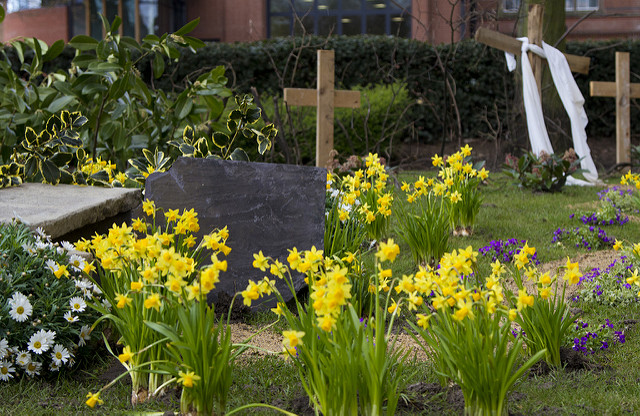 Easter preaching has to be imaginative preaching. It has to knock us away from predictability and restraint. Wonder, surprise, and new possibilities are stamped on every part of the resurrection narratives in Luke and John. Things are not what they appear to be. Tyrants don’t always win. Confusion gives birth to insight. Jesus appears in unexpected ways. Rules we thought were hard and fast no longer apply.

That’s why the lectionary asks us to listen to the Acts of the Apostles during the weeks of Easter. Acts makes no promises about trying to prove or explain Jesus’ resurrection. (Who can do that, anyway?) The book does, however, put us in an Easter state of mind.1 The thrills and exaggeration of the story Acts tells urge preachers to put aside cautious rationality and the canned wisdom of church consultants, just for a few weeks, and say to a congregation: look at what becomes possible in a post-Easter world.

Two Easters ago I wrote a piece that described Acts as book that expands imaginations. Here I am building on that, now with six texts from Year C (Easter 2-7) in view. Don’t treat these passages as dusty eulogies of Peter and Paul’s heroism or as moralistic tales about the power of standing firm in your faith. While each of these passages can lead preachers in many fruitful directions, I submit that together, during Eastertide, they prompt us to consider: what are the contours of an authentically Christian witness? To what, exactly, are we bearing witness as people who believe that death and the powers of this world do not have the last word? What kind of testimony do we give, as people whose encounters with a living Christ make us reject the cynical assumption that nothing will ever change?

Easter 2: Acts 5:27-32
Peter and his companions offer a basic summary of the good news in verses 30-32, but don’t miss the context for their mini-sermon: they stand before the highest-ranking priests and Sadducees. Those are the most powerful figures in Jerusalem; Pilate surely has returned to Caesarea after Passover. These members of the temple-based aristocracy don’t know what readers know, however, that an angel has freed Peter et al. from their attempt to silence and intimidate them. The leaders haven’t learned that incarceration can’t extinguish vocation. The conflict and upside-down expectations — and also the hope for renewal — first described way back in Luke 1-2 are real in the life of the young church.

Christian witness acknowledges the Easter reality that God can frustrate any weapon that the powerful employ even as God extends forgiveness also to them. New expressions of divine grace and hospitality may emerge from unlikely sources. These uncredentialled preachers from Galilee won’t shut up. After Easter, nothing can keep them caged.

Easter 3: Acts 9:1-6 (7-20)
The story of Jesus upending Saul’s perspective and commitments is also a story of Jesus transforming the wider church’s perspective and commitments, as seen through Ananias’s participation in the narrative. So do not omit verses 7-20. As we see elsewhere in Acts (such as Acts 12:6-17), miraculous developments carry things only so far; eventually people of faith need to answer a call, say something, and open doors to others. It isn’t enough for Saul to encounter Jesus on the road; he also needs a wider community of disciples to confirm his experience and help him move toward wholeness. Ananias, the face of that community, also needs a revelation. Something has to convince him that God is capable of bringing blessings to and through even someone as cruel as Saul.

Christian witness declares, as Ananias eventually learns despite his initial reluctance to believe that Saul is really the right choice, that God and not one’s past history gets to determine a person’s worth and potential.

Easter 4: Acts 9:36-43
The Gospels describe Jesus raising the dead, so maybe it makes sense that Peter (and later Paul, in Acts 20:7-12) gets a chance to be part of the action, too. But a sermon about Peter might make Tabitha/Dorcas into a passive object, just a corpse to revivify so we can have yet another symbol to help us think abstractly about life reemerging from death. I’d rather we talk about the ways that Tabitha/Dorcas promoted vitality herself, as an active disciple. Why does her death trigger such grief and alarm? Through her service she knit together a group of people. Did her Aramaic and Greek names mean she was a bridge builder, too, forging connections between groups separated by linguistic and cultural differences? Take a cue from the narrative (verse 39) and linger a little over the glimpse we get of the widows she knew and the clothing she created. “Good works and acts of charity” are never abstractions.

Christian witness, following Jesus’ lead, tangibly contributes to wholeness and flourishing. Through its cruciform familiarity with hardship and loss it builds new community. It reasserts human dignity, wrapping others like a garment in the warmth of love and honor.

Easter 5: Acts 11:1-18
This passage calls us to remember a radical and far-reaching development in the experience of the early church: the recognition that both gentiles and Jews share equal footing in God’s salvation. They belong together; the belong to one another. What’s striking here is how the recognition arises among the people involved. It begins and ends with Peter’s realization that Cornelius and his household received the Holy Spirit just as did he and his companions at Pentecost (see Acts 10:44-48). Case closed. Peter and those in Jerusalem interpret what has happened as a divine declaration. They did not anticipate this development, at least not in this way, but then again God surprised them at Easter, too.

Christian witness tells of God’s wide embrace. It understands hospitality and welcome as opportunities for salvation to be discovered, lived out, and reaffirmed. Pentecost, which is the climax of the Passion-Resurrection-Ascension narrative in Luke-Acts, has never ended. The Spirit continues to call people into a new, diverse community. Through Christ, God summons and welcomes all to dwell together in mutual relationship, belonging, solidarity, and peace. Anything that would produce factions or draw qualitative distinctions within that new unity is therefore a departure from the good news.

Easter 6: Acts 16:9-15
Once again, a story involves hospitality and charity — this time from Lydia. It’s difficult to interpret her. Some have taken her purple-cloth business as evidence of wealth and influence, or her role down by the riverside as a sign she leads a worshiping community. Others look at ancient sources that denigrate dye-work as a dirty and smelly task and conclude Acts depicts Lydia as a woman forced to operate “outside the gate” of the colony as an immigrant consigned to the periphery of public life in pompous Philippi.2 Whoever she is, whatever her privileges and obstacles, the good news goes to her, and her open heart has plenty of room to welcome others.

Christian witness is generous and happy to trust newcomers. Led by women and other saints willing to take risks, it creates community even if those communities attract scorn from others. That witness, born from an empty tomb not far from a site known for mass executions, knows how to take up residence outside the walls. For that’s usually where we have to go to meet God.

Easter 7: Acts 16:16-34
Burlesque is the dominant mood throughout this passage, but don’t let the caricature eclipse the danger, violence, and ugliness in Paul and Silas’s adventures in Philippi. In a very Roman locale, the good news sticks its fingers in the eyes of extremely powerful economic and political interests. Those kinds of interests have a lot to lose. They won’t tolerate embarrassment. Some people even take recourse in a kind of ethnic survivalist mentality, accusing the Jewish missionaries and the ways of their “Most High God” as bad for business, culture, and the benefits that nationalism bestows on a dominant group. On one hand, Acts illuminates the abuses of empire; on the other hand, this scene’s winners-take-all outlook is not so helpful for modern interfaith cooperation.

Christian witness nevertheless recognizes that emperors and their nativistic rhetoric have no clothes. Magistrates and others who give themselves to systems of torture and humiliation cannot plead ignorance. Our Easter-informed witness speaks boldly to power but it refuses to adopt this passage’s bravado or speak its language. It disavows efforts to make public vindication its chief goal. Rather, it sings an almost ridiculous hope that even a torturer might see the truth and become a generous host.

1For more on Acts and how its wild and sometimes frustrating story shapes imaginations about God, the gospel, and the church’s ministry, see my book Intrusive God, Disruptive Gospel: Encountering the Divine in the Book of Acts (Grand Rapids: Brazos, 2015).

2See Ivoni Richter Reimer’s helpful exploration of this mysterious yet prominent character in Women in the Acts of the Apostles: A Feminist Liberation Perspective (Minneapolis: Fortress, 1995), 71-149.