Jesus and the Crowds 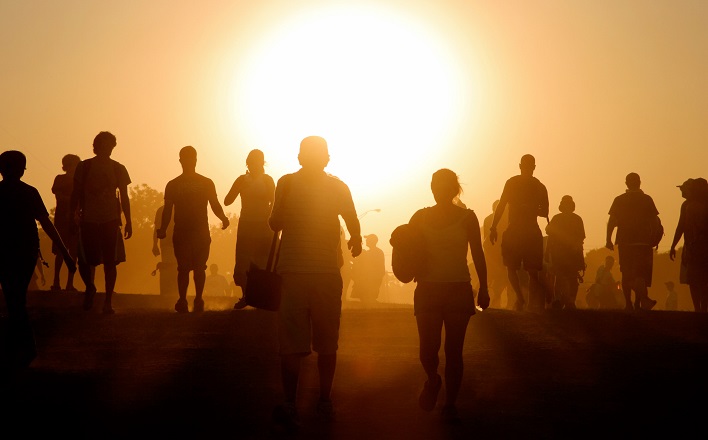 Photo by Keren Fedida on Unsplash; licensed under CC0.

Perhaps because, like many folks, I’ve spent the last two years carefully avoiding large groups of people, I find myself fascinated by the ubiquitous crowds that swarm Jesus in all four Gospel accounts.

Jesus has compassion on the crowds, healing them and feeding them. Yet he also has to work to avoid being crushed by them (Mark 3:9), and people trample on each other as they throng around him (Luke 12:1). Sometimes the crowds are a buffer between Jesus and the officials who want to arrest or kill him (e.g., Mark 11:18), and yet the crowds also shout, “Crucify him!” (Mark 15:13).

In this week’s Gospel text from Luke, Jesus has already done the ancient world’s equivalent of “going viral” after rebuking demons from a man in the synagogue at Capernaum: “And a report about him began to reach every place in the region” (Luke 4:37). The crowd continues to seek him out the next day and to prevail on him to stay with them, even as he seeks out a “deserted place” (Luke 4:42). Now, at the water’s edge, the crowd has Jesus trapped against the lake. There is nowhere for him to go but into the water. He steps inside a boat and resumes his teaching off shore.

Luke writes that “the crowd was pressing in on him to hear the word of God” (5:1b). The frenzy implied here is something I associate more readily with the Beatles or a midnight Black Friday sale than with the life of Jesus. What’s more, it’s difficult to imagine crowds clamoring to hear the word of God in our current age. Let’s face it: the world generally looks elsewhere for its hope these days. This is a strange scene.

Ah, but Simon, soon to be Peter—here we are in familiar territory. I can picture this exchange very clearly. Jesus tells him to do something, and Simon’s response is we’ve already tried that and it didn’t work. On that rock of fatalism many church committee meetings have been built.

In Simon’s defense, fishing is his realm of expertise; Jesus, after all, is the son of a carpenter, not of a fisherman. I’m sure Simon thought Jesus sounded like a wise teacher of the word of God, but why would Simon take fishing advice from him? Nothing of what Simon knows about his trade suggests doing the same thing again is going to yield a different result.

Despite his skepticism, Simon agrees to let down the nets once more, and they come up full to bursting. The plentiful fish are a sign, a miracle that leads Simon Peter to call Jesus “Lord.” But notice that the fish are not the endgame in this story.1 These fishermen don’t suddenly get economic prosperity and an easy life. The fish are the match that lights the fuse for discipleship. The abundant catch ignites amazement, the amazement leads to recognition, and recognition leads to an explosive commitment: Simon Peter, James, and John “left everything and followed him.” They have the best day of work they’ve ever had, and yet they abandon it all to follow Jesus. Their wonder spurs them to leave the thing they know how to do behind, and to take up a life they know nothing about.

I see so much of the work of the preacher in that first moment of amazement, when Jesus opens Simon’s eyes to wonder and possibility in the face of we’ve already tried that and it didn’t work. Good preaching, too, pushes through skepticism and fatalism and opens people’s eyes to the wonder of the gospel, lighting a spark that leads to explosive commitment.

Admittedly, I’m always reluctant to make analogies between Jesus and pastors, lest the lines be too starkly drawn. As you well know, you’re not Jesus, and you don’t have to work miracles. Nor does a sermon require outsized theatrics or clever gimmicks to inspire wonder. Rather, the preacher tells the wonder-full stories of the faith, glimpses of the impossible experienced in the here and now.

Wonder, as the psalmist reminds us, is in the everyday miracles as well as the big-ticket ones: “When I look at your heavens, the work of your fingers, the moon and the stars that you have established; what are human beings that you are mindful of them, mortals that you care for them?” (Psalm 8:3-4).2 The familiar poems of the English Romantic poet William Wordsworth also point us toward the wonder of the natural world: “My heart leaps up when I behold / a rainbow in the sky.” Tales of a scientific discovery, an act of selfless love, an intergenerational friendship, a moment of peace in the midst of chaos—there are infinite ways to make visible the outrageously abundant possibilities that life with Jesus opens to us.

The Rev. Bill Chadwick, visitation pastor at my church and a very engaging preacher, likes to respond to the compliment, “Good sermon, pastor!” with the retort, “We’ll see.” That is, a truly good sermon in his estimation is not one that people enjoy hearing, but rather one that spurs people on to doing—to living out discipleship in new, even radical ways. There is a challenge in this standard, but also a hopeful reminder that the fruits of your work preaching the gospel week in and week out may not be obvious right away, or even ever be known to you. You strike a lot of matches and light a lot of long fuses that lead from amazement to recognition to explosive commitment, even if the crowds aren’t clamoring at the church doors. Keep up the wonder-full work, Working Preacher.