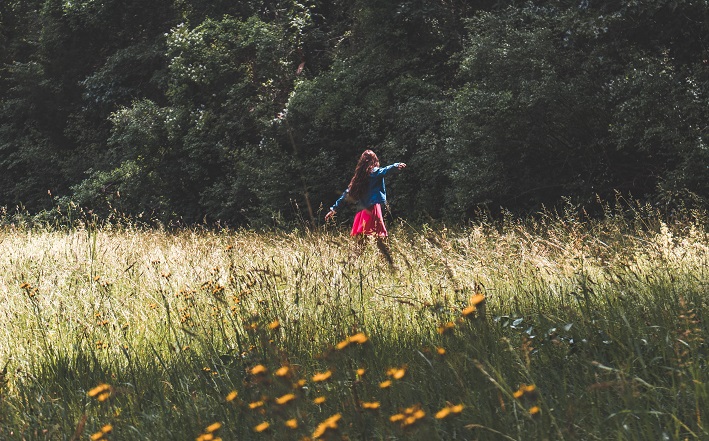 Photo by Jack Ward on Unsplash; licensed under CC0.

There is a scene in the book Harry Potter and the Chamber of Secrets when Harry and his friends go to a party for ghosts, celebrating the 500th “Death Day” of Nearly Headless Nick, one of Hogwarts Castle’s friendly spirits.

There is a huge feast set out, but as Harry and his living friends approach the buffet tables, they notice putrid smells and other signs of rot emanating from the food. It turns out that in Harry Potter’s magical world, ghosts can’t eat! The ghosts leave the food to turn rancid so that they can better smell it when they glide through it—the closest they can come to actually eating.

The Gospel of Luke doesn’t think ghosts can eat, either. It takes great pains to illustrate that after his resurrection, Jesus is right there, in the flesh, not as a ghost.

“Touch me and see; for a ghost does not have flesh and bones as you see that I have,” says Jesus (Luke 24:39). Not-a-ghost Jesus appears to be hungry, too, and he asks the disciples for food. He eats broiled fish “in their presence,” emphasizing again that they can see that Jesus’s body is functioning like one would expect a living human body to function. All the repetition of language about seeing and showing and presence shores up the disciples’ role as witnesses (verse 48) to the resurrection.

Luke goes on to wrap up the resurrection into a neat package with a pretty bow. This fleshy, fish-full Jesus explains that Scripture has been fulfilled to the letter, God’s promises have all been kept, and the disciples’ terror has been replaced with understanding (verse 45). Jesus makes a grand-finale exit (verse 51). Everything is explicable, visible, resolved. Nothing remains to haunt us.

This is a very different ending than the one we find in the original ending of Mark, the earliest Gospel, where the final image is of the women fleeing from the tomb in fear (Mark 16:8). Nothing there is wrapped up, nothing is explicable.1

I suspect many of us would respond in favor of Luke’s Gospel. Answers can be a comfort, and surety provides stability.

In Luke’s telling, the great enigma of the Old Testament is decoded (never mind that most of those ciphers are shared only with the disciples, not with the readers), and neither terror nor doubt nor wonder lingers—only joy. Of course, I have nothing against joy, and I have no desire for more terror or more doubt. I worry, though, about the loss of wonder.

In his book Sacred Sense: Discovering the Wonder of God’s Word and World, William P. Brown charts wonder through the Bible, arguing that wonder “lies at the heart of biblical faith.”2 Wonder is not the same as unadulterated joy or a banal and passing interest. Instead, the astonishment of wonder can be coupled with both fear and desire: “On the one hand, wonder carries the unsettling element of bewilderment. On the other hand, there is the element of insatiable curiosity or the passionate desire to know. Wonder, thus, bears an inner tension.”3

Brown points to the resurrection account in the Gospel of Mark, which he dubs the “Gospel of fear,” as an example of the generative wonderment born of fear: “And the root of such fear is Christ’s unexpected resurrection, an event deemed unfathomable and insurgent, resisting all sense of closure and containment. […] Resurrection is beyond mental grasping because it heralds the unimaginable: an empty tomb emptied of death.”4

By contrast, Luke 24:36-53, our Gospel text appointed for this week, chafes against wonder, preferring instead an answer-filled certainty. At least as far as the disciples go, the great mysteries surrounding resurrection are solved, enclosed, contained. There are no ghosts left.

The challenge for any preacher working from Luke’s Gospel this week is not to suck the wonder out of the resurrection.

I’m not saying preachers need to chuck out the lectionary’s choice of Luke in favor of Mark (though that is certainly an option). Nor do I claim there is nothing edifying to be found in Luke 24; its emphasis on Jesus’s body, for instance, is a beautiful reminder that Easter faith is not merely a question of soul or spirit, but also of our physical bodies moving through creation.

Nonetheless, the neatness of the end of Luke 24 should also prompt us to some healthy skepticism, both of the text and of our own preaching. When are we in such a hurry to explain things that we foreclose the opportunity to linger in our astonishment? When are we so eager to feel unafraid that we do not allow our fear to prompt us into wonder?

If our faith is stripped of wonder, we are left with a set of theological claims that we have to defend. Our posture toward God and toward each other is closed off as we hold on to our answers.

Preaching wonder allows us to admit that faith is full of mystery, that there is no secret code to unlock the meaning of Scripture. Most crucially, preaching wonder reminds us that we need each other, a community of interpreters, believers, and doubters, to navigate the terror and bewilderment that come with life—and death—in this world.