The Power of Names 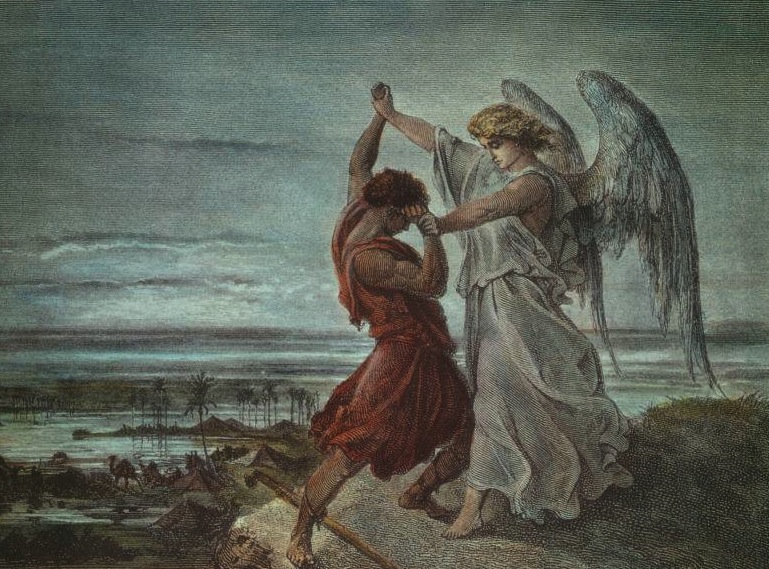 There are some homiletical themes that are so powerful you need to be prepared ahead of time for the impact they may have.

This week’s first reading, from Genesis 32, is one of them. While the story of Jacob wrestling with an angel is chosen to complement the Gospel parable about persistence, I think the heart of this curious story is really about the power of names: the names we’ve been given, the names we’ve taken on ourselves, the names that limit us by defining us, and — preeminently — the new name God gives each one of us. So if you’re willing to follow me down this homiletical track, you might also want to clear a little more time over the next week or two for the pastoral conversations this sermon stirs up.

Let’s first set this story in the larger saga about Jacob. The events divide into two main parts. The first revolves around his immediate family. Jacob, as you may recall, is the second born of the twins granted to Isaac and Rebekah. He is not only the younger of the two but also the more slight of stature, and so he learns early on to live by his wits rather than his strength. His brother Esau, by contrast, is a wild and woolly hunter, and, as the eldest, is heir to his father’s blessing and fortune.

The rivalry between these two siblings — Esau favored by his father, Jacob by his mother — is palpable throughout the narrative, but it erupts most fiercely on two distinct occasions. The first takes place when Jacob demands from his famished and perhaps foolish brother his birthright in exchange for a pot of stew. The second occurs a few years later when Jacob, coached by his mother, deceives his old and half-blind father Isaac into thinking that he is his brother and in this way steals Esau’s blessing. The first act in the drama of Jacob’s life closes with his brother’s distraught and enraged wails providing the backdrop to Jacob’s cowardly flight to the household of his uncle Laban.

The second movement in this drama revolves around Jacob’s years with his equally deceitful uncle. Time and again these two will match wits, until eventually Jacob must flee once more, taking with him two of Laban’s daughters, most of his flock, and much of his fortune.

Jacob is still enroute from Laban’s home in the scene immediately before the events we just heard described when he receives word that his brother Esau is coming to meet him with an army of four hundred men. Sitting, as it were, between a rock and hard place, Jacob hides away half of his wealth, and then, with what is left, he sends three caravans of gifts ahead to Esau, intending to bribe his way back into his brother’s good graces. This Sunday’s reading picks up the narrative just as Jacob, fearful that all his plans and schemes will come to naught, sends the rest of his servants and family across the river, hoping, perhaps, that even if Esau refuses his tribute he may, at least, take pity on Jacob at the sight of his defenseless wives and children.

And then it happens….  Pacing by the dark and troubled river and accompanied only by his own frustrated schemes and feeble contingencies, Jacob is attacked by what can only seem like a demon. All night long the two wrestle, until, as daylight approaches and Jacob seems on the verge of prevailing, his opponent dislocates his hip and demands release. “Bless me, first,” Jacob cries, perceiving that, whether demon or angel, this is no ordinary creature. To which his adversary, soon to be revealed as the Lord, responds, “Tell me your name.”

Now here we must pause, for to perceive aright what has just transpired we need to recall the significance that names held in the near-Eastern cultures from which our Bible comes. For far from merely identifying a person, names in Jacob’s culture reveal one’s essential character and sometimes their destiny. And so to know a person’s name is to have a certain power over that person, for no matter what he or she says or does, you can reply, “Hey! — You can’t get away with that; I know you.”

Now Jacob’s name means the usurper, the supplanter, or, more loosely, the cheat, for he is the one who came from his mother’s womb already grabbing his brother’s heel. And how appropriate a name it is, for all of his life Jacob has devoted his energy and wit to usurping what rightfully belongs to others. That is, Jacob at heart is nothing more than a fraud, a common trickster, charlatan, and scoundrel. And deep down, you see, Jacob knows this. And so when the Lord pins Jacob down and demands to know his name, he is demanding no less than that Jacob confess — confess his ill-gotten gains and shoddy character, confess his misused talents and wasted life. And to do this, to come clean, is for one such as Jacob nothing less than death, for when the con man and phony is revealed for what he is, what has he left?

Viewed this way, we can hardly refrain from rejoicing at this scene, for at long last Jacob is about to receive his proper comeuppance, to be put in his place once and for all and finally get what he deserves.

Except … except that in the face of Jacob’s confession of his name, the Lord — far from doling out the punishment Jacob both certainly merits and probably expects — the Lord gives Jacob a new name. He calls him Israel, the one who has wrestled with God and with man and has prevailed. And so the scene concludes with Jacob limping away from this contest not defeated but victorious, carrying a new name and character and living life as a new person. For not only will Jacob and Esau be reconciled in the chapters to come, but Jacob will also sire a nation from his twelve sons and they and their descendants proudly bear his name even to this day.

This tale, as phenomenally bizarre as it is, has been for years one of my favorites simply for the way it so clearly and forcibly illustrates our understanding of Holy Baptism. For in Baptism we, too, are given a new name, as God beholds us, calls us God’s own, and names us Christ.

In the congregations I served we typically avoided at nearly all costs referring to Holy Baptism as a “christening,” for we both preferred the biblical word, Baptism, and wished to distinguish our sacrament from the common naming of inanimate objects, say, like ships. And yet this word also can be useful to us, for christening originally meant just what it sounds like, as in Baptism we are “Christ-ened,” that is, called by the name of Christ and made to be like him.

For this name, our new name, not only describes us, but in time it also circumscribes all of our living and being as we more fully understand that in Baptism God has promised to regard each and all of us always as God’s own beloved child and to account Christ’s righteousness as our own.

And this is where things get powerful, Working Preacher. Because if truth be told, we are each called by so many names day in and day out — some of them good and affirming, many more not — that it can be terribly difficult even to hear, let alone believe, that God chooses to call us Christ. And yet there it is, in the eighth chapter of Romans which simply brims over with baptismal imagery, Paul’s promise that the Holy “Spirit and our spirit bear united witness that we are children of God; and if we are children, then we are heirs as well, heirs of God and co-heirs with Christ.”

And so maybe the task before us this week, Working Preacher, is to invite our people to confess their names. Whether silently or by writing them down on a paper, ask them first to answer this one question: Who are you? Really. What is your name? What is it that others call you?  More importantly, what is it that you call yourself? What is that name you can scarce speak for fear or shame? Scoundrel, cheat, or phony like Jacob? Unworthy, irresponsible, unfaithful? Discouraged or burnt-out? Divorced, deserted, or widowed? Coward or bully? Unloved or unloving? Disappointed or disappointing? Abused or abuser? Ugly or abnormal?

This won’t be easy to do, Working Preacher, as admitting the power of these names over us implies a significant amount of vulnerability. But I think that only as we confess the names we wear and bear can we also hear God’s unrelenting response: “No! No! You are Christ! To me you are Christ! You are my beloved, the one I chose and redeemed at great cost, the one to whom I am committed and to whom I promise to protect and care for all the days of your life. For you are my child. You are Christ!”

What if we imagine, Working Preacher, that church is a place we can come to each week and bring all our other names with us, confessing them honestly and then leaving them behind, departing the assembly simply as Christians, those who bear the name of Christ and armed with the love, commitment, and courage of the God of Abraham, Isaac, and Jacob, the God of Israel, the God and Father of our Lord Jesus Christ.

Names, as we know, can limit us, hurt us, even kill. But so also can they heal and make alive. And so a part of what we do each week, I believe, is to invite people to come and be reminded once again of our true name and new identity so that we may go out into the world as new persons, as God’s own beloved child.

Thank you, Working Preacher, for the courage to invite us to confess and the faithfulness to respond to that confession with the promise that we share Christ’s name and inheritance. It’s a powerful message, and I’m grateful you’re willing to share it. Blessings on your proclamation.