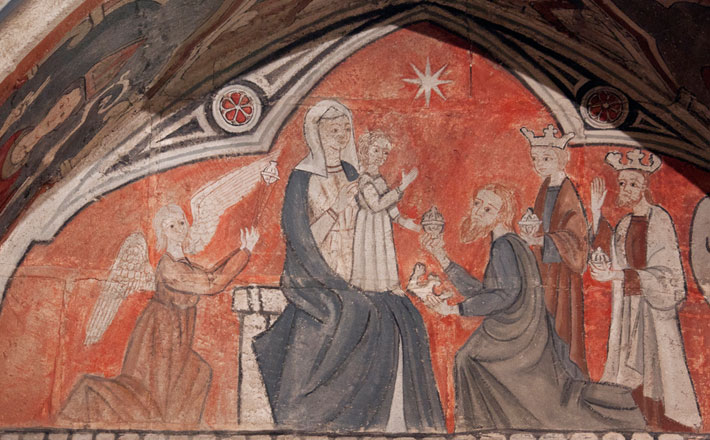 Some congregations choose to use the Epiphany readings on the second Sunday after Christmas. In the Western Church, the visit of the magi seems to have been associated with Epiphany from the beginnings of the festival.1 The origins of the Epiphany festival are obscure. As the name suggests (epiphaneia), however, the festival seems to have focused from the beginnings on the “revelation” of God in Jesus (originally including celebration of the birth of Jesus, before the Christmas festival was instituted).

Popular interest in the story may focus on such things as the names of the magi (or “three kings”),2 the giving of gifts, the star of Bethlehem, and King Herod’s machinations. However, the historical details of the story are difficult to substantiate.3 It should be observed that the story has an important narrative function in Matthew. The visit of the magi to “worship” (or “pay homage to”) Jesus alarms Herod, who, after he has been fooled by the magi (2:16), will resolve to kill all the (male) children in Bethlehem and environs two years and younger. Herod’s plot constitutes the reason for the holy family’s flight to Egypt and return. The flight to and return from Egypt together with the slaughter of the innocents serve to make Jesus into a type of both Moses (who was also delivered from a cruel tyrant; Exodus 1-2) and the nation of Israel as a whole (God’s “Son” whom he called out of Egypt; Matthew 2:15; Hosea 11:1). As such Jesus is the fulfillment of prophecy and of the (hi)story of Israel. Later in Matthew Jesus will play the role of a new Moses (5:1) and of a new “Israel” in the wilderness who remains faithful to God in temptation (4:1-11). So also the story of the magi shows Jesus to be the fulfillment of prophecy (see below). The interpreter and preacher must keep the story’s narrative function and theological emphases in mind.

The story in Matthew can be divided into five scenes: the arrival of the magi (2:1-2); Herod’s alarm and consultation of the priests and scribes (2:3-6); Herod’s request of the magi (2:7-8); the magi’s visit and adoration of the Christ child (2:9-11); and the departure of the magi (2:12). The first, third, and fourth scenes are punctuated by the verb “worship” or “pay homage” (proskynein), which highlights a main feature of the narrative: the magi take the role of the Gentiles who will come paying homage and bringing gifts to the Messiah according to Psalm 72:10-11. The sincerity of the magi’s worship of Jesus is contrasted with Herod’s insincere pledge to worship Jesus. In reality, King Herod will try to eliminate this newborn, rival “king of the Jews,” who threatens to usurp his title! Matthew probably has Jesus’ death already in view when he has the magi refer to Jesus as “the king of the Jews” (2:2) rather than as Christ (cf. 2:4), in anticipation of the charge under which Jesus will eventually be crucified (27:11, 29, 37) (Matthew uses the title only in these places).

The magi, who are said to come from the “East,” give the story an exotic flavor. Ancient magi were persons reputed to be adept at astronomy as well as various occult arts, such as astrology, interpretation of dreams, fortune telling, and magic. Here they are clearly thought of as astronomers or astrologers, who have found the rising of a star to be of world-historical significance. It was a common idea in antiquity that the birth or death of great men was accompanied by heavenly signs.4

But there is more than meets the eye in the identification of these magi as from the “East”. The word used for the “East” in the story, anatolai (plural)/anatole (singular), really means “the rising,” that is, the rising of the sun (our word “orient” comes from a Latin word with the same meaning: oriens). The word anatole would have had a number of resonances for the first Greek-speaking, Jewish-Christian hearers of Matthew’s story. First, the rising of the sun in the East readily suggests the imagery of light, which is often associated with salvation in the Bible. The Old Testament reading for the day (Isaiah 60:1-6), to which the magi story clearly alludes (see especially verses 5-6), begins with the words, “Arise, shine; for your light has come, and the glory of the Lord has risen upon you.” The verb for “has risen” here, in the Septuagint translation, is anatetalken, from the same root as anatole. Isaiah’s vision of salvation includes a pilgrimage of the nations, who will come to Israel’s light, to worship the God of Israel. The Gentile magi are to be understood as enacting the fulfillment of this prophecy.

The verb anatellein appears with equal significance in other texts. We may mention first Numbers 24:17 (Septuagint), which speaks of a star that will rise out of Jacob. This verse was interpreted messianically in Judaism, and it is easy to see how a star could become a symbol for the Messiah. The star of Bethlehem is to be understood against the background of that text. The star indicates that the Messiah has arrived. Anatellein appears again in Matthew 4:16. Matthew comments on Jesus’ appearance in Capernaum with a citation of Isaiah 8:23-9:1, which speaks of light shining on those who dwell in darkness. Matthew chooses the verb anatellein (not in the Septuagint). His usage is very similar to Luke 1:78-79, which speaks of the “dawn (anatole) from on high” that “will break upon us” (NRSV), to give light (epiphanai) to those who sit in darkness and in the shadow of death, also an allusion to Isaiah 9:1; 60:1-2.

Finally, the word anatole is used in Jeremiah 23:5 with a different, but related meaning. Here the word refers to the righteous branch of David, that is, the Messiah. The branch that shoots up from a tree is a “rising” of a different kind (cf. Isaiah 11:1).

These (and perhaps other) Old Testament texts have undoubtedly lent their emphases on the coming of light, of the Messiah, and of salvation to the story of the magi. While Matthew’s gospel ends with the risen Jesus’ command to the disciples to go out from Galilee to make disciples of all nations (28:19), the gospel begins with an anticipatory visit of the Gentiles to Judea to worship the newborn Messiah. The magi stand for all the nations, including us, who would come to worship Jesus, the Messiah of Israel (Psalm 72:10-11), and see the manifestation of the glory of God in the face of Jesus (Isaiah 60:1-2; cf. John 1:14; 2 Corinthians 4:6).

2 That the magi were kings is only a later Christian tradition developed under the influence of Ps 72:10-11. That there were three magi/kings is not stated by Matthew but was deduced from the three gifts in Matt 2:11.