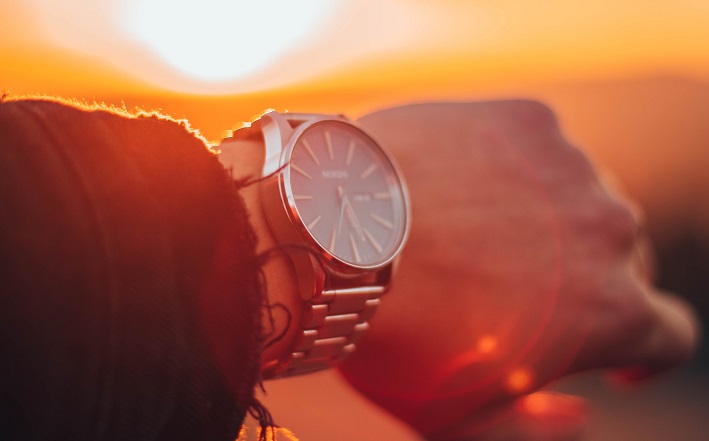 Photo by Lawless Capture on Unsplash; licensed under CC0.

One of our greatest challenges as we navigate our calling to public ministry is telling time.

Is my service to this community winding down, or just in need of some fresh initiatives? Is this the occasion for leading from the front or from behind? Is it time to shepherd this congregation into a period of challenge and discomfort? Do I tell them that the clock has run out on an old, tired program? What does the current hour demand?

When Jesus calls disciples to follow him, as in the first chapter of Mark, we sometimes miss the gravity of the moment, because we focus on the sacrifices made. It’s easy to see the consequences of those callings in terms of lives changed and identities altered. Nets lie on the shore untended. Zebedee sighs, in either exasperation or pride, and wonders when he’ll get to see his sons again.

Those of us who are familiar with talking about vocation quickly jump from Mark 1 to other biblical “call narratives” and note the connections to Moses, Gideon, Samuel, and Mary of Nazareth. That’s a worthwhile interpretive move; but it doesn’t do justice to the ways in which God’s calling isn’t just the selection of a person. It’s also a response to circumstances, the beginning of a new chapter.

We are too accustomed to viewing the story in Mark 1 as a HEY, YOU; YES, YOU story. But I don’t think that’s entirely right.

It’s more accurate to view what happened on the lakeshore as an IT’S TIME story. When Jesus first summoned Simon, Andrew, James, and John (and maybe also when he called Mary Magdalene, Mary, Salome, and others), those people weren’t encountering a charismatic stranger for the first time. It’s not that he suddenly broke into their lives announcing that their number had come up in the great discipleship sweepstakes. They were hearing a familiar preacher and perhaps even a friend telling them that the time for a new direction or a new intensity had arrived. Jesus was ready and now—now!—they needed to be, too.

Galilee was (and still is) not an especially large region. People knew each other, traveled around, and talked. If Jesus had any public celebrity or notoriety in that area, people would have heard of it. But something was different in the preacher’s eyes and his gait that day.

He believed “the time is fulfilled”; the opportunity was ripe. The Holy Spirit possessed him. He had heard God’s calling and affirmation. With angelic help, he passed satanic tests guided by his commitment to a ministry of self-giving, enemy-loving faithfulness.

And Herod Antipas had taken the brazen step of arresting John the Baptizer. Enough was enough.

In short, Jesus himself had come to believe what he told the people who became his first followers: It’s time. Time to move from preparation to action. Time to stop hoping for change and start laboring for it. Time to enlist help in a ministry that was about proclaiming repentance, urging people to adopt a new outlook on their world and their place in it. That new outlook acknowledged a gracious God’s authority over the things that never stop enabling death and oppression.

Time to discover if all this preaching can actually change the world and liberate people.

Time to fish for something greater and more lasting.

Is it time for you to do or declare something, Working Preachers? I can’t pretend to know what that is for you, in light of your ministry in the places you inhabit. I can’t read your conscience or know how open or resistant your audiences are. I don’t know how much adversity you carry thanks to this damned pandemic.

Yet I believe it’s likely that God is calling you to stand up and get busy in some new area, following Jesus into a new season of discovering how the Spirit is forming you and the people you serve.

Congregations rely on their leaders to help them tell time. So much of contemporary theological discourse and seminary education is so weak on eschatology that we don’t think much about our calling to be timekeepers. Rather, we’ve grown comfortable with a routinized gospel.

Changing a congregation’s direction in living out its ministry and learning to think differently can’t be an organizational strategy. It’s a calling. Accordingly, it takes a thoughtful, courageous, loving, prayerful, self-aware, and sometimes slightly reckless leader to discern how, when, and how much to move the rudder. What is compelling you to act, to speak, and to follow in new ways right now?

With all of the unmistakable unrest and threat in the air today, your preaching vocation demands that you be alert and attuned to developments in news cycles and to the cloistered suffering that so many are experiencing where you do ministry.

You know what it is to make hard decisions about whether to rewrite the sermon or how to speak about the stories of our time. If it sounds like I’m being unspecific, that’s just because I have no idea what will transpire in the days between my writing these words and your reading them.

I do know, however, that you’ve been called. And part of that calling is to know when it’s time. Or—better—you’ve been called to discern when it’s time. What a scary responsible to navigate. But think of all the people who are waiting for the good news that the chapter can and will turn. Those are the people who will hear the proclamation “Time’s up” and experience untold relief and freedom.

Good thing you know the Christ who leads you onward in this work.