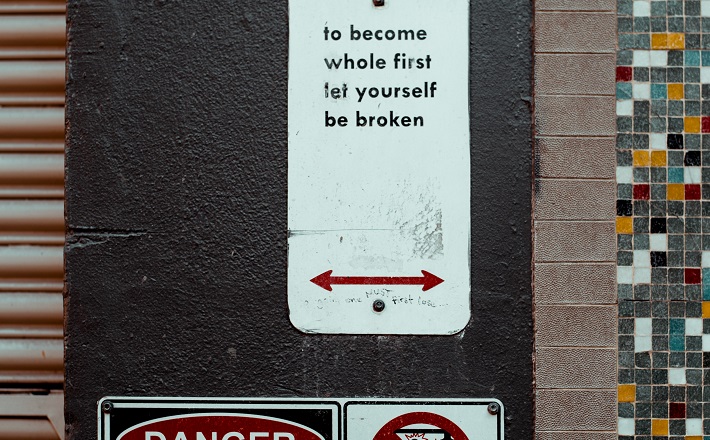 "to become whole first let yourself be broken" Image by Annie Spratt via Unsplash; licensed under CC0.

This week I’ve found myself struggling to switch my voice from a local congregation in Flint, Michigan, to you who preach in various locations around the world. More than time and commitments, I’ve wrestled with how to encourage you with the variety of concerns that clamor for our attention from local unrest to global news.

The word unprecedented is repeated daily in our news. What should take precedence in your context? Are the concerns that capture my attention those that beckon you?

When Gary Haugen introduced International Justice Mission to the world, he asked the question: Are the concerns of God the same things that concern us? As you preach this week, your listeners will have been scattered amid rising political polemics, social unrest, and environmental warning. As you prayerfully prepare to offer exposition on the texts to the gathered community in worship, it is important that we remember the weighty words of this week’s texts are spoken into a reality that appeared, in their time, no less complicated.

Now, what would you, could you, should you say, if you have the undivided attention of your main critics? This week there seems to have been a particular display of responses in society. In the Old Testament texts, the setting of the discourses resembles our present cultural reality of trying to offer a warning in the midst of rancor:

After a week like this last one, I am as interested in audience as the message. Sometimes we need to step back in order to take a closer view. So as I sit down to consider you the reader, I also have in mind your varied communities.

It’s easy to forget the settings in which Jesus delivered his discourses. Luke’s edits of the events and narratives seem to go on and on, producing the familiar “red-letter” sections of the third Gospel. Two-thirds of the way through Luke, Jesus has been speaking to two groups of listeners: (a) those who listen in order to discover points with which to agree; and (b) those who listen to discover what they can argue against. Jesus has told stories to fishermen of shepherds herding sheep and to men of women finding coins.

Now Jesus addresses religious leaders who value money, telling a story about a rich man who can only learn through death the implicit biases he has carried his whole, entitled life. While the unnamed rich man lived with the benefit of shelter, strength, and surplus, he ignored and neglected the neighbor in his own backyard. Lazarus, the neighbor who was without the luxuries of privilege, now rests with Abraham.

The last claim in this passage is more than cautionary to Jesus’ hearers; it is prescient: “If they do not listen to Moses and the prophets, neither will they be convinced even if someone rises from the dead” (Luke 16:31). All the warnings of the past have been neglected. We who live on the other side of Jesus’ resurrection hear this word from Jesus ringing with harsh truth.

If your sermon turns attention to actual riches, consider whether the idea of wealth as a blessing focuses our attention toward the promises of God and its consequential responsibilities. Or does wealth in the present moment distract us from just actions that impact the future?

In what ways might your congregation’s deferential—and therefore detrimental—behavior toward those possessing wealth impact the spiritual welfare of those community or congregation members who have fewer possessions?

The psalmist’s call for trust in God explicitly rejects placing one’s confidence solely in those with positions of worldly influence. Likewise, your prophetic voice this week serves to encourage your congregation to demonstrate—to live out—pastoral acts of grace.

God’s concerns have always been with the concrete and the cosmic, with the universal and the individual, with the prophetic and the pastoral. As this week’s commentary reminds us, our confession should lead to a life that is faithful.

As you approach the pulpit this week, remember who is listening to your words. Balance the prophetic pronouncements in your sermon with a concern not for how you are being received, but how those who gather in worship this weekend will be heard in their places of influence to which they scatter in the coming week.