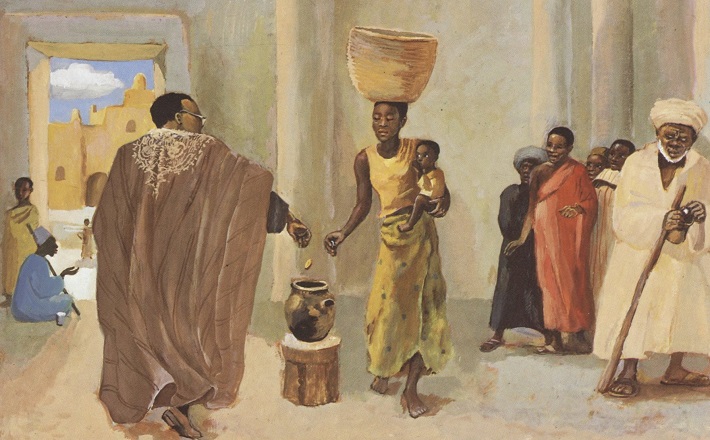 The break between Mark 12:40 and Mark 12:41 with captions such as “The Widow’s Offering” or “A Poor Widow’s Contribution” or “An Act of Faithfulness” prompt readers to read 12:41-44 as a separate, distinct story from what precedes.

But this was more than a story about faithful giving. Yes, this widow “put in everything she had.” Yes, this woman, in this act of giving, acts unselfishly (even if unwisely). Yes, this unnamed character did what she thought she needed to do.

Furthermore, Jesus made the act of giving the point of his teaching. While he may not have concluded the observation by saying, “So, should you give all of your possessions,” he did seem to imply such an idea with his comparison to those who gave only some of their abundance. Yet, the story seems to be about more than that. Rather, this was a story — especially in Mark’s narrative order — that exposed the religious leaders for their hypocrisy. And, it may just expose us all!

After a positive encounter with one scribe (cf. Mark 12:28-34), Jesus challenged the scribal teaching about the relationship of King David to the figure of the Messiah (cf. 12:35-38). Expectations about a coming Messiah were commonplace, even if the particulars circulating among the scribes differed from Jesus’ expectation. But Jesus had no inquisitors this time, so he proceeded to discuss also the behavioral practices of some of the scribes he had encountered.

His tirade against the scribal class offered a harsh critique of their pride: desiring the best seats at synagogue or greetings of honor in the agora. In an honor/shame society, desire for “honor” was not unusual. Even Jesus expected it himself at certain times (cf. Mark 6:4). In fact, Jesus granted public honor to the scribe who agreed with him in 12:34.

But the critique (or, slander?) of their practices became more serious, as Jesus questioned their economic policies, cheating widows out of their homes. The NRSV translation — “they devour widows’ houses” (Mark 12:40) — is unclear. Did the scribes find ways (legitimate or otherwise) to take houses away? Or, did travelling scribes use up the resources from widows’ homes? Apparently, Mark wanted readers to see a connection between this activity and the following story, in which Jesus observed a poor widow (vv. 41-44). Mark used the term “widow” (chera) only in these two stories (cf. 12:40, 42, 43).

The scribes and Jesus were in tension throughout Mark’s Gospel. This tension was established right in the beginning of Mark’s story. A group of people classified Jesus’ teaching as possessing an “authority” the scribes they knew didn’t have (1:21). Oftentimes the scribes mistrusted Jesus’ various activities (cf. 2:7, 16; 3:22; 7:1, 5; 11:18, 27-28). In return, Jesus and his disciples questioned the influence of scribal teaching (cf. 9:11; 12:35). At one point, the disciples, without Jesus’ around, argued with scribes over an ailing child (cf. 9:14). As his mission continued, Jesus recognized their antagonism, predicting that they would “reject” him (8:31) and, eventually, “condemn him to death” (10:33). So, Jesus’ public critique, in 12:38-40, fit into the larger pattern of conflict that Mark portrayed. Within this portrayal, the only exception to the theme was the one individual scribe who agreed with Jesus over the greatest commandment to love God and neighbor (cf. 12:28-34).

Juxtaposed with the scribal class was this widow. She, too, became an example in Jesus’ teaching, a positive object lesson, someone to observe. She was unnamed and Jesus didn’t address her directly.

Jesus’ public ministry, in Mark, did not emphasize a mission to the economically impoverished. [This is not Luke’s Gospel!] In fact, the specific language of “the poor” was uncommon in this Gospel. The first time Jesus expressed a direct interest was in a conversation with a wealthy individual who desired to know how to gain a more meaningful life (cf. 10:17-22). Jesus responded clearly: “sell what you own and give the money to the poor.” The man couldn’t do it.

This poor widow, however, did just that. She gave it all. Jesus’ observation about the “poor widow” who sacrificed the only economic resources she had left was a natural progression from Jesus’ critique of scribal abuse of the widows’ homes. In the Greek text, this passage flows syntactically from the other one without any evident linguistic break. In light of the context of conflict between Jesus and the temple leaders, this story was more likely a condemnation, rather than a commendation; that is, it highlighted the ways the “treasury” (of the scribes) consumed the means of the poor.

Of course, despite centuries of interpretation, Jesus did not criticize the Temple directly here. Rather, he challenged the leadership to practice more just ways. Furthermore, his observation about this widow fit the pattern of several prophets who preceded him, in which widows were associated with other vulnerable people, orphans and immigrants (cf. Jeremiah 7:6; Malachi 3:5).

The widow still gave! Is it possible to understand this story from her perspective? Even while Jesus may be critiquing the financial strains religious leaders and their institutions place upon the impoverished, this widow gave … out of a sense of obligation, perhaps. Perhaps, out of a sense of hope. In ancient Israel, the “poor” were not required to give; they simply did so because they believed in the goodness of the institution, the goodness of its leaders, and the need for the religious institution to remain. Perhaps she knew that once she gave it all, she would need to rely on the resources from the religious institution to provide for her. To care for the orphan and the widow, that kind of “pure religion,” as James would call it (cf. Mark 1:27) would hopefully touch the minds and hearts of her neighbors in her village when she was in her time of greatest need. And, perhaps Jesus knew that some of the scribes in charge would not carry out their end of the bargain. Yet, he also knew that there were some scribes, like the one in 12:28-34, who agreed with Jesus about the ultimate commands to love. And, perhaps, Jesus knew that this poor widow would be okay.