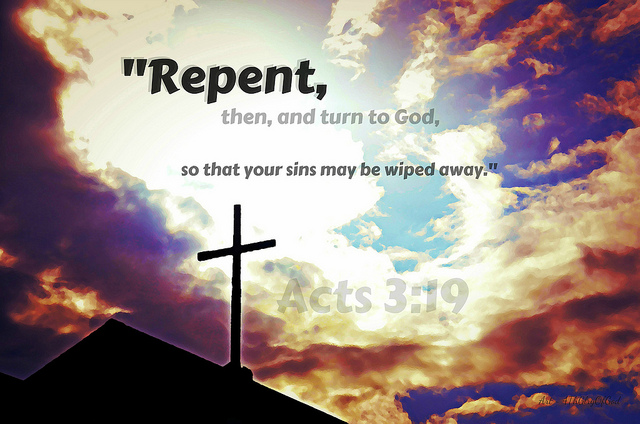 "Repent, then, and turn to God..." (Creative Commons Image by Sharon on Flickr)

A few years ago the Domino’s Pizza company faced a grim reality. Sales were falling off dramatically. While this once-successful company lived in denial, they accelerated on the fast track toward death.

Then somebody at Domino’s looked in the mirror. In an unusually candid bit of soul-searching, management saw what they had become: a company that made bad pizza. They had failed to listen to their customers who told them they weren’t buying their products anymore because their pizzas were bland and the crust tasted like cardboard.

In short, they deserved their impending death.

Domino’s responded with an ad campaign that publicly said, “We’re sorry. We got off track. We didn’t listen to you. We did not give you the quality of pizza you deserved, and we paid the price.

“That won’t happen again. We’re going to do things differently. We’ve are changing everything so that we give you the best quality and best value around. Give us a second chance.”

The marketing world ridiculed Domino’s ad campaign. You don’t admit to your customers that you failed. But it worked so well it has been called “one of the greatest marketing successes of our time.”

Domino’s strategy, whether they realized it or not, was straight out of the biblical narrative. It worked because, as Christianity has shown, turnaround begins with recognition of a need to change, and with repentance.

I recently attended a conference in Milwaukee with the provocative title “CHANGE OR DIE.”

The conference addressed the reality that virtually all church denominations in the United States have been declining. We seem to be dying a slow death.

How do we respond to this? We wring our hands. We point fingers. We blame society. We blame all those morally lax people who get so wrapped up in their own lives that they can’t be bothered to do the right thing and come to church. We blame parents who didn’t teach their children right.

You know what that sounds like? Domino’s in the middle of their decline. Blame the customer, blame bad luck, blame society.

Is there any way for the church to turn things around the way Domino’s did, or is it doomed to slide into oblivion?

What if we had the guts to claim the biblical message the way Domino’s did? What if we blitzed the media with an ad campaign saying:

“We’re sorry we did a poor job of being the church. Because we were doing so much good work, we did not realize we were coasting on our status as an American institution. We tried to get by as a membership church that catered to the likes and dislikes of our members instead of taking on our call to be disciples.

“We got into routines that produced duties and obligations instead of enthusiasm and fire. We got locked into tradition instead of mission. We tried to make worship trendy and cool to boost our attendance and lost our way in worship. We became a place of committees and Roberts Rules of Order and bickering about how things are done instead of a dynamic mission force the changes lives.

“We argued about doctrine and split hairs on procedure and rituals instead of shining the love of God in Christ Jesus into the dark. We did too much condemning of others instead of opening ourselves to the life-change power of the spirit.

“We are sorry. That’s not going to happen anymore. Come back. Give us a try and see what happens when the power of love drives a community so that you can find a place where you belong, where you make a difference, where life is more meaningful and fulfilling.”

What would happen if we took a chance and ran an ad campaign like that? I know what the critics would say, but they don’t understand the power of the world’s greatest turnaround specialist, Jesus Christ.

The question is, do we?