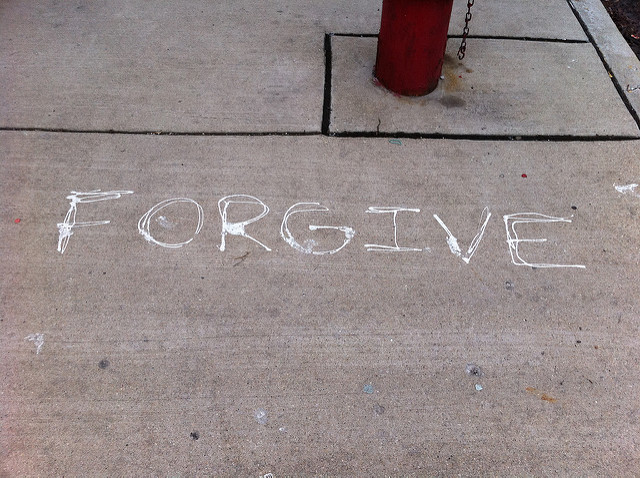 Two brief stories illustrate the difficulty of preaching about sin and forgiveness these days:

First, I had the honor of bringing communion to a wonderful, 96-year-old shut-in. After we conversed, I brought out my communion kit, which triggered an unusual request. “Fill that glass to the top, Pastor; I have a lot of sins that need forgiving.”

To this day, I have a hard time imagining how this sweet woman amassed this alleged pile of sins while physically limited, unable to leave her house, and with little contact with the outside world.

Second, I had the honor of officiating at a wedding for a young couple. When I asked which version of the Lord’s Prayer they preferred, the bride-to-be asked, “Which is the one that has the word “sins” in it?”

When I informed her that was the more contemporary version, she said, “Then let’s use the other one.” Like many young people, one of the things that most turned her off to the church was its obsession with sin. (I didn’t bother to mention that “trespasses” means roughly the same thing.)

People today just aren’t into sin the way people used to be. I say that as neither criticism nor praise — just an observation.

Martin Luther had no qualms about referring to himself as a poor, stinking bag of worms. I find that a little over the top, but that’s the mindset in which wonderful people like Gertrude were raised.

The attitude of many wonderful younger folks is, “Sure we makes mistakes and are not always proud of how we act, but we’re basically good people, so why obsess?” They have a point.

But one of the hardest things about being a pastor is you get a close-up look at human failure. We encounter so many people who are lost and hurting, jobless, living on the streets, addicted to chemicals, struggling with health issues, hungry, alienated from their families, lonely, angry at God, mad at the world, ashamed of themselves, depressed, etc.

There is so much pain in the world. Some of it people bring on themselves, some of it is brought on them.

Do you really think God who created a wonderful world for our benefit just smiles and says, “Hey, you’re doing the best you can, and I love you, so no problem. We’ll just have to make do the best we can with a messed up world.”

No, it’s not okay with God. God did not create the world so that we could screw it up. The reason the world is not the way God intends is because of the way people act. What we in the religious world call “sin.” Sin is not just committing crimes and doing bad things. Jesus made the definition of sin very simple: When he was asked, What is the greatest commandment?

Do this and you are doing what is best for yourself and for God’s creation.

When we fail to love God and our neighbors as ourselves, we are in a condition called sin. As we read in Romans, there’s no need to be pointing fingers and judging others; we all fail to keep that commandment in many ways. The question is what do we do about it when that happens? The church’s answer is “confession and forgiveness.”

The purpose of confession is not to weigh us down with guilt. Quite the contrary. A few years ago I received an anonymous letter from someone who had taken a very small decorative wooden piece from our altar area. This had been bothering her so much over the past 25 years that she was returning it.

What a waste! With just a small confession, forgiveness would have been hers and she could have been living those years completely free of this nagging guilt.

Then there was the time that I had a heated disagreement at a committee meeting with a member of the congregation with whom I had experienced some difficulties. I don’t think I was wrong, but I could have registered my opinion in a much kinder way.

Fortunately, the Spirit moved me to publicly apologize at the next council meeting. The apology was accepted, and ever since then the two of us had a good relationship. Confession and forgiveness are incredibly valuable in mending broken relationships, with each other and with God.

The fact is that no matter how “good” we are, we cannot clean up every problem we cause, by ourselves. All we can do is confess our failings before God and take a chance that God will find a way to make it right.

Confession involves taking a huge risk, especially with those we love. It’s possible we may not be forgiven. But the Gospel message is that we will be, and when that happens, we experience deep down how much God loves us.