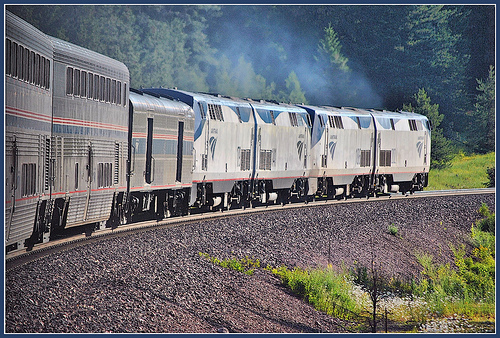 Amtrak attracts folks who enjoy the journey as much as the destination. The Empire Builder runs a century-old course from Chicago, through Wisconsin, Minnesota, North Dakota, and past Glacier National Park in Montana to Seattle and Portland.

A park ranger describes the glacial terrain and its natural history. Thirteen thousand years ago, the entire area was covered in ice. Catastrophic floods pushed boulders far past their origins into eastern Washington and down the Columbia Gorge to western Oregon.

In the 1850s an estimated 150 glaciers populated the mountains, most of them still present when the park was founded a century ago. But now, due to climate change, only 23 receding glaciers survive. The ranger says that by 2030 most of these will disappear. Glacier National Park will become a monument to what was lost.

But according to the U.S. Geological Survey, it is not only natural wonders that will disappear. Pine beetle infestations will spread, as will fires, depleting forests and those that thrive in them. Earlier seasonal melts mean a depleted water supply for humans, animals, and plants. Drinking water, in short supply in many places already hurt by climate change, will be scarcer in this region too. Insufficiently valued, such free gifts of the ecosystem will become priceless.

Changes abound in towns and countrysides as well. Sandpoint, Idaho, (population: 8,100) boasts a Transition Initiative to create “sustainable, resilient, vibrant community,” and the gusty plains of eastern Montana and North Dakota are sprouting windmills. If this is true in conservative Empire Builder states, it holds true across the country.

The month of St. Francis’s feast day is an excellent time to increase congregational awareness of human impact on the natural world and its impact on us.

Lamentations 1:1-6 (Oct 6) describes the destroyed city of Jerusalem, where princes have become like stags finding no pasture.

Jeremiah 29:1, 4-7 (Oct 13) presents a letter from Jeremiah to the exiles in Babylon, advising them to “build houses and live in them; plant gardens and eat what they produce.”

The complementary readings are more ecologically subtle, but these stand out:

Sirach 35:12-17 (Oct 27) characterizes God as an impartial judge who hears the prayers of widows and orphans.

The Psalms keep the connections among God, humans, and the natural world firmly in view. While something can be found in all of them, these stand out:

Psalm 37:1-9 (Oct 6 alt.) depicts the wicked as perishable like grass, not to be feared nor envied.

Psalm 121 (Oct 20 alternative) calls God the maker of heaven and earth, and protection against the elements.

Psalm 65 (Oct 27), a beautiful description of God’s provision, presents God as the “hope of all the ends of the earth,” who establishes mountains, waters the earth, and provides grain, causing pastures to overflow with flocks and vegetation.

The readings from 2 Timothy and Luke commend perseverant faith, qualities necessary for any courageous initiative, including environmental advocacy:

2 Timothy 1:1-14 (Oct 6) reminds Timothy to “rekindle the gift of God that is within you …for God did not give us a spirit of cowardice, but rather a spirit of power and of love and of self-discipline.”

2 Timothy 3:14-4:5 (Oct 20) exhorts, “proclaim the message; be persistent whether the time is favorable or unfavorable; convince, rebuke, and encourage, with the utmost patience.”

Luke 17:5-10 (Oct 6) reminds readers that faith need not be great — the size of a tiny seed, along with faithful service.