God’s Covenant with All Creatures 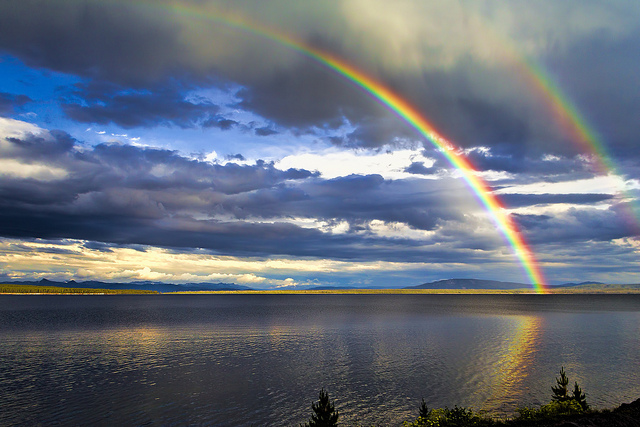 Sometimes a comfortably well-trodden path becomes a rut. When our interpretive wheels become stuck in it, we may misread important passages.

God’s speech to Noah and his offspring in Genesis 9:8-17 (February 22) indeed emphasizes twice God’s promise never again to destroy the earth with a flood. But readers often overlook who this promise pertains to. God proposes a covenant in verses 9-10 with Noah and his descendants — and not with them only, but with birds, domestic animals, wild animals, every living creature. This is repeated five more times:

Verse 12: the covenant is between God, humans and every living creature.

Verse 13: it is between God and the earth.

Verse 15: it is between God, humans, and every living creature of all flesh.

Verse 16: it is between God and every living creature of all flesh that is on the earth.

Verse 17: it is between God and all flesh on the earth.

In these ten verses, the earth’s living creatures are remembered not once or twice, but six times. In not one single syllable does God make the covenant with humans only. Rather, “all creatures” (kol nefesh) is repeated four times, and “all flesh” (kol basar) is repeated five times. When an attachment this strong is suggested between God and all life, preachers should pay attention. Especially in view of the many warnings in this month’s lectionary against misinterpretation.

During the past five centuries, western Christians have held Genesis 1:26-28, with its image of “dominion,” as the key to humans’ place on earth. Elevating this idea has allowed us to rip the earth’s crust to shreds, fell its great forests, destroy species at an unprecedented rate, and leave behind a badly polluted atmosphere, watershed system, ocean, and land as the price of doing business. “Dominion” has not served God’s earth well. Destroying our own abode does not serve us well either.

But God’s pledge to Noah, his descendants, and all life is one of care and healing. If God makes a three-way covenant like this, then we must likewise be covenant partners with both God and the rest of creation. Why then do churches continue to treat the earth as if it didn’t matter? If pastors aren’t leading the way back, we aren’t doing our job.

Other passages this month offer an image we need very badly: Healing. Psalm 147 (February 8) places God’s healing and cosmic rule in one breath: God “heals the brokenhearted, and binds up their wounds. God determines the number of stars, giving to all of them their names” (vv. 3-4). Close ties between the health of earth’s elements and that of its creatures are reiterated as God “covers the heavens with clouds, prepares rain for the earth, makes grass grow on the hills; gives to the animals their food, and to the young ravens when they cry” (vv. 8-9).

Mark’s Gospel begins with healing stories: first, a man with an unclean spirit is restored to health (Mark 1:21-28, February 1). Then Simon’s sick mother-in-law is healed (Mark 1:29-39, February 8). Then all healing breaks loose, as sick and spirit-possessed gather around Simon’s door for Jesus’ healing touch. If Transfiguration and Lent were not so early this year, Epiphany’s healing stories would continue with a leper, a paralytic, and another mass healing scene. Even sinners and tax collectors are called “the sick,” to whom Jesus comes as healer.

Are we healers? If God has pledged to preserve the earth, do we likewise pledge to stop destroying it, and instead to bring healing? How may we, in Jesus’ name, touch the earth’s body with healing?

Can we heal the forests, the earth’s lungs, that refresh and clean the air, that sequester carbon, that shelter, feed, and house the earth’s creatures, yet are being cut down at the rate of 150 acres every minute?

Can we, in Jesus’ name, heal the rivers, the earth’s circulatory system, that nourish aquatic life, transport nutrients, irrigate lands, and water animals and people, when 1.2 trillion gallons of untreated sewage, stormwater waste, and industrial pollution are dumped into the U.S.’s rivers every year?

What about healing the atmosphere, the earth’s skin, which protects us from deep space, conditions the temperature for our survival, provides oxygen, and circulates the rain, yet is fragile, proportionally only 1/20th the thickness of an apple’s skin?

Knowing that God has made the world, like living bodies, with extensive but not infinite capacity for self-healing, can we covenant to stop destroying, so it can mend? Do we, who boast of being made in God’s image, imitate our creator by helping the earth and its creatures heal?