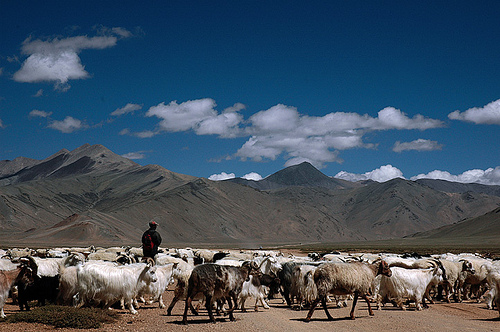 Shepherds in Ladakh(Creative Commons Image by Koshy Koshy on Flickr)

Few people thrive on conflict. Yet leadership can bring us face to face with it in unexpected moments. What motivates normal people to overcome fear when confronting potential controversy?

The sequence of passages from Acts leading from Easter to Pentecost narrates stories of individual and communal valor in the face of perilous opposition. Yet today’s churches often find themselves shrinking before conflict, taking refuge in acts of charity, but failing to take stands that can be perceived as political, failing to call leaders to lead and to call members to exercise citizenship.

As Anglican Martin Palmer has said, religious groups “own about 8% of the habitable land surface of the planet outright, and contribute to about 50% of schooling worldwide,” and claim about 85% of the world’s population among their adherents, and “are the third largest investment group in the world” and “produce more newspapers and magazines than the entire European Union.”1

These resources make religions extremely potent powerhouses for environmental change. Most importantly, it is religion that asks, and seeks to answer, questions of human values and purposes, that upholds ethical standards, and that calls the world to compassion. Religious groups have tremendous potential to influence their communities and even governments when it comes to reducing destructive environmental practices, especially when those practices create human injustices, such as unequal suffering from toxic waste or climate change related events.

But how do leaders find the necessary courage? Perhaps the stories in Acts offer some models, since a common thread among them is a sense of urgency and conviction great enough to overcome fear, as well as the presence of God’s Spirit strengthening human hearts:

The four readings from 1 Peter all reinforce disciples’ need for, and access to, courage:

While Acts and 1 Peter highlight courage, readings from Luke and John reinforce this theme by emphasizing Jesus’ continuing presence: