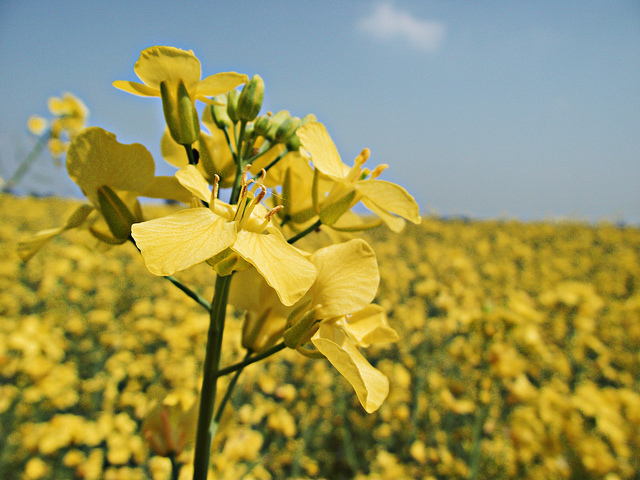 In a previous article, posted on this site last year while our normally alert editors nodded off, I proposed that the Second Evangelist may be the New Testament’s unsung comedian.

Exhibit A of my case was Mark 11:1-11, which in the other Gospels is Jesus’ triumphal entry to Jerusalem.  Mark sets up readers for such a tale before pulling the platitude out from under them.  I intended to try sneaking another essay in this vein onto WorkingPreacher.org before now, but I’ve been laughing too hard.

I write from New Jersey, known as the Garden State because it’s a great place to live if you’re a carrot, so Mark’s parable chapter (4:1-34) is an old favorite.  According to the NRSV, “As [the sower] sowed, some seed fell on the path” (v. 4).  I’m not sure that’s where it fell.  The Greek says para ten hodon, “beside the path,” which is just where you’d expect to stumble over rocks and thorns (verses 5, 7).  With such an easygoing, not to say idiotic, approach to agriculture, no wonder seventy-five percent of the sown seed went south (verses 3-7).  That makes the thirty-, sixty-, and hundredfold yield of the remaining twenty-five percent worth sitting up and noticing (verses 8-9).  Apparent carelessness and subsequent devastation are no indication of how God’s kingdom, where it takes root, blasts off (a fairly literal translation of another seed’s sprouting in verse 27).

We may hurriedly consider Mark 4:10-12, because its absurdity is so well known:  “For those outside everything comes in parables, so that, though they see, they may see and not perceive and, though they hear, they may hear and not understand, lest they turn around and be forgiven” (my translation).  Recognizing the origin of Jesus’ parabolic discourse in Isaiah (6:9-10), Matthew (13:13-15) tinkers Mark’s “so that” (4:12a) into “because.” Luke (8:10) simply jettisons the razor-edged predestination of “those outside” who “may not turn again and be forgiven” (Mark 4:12d).  If the First and Third Evangelists couldn’t take the Second straight, no chaser, no wonder most of my students can’t.  On the other hand, they have an advantage over Matthew and Luke: Princeton Seminary is swarming with Presbyterians.  When Calvinist knickers get twisted over Mark 4, you know you’re onto something.  Maybe it’s onto you.

The capper lies in Mark’s parable of the mustard seed (4:30-32).  If we recall the other Synoptics — for that matter, if we observe folktale logic — we know that the proper contrast between an inauspicious beginning and a stupendous outcome should be illustrated with “the smallest of all the seeds” (Matthew 13:32) and “a tree” (Dendron), even “a huge tree” (dendron mega, in some manuscripts of Luke 13:19).  Not in Mark.  There, the birds of heaven come to roost in the shade of big branches of the greatest of the … vegetables (lachanon, 4:32).  Christians with stained glass eyes may want their kingdom of God as a mighty oak.  The Second Evangelist hands them a head of lettuce.

Who can forget the plea of Loretta Young’s character to Richard the Lionhearted in the Turner Classic Movie, The Crusaders (1935): “You just gotta save Christianity, Richard!  You gotta!”  Too many of Mark’s commentators, scholars and pastors, have tried too hard to save Mark.  This Gospel doesn’t need saving.  It needs attention.  It’s one thing to stand beside the Twelve and be assured, “To you has been given the mystery of the kingdom of God” (4:11a).  It’s another thing to expect that Jesus will then disclose the kingdom’s mystery to us.

That’s not how things pay out in this Gospel’s economy.  What we’re promised is a mystery, and a mystery is just what we get.  So it is with the parables in chapter 4; it is equally true of the parable-spinner, Jesus himself, in all sixteen chapters.  If his disciples’ hearts have been hardened, if they are bat-blind and stone-deaf (8:17-18), by what right should we expect to come off as Andy Einstein?  A truculent atheist, Thomas Edison said, “Religion is all bunk”; but on one point Mark might have agreed with him: “We don’t know a millionth of one percent about anything.”

The more I study this Gospel, the stronger my conviction that its obscurities are not clumsy accidents but deliberate, perversely insightful, and probably premeditated.  Mark is unspooling good news that creates for us as readers what Jesus’ parables did for his listeners: confusion.  “For there is nothing hidden, except to be disclosed; nor is anything secret, except to come to light” (4:22).  If God has given us a genuine mystery, then we’ll never be able to figure it out ourselves.  God will have to reveal to us the secret that lies behind the curtain (15:38).  From God we’ll receive faith to discern that Jesus was never more the Messiah than when he died on a cross, whether his executioner realized the truth in what he said, or not (15:39).  Nothing succeeds like failure.  If you believe that, then who needs the kingdom dressed as a sequoia?  A zucchini does the job a lot better.