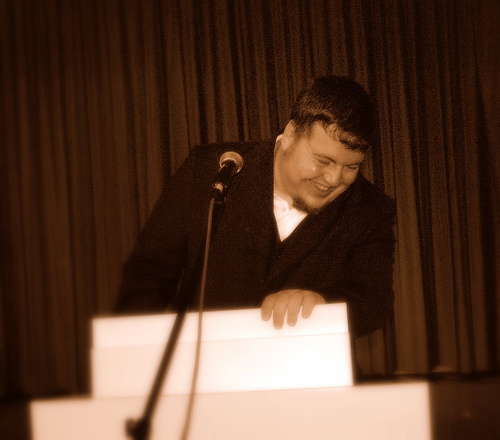 Almost everyone in the assembly was laughing. What was strange was that no one had told a well-timed joke; no one had uttered a witty pun; no one had made a keen observation pointing out the absurd, and, most importantly, no one was being snickered at for some kind of mistake or misstep. What elicited this eruption of laughter? The Scripture reading.

The reading had been Peter’s miraculous prison break in Acts 12 and the comical narrative featuring the church that follows. There had been nothing out of the ordinary about the manner in which the text was read.

It was read well, but this wasn’t a case of a biblical storyteller drawing a laugh through some gesture, facial expression, or pause. The reader was as surprised as anyone when the guffaw began. The truth is the assembly was laughing because the text was just that funny.

It shouldn’t come as news to preachers that the Bible has a pretty good sense of humor.

Michael Rogness writes, “The Bible is by its very nature inevitably humorous, because the message of the Bible is that humans do evil and foolish things, but God creates unexpected endings.”1 Between the foolishness and buffoonery of humanity, the penetrating observations of the prophets, and God’s own penchant for dramatic twists, there is undoubtedly humor peppered throughout the Bible.

If we can agree that the Bible can be downright funny at times, this begs an important question: What does the preacher do when Scripture tells a good joke? Encounters with the funny side of Scripture are times for careful discernment because such humor presents a preacher with both great opportunity and potential pitfalls.

I’ll begin with a few dangers. The maxim goes if you have to tell somebody why a joke is funny, it isn’t really funny in the first place. Nothing kills a joke faster than explaining it.

Although all human cultures have some form of humor, it is well known that not all forms of humor can be transferred from one culture to the next. It is unlikely that English-speaking North Americans will get a Hebrew pun. Here’s the hard part; they won’t find it funny if you explain it to them either. Don’t force it.

Perhaps even more dangerous is what happens when a congregation actually gets Scripture’s sense of humor. Once preachers hear laughter, it’s hard to squelch the desire to keep it rolling. I recently heard a seminary student comment how when the assembly isn’t laughing she’s not sure if they’re listening to the sermon. In traditions where verbal congregational feedback isn’t normative, it’s easy to use humor as a means of gauging active listening.

Here’s where it gets especially problematic. One of the greatest difficulties in preaching humorous biblical passages is the preacher’s ability — or inability — to let the text be the funniest comic in the chancel. If the biblical text is humorous in its own right, it is tempting to take this humor as license to turn the sermon into a standup routine. To do so risks having the jokes and quips of the preacher upstage the humor of the text.

Besides, some of us aren’t that funny anyway (this author included), and it isn’t necessarily an indictment against the preacher if the gospel reading garners more laughs than the preacher’s carefully crafted punch lines. After all, would you rather have the assembly remember how funny you are, or remember an encounter with Scripture?

Despite these cautions, the humor of Scripture offers great opportunity to the preacher.

Maybe a joke can’t be explained, but humor can be proclaimed. Although you can’t tell someone why a joke is funny, you can speak to the discovery and delight of humor when it hits its mark.

Biblical humor points us to our limits and foibles while simultaneously pointing to God before whom we always look a little ridiculous. Beyond the laugh itself, what does such humor tell us about God, about the human condition? What becomes clearer in those moments when, by no effort of our own, the Word of God brings laughter into our midst? Moreover, when Scripture is funny, the preacher has a head start. There is a good chance that the assembly will remember the sermon and even the text (provided that the preacher manages not to kill the spirit of the reading).

Such preaching is a delicate balance. Using humor in a sermon where humor is present makes sense. What is at stake here is congruity. Humor within narrative can be especially fun.

Invite assemblies to experience the humor — inside the laughable scenario. Open the hearers to see and experience themselves in relationship to whatever is funny. A good rule of thumb is that our words and quips should nurture the humor in the biblical text rather than supplant it.