Editing Your Sermon: Getting in Touch with Your Inner Homiletician, Part 1 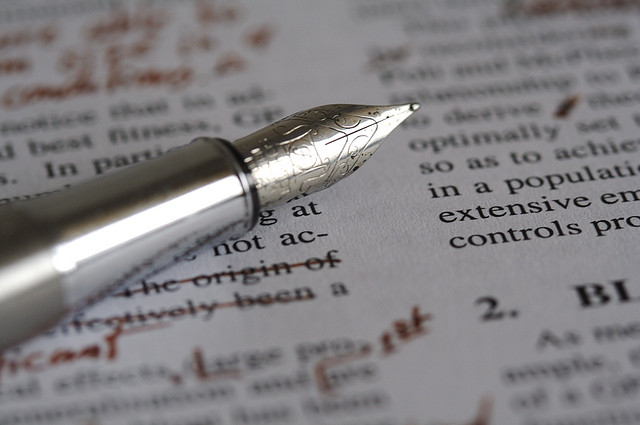 Editing a Paper(Creative Commons Image by Nic McPhee on Flickr)

“A professor once told a student that he had preached a wonderful sermon, except for what he said and how he said it.”1

Susan Bell, writer and editor, observes this about the writing class critique in her book, The Artful Edit: On the Practice of Editing Yourself: “Classroom critiques, while helpful, are limited. Too often they don’t give a systematic view of a writer’s work, and train him [or her] to develop a thick skin more than a sensible one.”2

Switch the nouns — homiletical labs for classroom critiques, preachers for writer — and you get the idea. In our preaching classes, maybe we got the thick skin but we were not sufficiently equipped with skills and knowledge to become our own common sense homiletician.

Bell believes many writers yearn for the wisdom and skill of an editor to help them see their own work critically. Ironically, however, the classroom often inadvertently teaches students to depend on others (specialists) to see their own work when what would be more helpful in the long haul is the common sense wisdom of an in-house editor.

I suspect a similar yearning exists among preachers, seasoned as well as those just starting out. The preaching life being what it is — often lonely, with very little formal reflection on our efforts, Sundays coming relentlessly — seems like a hit or miss affair. We’re doing alright, we say to ourselves, but we suspect we could be doing better, if only we could see our own work.

Maybe we decide to add one more thing to the growing list of things “we didn’t learn in seminary,” namely the skills of self-editing for the preacher.

Editing your own work

So how do we edit our own work? How do we get in touch with our inner homiletician?

Let’s take the last question first. The prospect of getting in touch with your inner homiletician may not be a very happy proposition. Typically, when I show up to church, I get the sense from the comments I am welcome but with ambivalence: “You don’t have a legal notepad with you today, do you?” Or simply, “Oh God, I think I’m going to be sick!”

Students say they watch me in chapel for certain telltale signs of whether the sermon “makes-the-grade” … or not. I’m not sure what they’re seeing, but I get the message: homileticians conjure as much dread as they do fond memories — maybe more the former than the latter.

Most homileticians (including this one!) would like to give their students more than a thick hide. And anxiety attacks about real or imagined deficiencies are definitely counter-productive. We would like to give students of preaching the ability to honor their work, the beauty of its incompleteness, with common sense editing skills that contribute to the betterment of their craft.

So getting in touch with your inner homiletician is in service of formation rather than assessment.

Crucially, becoming your own homiletician means gaining a more objective handle on your work. I liken it to getting the numbers on my cholesterol levels. I visit with my doctor about the numbers. He talks to me about other things in my life, “Do you smoke?” or “Are you exercising?” and so on. His clinical air opens me to life-style changes in a way that my feeling badly about the cheeseburger and fries I had for lunch does not. In a similar spirit, an almost clinical approach to our preaching can be helpful, alerting us to a problem or a potential, but doing so in a way that opens us to meaningful change.

Now for the first question, how do we edit our work? Maybe the most important thing is to forget the editor, at least initially. Why? Because preaching is less about product and more about process: it is the preacher engrossed in play, not worried by production requirements, who experiences moments of embryonic insight.

Psychoanalyst D. W. Winnicott writes of the paradox of play and seriousness: “A baby can be fed without love, but loveless or impersonal management cannot succeed in producing a new autonomous human child.” Task oriented, time dominated attempts to produce the sermon on a schedule (or to the requirements of a not-quite-absent homiletical ghost) are counterproductive. Our best creative productions call us to be “deliberate but without too much of the deliberateness of trying.”3

The implication: while we will attend to the sermon edit, what we aspire to is not so much a finished product as the formation of the preacher over time.

This is not a cul-de-sac but a pilgrimage.

Just as preaching intends congregational formation, so homiletical criticism intends the formation of the preacher. Second, the sermonic edit depends on the exercise of composition (which entails a manuscript) more than it does on a “finished” manuscript as such.

As for “finishing” the sermon, we are entrusted to the Spirit who quickens the faithful to hear God’s Word proclaimed — in spite of our best efforts.

This is the first article in a series.