The King of Second Chances 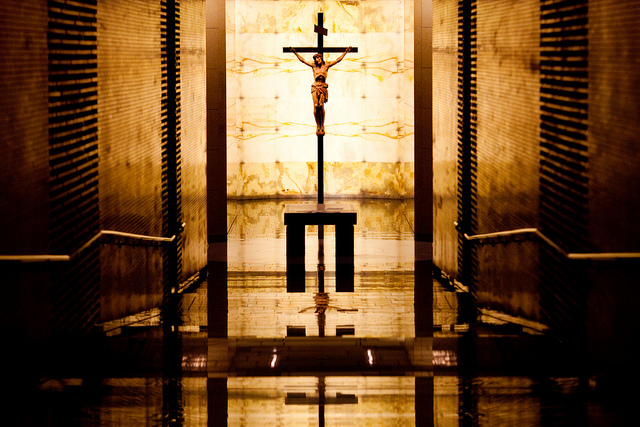 Do you ever wish you could have a second chance?

I thought of this as I read Luke’s depiction of the crucifixion and noticed just how many second chances there are here. The obvious one, of course, is that in this Gospel alone Jesus forgives those who crucify him — all those who crucify him, I gather, the active participants and passive bystanders alike. And then there’s the thief, who names his own sins and yet then asks to be remembered, to have a second chance, only to receive Jesus’ promises that he will join him in paradise.

But that’s not all. Earlier in the story Jesus predicted that Peter would deny him and told him he would have a second chance to return and strengthen the other disciples (Luke 22:31-32). And after Jesus is tried by both Pilate and Herod, they receive a second chance at their relationship, actually becoming friends (23:12). And, when you think of it that way, Barabbas is also given a second chance when he is released in Jesus’ stead (23:18-25). Later the crowds who have followed him, at times admiring him and at others jeering him, receive Jesus’ words of consolation and warning and are given another chance to perceive in him God’s consolation for the world (23:27-31). Later still, the centurion who put him to death will seize the second chance offered and declare Jesus innocent, and all the world will receive another chance to encounter God personally and directly as the curtain in the Temple separating the ordinary people from God’s most holy presence is torn in two (23:44-49).

I recognize that some of these instances stretch the sense of a second chance just a bit, but at the same time I also think this is one of the key themes of Jesus’ death and resurrection: not simply that we have a second and final chance but rather that we always have available to us another opportunity for life, grace, mercy, and forgiveness. Jesus’ death is according to the rule, order, and expectations of the world. There is nothing terribly unusual about it. People die unjustly all the time. But his resurrection invites us to see it both as ordinary — like our death in all respects — and simultaneously as extraordinary — unlike our death in that it ushers in a new realm and order altogether where death does not have the last word and where our mistakes and regrets no longer define us.

And this, I think, is the key to preaching Christ the King Sunday: to realize that Jesus is not coming to be just one more king (or ruler or president or whatever), but rather that he is ushering in an entirely new order — a world and order and reign and kingdom characterized by new life, hope, grace and above all love — the kind of love that never wearies in extending and receiving second chances.

We do not experience the fullness of this kingdom in this life, I know, and that is what makes all of this hard. But we do get glimpses of it — foretastes of the kingdom, as our hymns and liturgy sometimes remind us — each and every time we hear Jesus’ words of absolution and promise of paradise directed not only to the crowds of his day but also to us.

Which makes me wonder, Working Preacher, if perhaps on this day we might invite people to call to mind one of those things for which they long to have a second chance so that they might take seriously whatever regret or disappointment they harbor and then take just as seriously the second chance and new life Jesus offers us from the cross. Perhaps it’s enough for them just to call that regret or disappointment to mind. Or perhaps it would help to have something available that they could write on or receive some token by which to remember Jesus’ promise.

However you decide to do it, once folks have been invited to take stock of their hurt and Jesus’ offer of healing, our duty and delight is to declare to them that by royal fiat and divine command, Christ the King has granted to us a second chance and sent us from worship free to live into that new reality, repairing those relationships that need repair, amending our speech or actions, giving of what we have and are in joy, and living without the burden of regret we have carried for to long.

This One, you see, strung up by the Empire for treason and insurrection is, as it turns out, not merely challenging the orders of the world but overturning them altogether and establishing a new reign governed not by might, power and judgment but rather by love, mercy and grace. For he is the King, reigning from his unlikely throne, granting second chances to us all.

Thanks be to God — for the grace and courage to receive God’s gift of grace and for those who proclaim it, servants and heralds of the King.

P.S.: Thank you, Working Preacher, for your support of the site. We have exceeded the number of donations necessary to receive the challenge grant of $3,000 and now have a final opportunity to receive a dollar for dollar match of up to $5,000 as we work to make sure we can keep Working Preacher working for you. Thank you for your generous support and faithful proclamation!