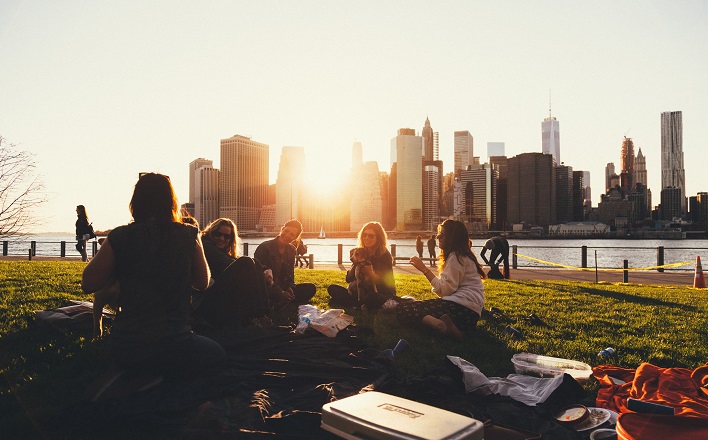 Photo by Ben Duchac on Unsplash; licensed under CC0.

Welcome back to the Gospel according to Mark, Working Preachers.

When the lectionary reinserts us into Mark’s rapid narrative at the end of Chapter 3, we’re quickly reminded that if Jesus’ main purpose in life was to make friends, he seems to have done a poor job. Mark, in particular, highlights the lines that distinguish insiders and outsiders, and those lines are usually difficult to perceive. They rarely fall where you expect them, leaving us to wonder why are these people inside the circle and those folks out?

The people who should be able to figure Jesus out—his kin and the religious insiders—simply can’t. Or they won’t. What’s worse is they exhibit little curiosity and even less willingness to dwell for a while in ambiguity. Abandoning imagination and opting for calculated answers, both groups take decisive steps to stem his popular influence and perhaps even to remove him from public life.1

The preacher’s family thinks he has lost his bearings ever since he trekked to hear John the Baptizer teach about repentance and spent forty days on a wilderness retreat. Now he’s gone too far and has made powerful enemies. He’s got to rein in the starry-eyed idealism, the pointed rhetoric, and the deviant behavior. What’s he doing promising people freedom from the power of evil? He should know what happens to prophetic leaders with large followings in this corner of the Roman world.

The religious referees attack from a different angle; they warn the community that he’s deceptive. What looks true about him is powered by falsehood. Unable to see deliverance for what it is, perhaps because they remain captive to certain criteria and authoritarian hierarchies, they demonize him.

Jesus’ replies to the twin attacks speak about a house divided, the need to dominate “the strong man” who runs the world, and blasphemy against the Holy Spirit. Each of those sayings deserves extended commentary on its own. He refutes those who seek to exploit polarization for their own benefit, the people who underestimate the power of evil in the world, and the cynical analysts who imply that the church’s struggles are the fault of its congregational leaders. But it’s Jesus’ final response that speaks most clearly to me about ministry in general and preaching in particular, right now at a time when many congregations are focused on returning and on envisioning the next chapter in their stories:

Looking at those who sat around him, he [Jesus] said, “Here are my mother and my brothers! Whoever does the will of God is my brother and sister and mother.”

If it’s one of those lines that makes dogmatic purists nervous, so be it. (Oh no! People will think that the spiritual life actually involves doing something!) At least it’s a relatively clear statement from Jesus; those are rare. We should note, too, the limitations of this verse: we don’t know exactly what anyone in this crowd has done, and so our understanding of what it means to do “the will of God” is sketchy.

But it appears to involve sitting.

The crowd that Jesus surveys is remarkable for being passive. For being patient. For being present. They’re simply in the house with him.

The Gospel according to Mark becomes a grenade in the hands of too many preachers who use its surprises and volatility to discomfort their congregations. Certainly there are times when Mark is supposed to unsettle us. In fact, this passage should do that for anyone who wants to control and define Jesus like his family and the religious scholars do. But Mark’s theological rhetoric also has a way of highlighting welcome and belonging. That’s a message most preachers I know need to hear, especially in light of the terrible season we have recently endured.

Remember that Jesus never walks away from his disciples, the ones who are so faithless and dull of spirit in Mark. Jesus does not quit when miracles do not come easy (8:22-26). He promises revelation (4:11a, 21-25). He even guarantees he’ll meet those who have fled from him after his resurrection (14:28; 16:7). All he asks is that people follow.

There is no heroism in Mark, except from Jesus himself. The way into kinship—belonging—with Jesus is sticking around. It’s to acknowledge that you’ve been caught up into a new reality—this transformational alternate reality called “the kingdom of God”—and to hold on for the ride. That’s probably not the entirety of what it means to do or to accomplish or to commit to “the will of God,” but it seems to be the biggest part, as far as Mark is concerned.

What happens after that, once a person commits to sticking around and letting Jesus be Jesus, is where the surprises really start to occur. Thank God we have preachers to stoke our imaginations for what God has in store.