John and the Two Sides of the Pulpit 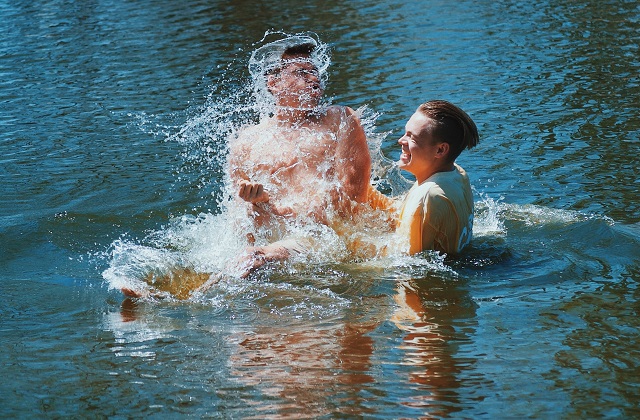 Photo by Joel Mott on Unsplash; licensed under CC0.

I wonder who baptized John.

He might have had to do it himself. But I hope someone helped. Even Jesus sought out another human being to baptize him. He didn’t go to John because he was shopping for a mentor or a spiritual superior. Jesus went to the Baptist because he was setting out on his own journey of living and preaching repentance—which refers to a radically transformed way of perceiving the world and comprehending God’s place in it.

And how can you preach about something you have never experienced yourself? Jesus presented himself for baptism “in water for repentance” (Matthew 3:11), so I assume at some point previously John had done the same. Otherwise, why would anyone listen to them? Yet the Gospels keep aspects of John’s ministry in the shadows; they never tell us exactly how he got started.

When I read about John and the vital role he plays in preparing us (and Jesus) to encounter God’s good and disorienting news, I wonder about how this Prophet in the Wild navigated his own call to ministry.

Whatever it was that prompted him to start calling his contemporaries to repentance, where did that experience lead him? What happened between the point where he got his ideas and the sermons he preached on the banks of the Jordan?

Where did John go to work out his own stuff? Did anyone help him? Nurture him? Challenge him? Correct him? Comfort him?

You see where I’m going here. Every sermon needs a messenger, and we messengers are disciples ourselves. We’re simultaneously guides and followers. That creates interesting dynamics when we think about how we are situated in relation to the messages we preach.

A sturdy pulpit can instill surprising courage for a preacher as a congregational leader. The word of God never moves in just one direction, though. Every pulpit is an altogether flimsy barrier between a preacher and the preached-to.

Several months ago I spent a weekend as a guest teacher and preacher in an out-of-town congregation. As I’m wont to do when I preach to strangers after spending several hours teaching them and facilitating their discussions, I left a chunk of my sermon unfinished so I could complete it on Saturday night in the hotel room. That allows me to preach something less canned and more responsive to what I’ve discerned about the congregational context.

Something happened that night, and I still can’t figure it out completely. It was a heavy week for me, and I felt very comfortable with this particular congregation. The short story is this: the next morning I hit a point in the sermon where I suddenly felt something. I was preaching my way through the manuscript when all at once I knew I was on the edge of choking up and maybe crying. Out loud.

In the moment, the intensity of the experience surprised me. Yet I also knew right away that I had to keep going or I would have wrecked this sermon. (Trust me on this.) So I took an extra beat at the end of the sentence, swallowed hard, bit my tongue harder, and managed to keep going. I don’t think anyone noticed the change in tempo but me.

Later on Sunday, hindsight helped me recognize that I had written a few paragraphs in the hotel room that were essentially a sermon to myself, confessing out loud the kind of authentic participation in Christian community that I longed for (and still do). My startled reaction in the pulpit was the point where I realized what it is I really want—and what I need.

I’ve held on to the pages with those handwritten paragraphs. They may look like a sermon to you, but to me on an ordinary summertime Sunday they were a cry for help and a refusal to give up hope. They still guide me.

As you know, Working Preachers, preaching is often lonely work. Isolating work. If it isn’t, then we’re probably playing it too safe. But that isolation should lead us to reflection, to interactions with peers and confidants, and eventually to growth.

Our best sermons are the ones we need to hear ourselves—the ones that put us on both sides of the pulpit at once. Personal conviction and honest vulnerability make the word of God tangible in our weary flesh and creaking bones.

Maybe John’s message of urgency, threat, fulfillment, and hope was so widely popular because he actually believed it himself. Maybe John wasn’t some scary, stern, wild-eyed, bug-eating, über-assured screamer down by the river as much as he was a preacher whose messages were true to his own adventure toward ongoing repentance—manifesting his own urgency, fear, confidence, and hope, as those experiences shaped his life.

I just hope he didn’t have to do something so risky alone.

Work together, preachers. That’s our best defense against cynical, predictable preaching. Especially during Advent, as we focus on God’s unfinished work, be good to one another. Call another preacher this week who you know could use a lift. We need each other, maybe now more than ever.