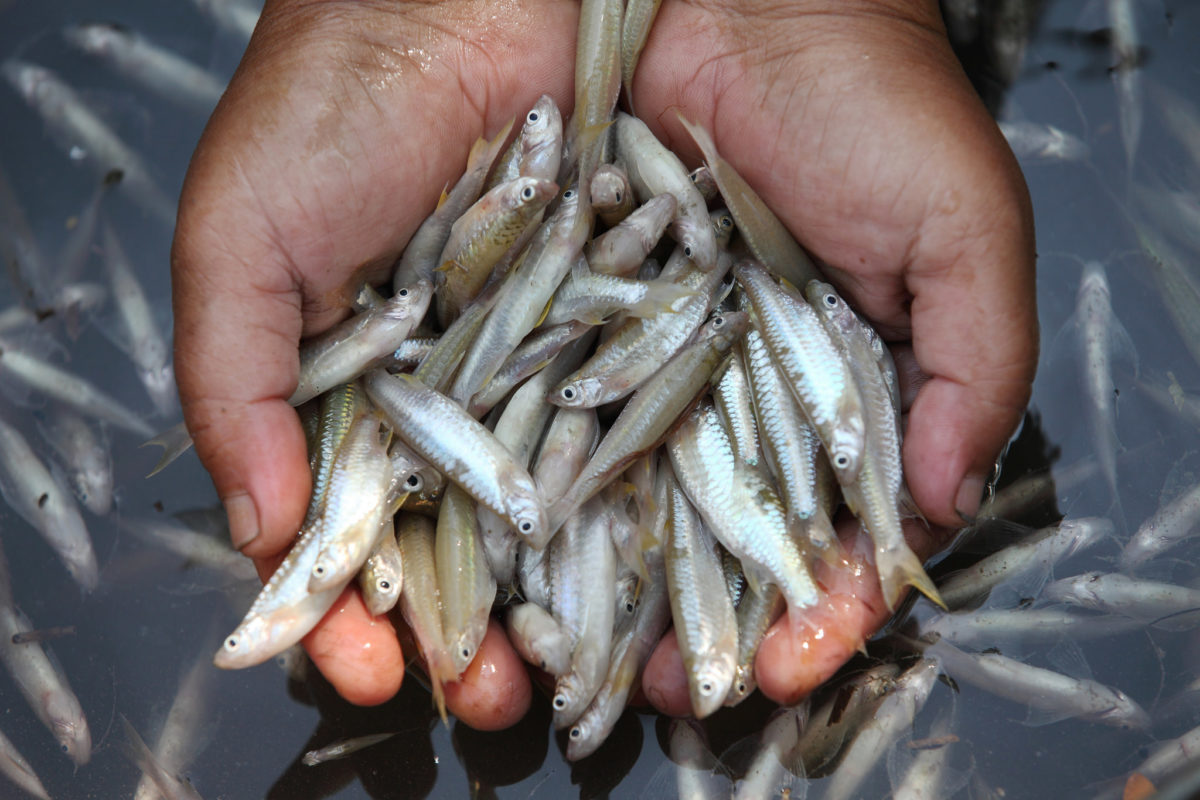 "Showing fish from her pond in Jessore, Bangladesh. Photo by M. Yousuf Tushar." Image from WorldFish via Flickr, licensed under CC BY-NC-ND 2.0

“Catching people” might not sit very well with a number of our congregants. Compared to the parallel accounts in Matthew and Mark where the phrase is, “fishing for people. Luke employs a different verb, “to catch,” to describe the primary activity of apostleship. As the commentary by Ron Allen on the Working Preacher website notes, the verb “to catch” implies a one-way action, and a violent one at that. This difficulty is important to name in a sermon.

This text is not permission to go around nabbing people here and there so as to save their sinful souls. Indeed, metaphors like this one have succeeded in forceful coercion and conversion; justification for forcing belief systems on the unsuspecting and insisting that those without a relationship with Jesus are most definitely not in the net of Jesus’ community. Furthermore, this story seems to perpetuate and exacerbate a dangerous ecclesial assumption — the larger the “catch” the greater the missionary, and subsequently, the church from which such missionary hails.

And lest we think such thoughts and expectations are only limited to assessing apostolicity, we should remember how readily we count up our “catch” in our churches, our membership numbers, how many on the rolls, how many in church on a given Sunday, as if numbers alone are the hallmark of successful church leadership and effective mission.

But that is exactly what we do. We tout abundance as our doing and not God’s. We locate confidence in our ministry in our own abilities to procure loyal believers. We insist that without our making, the catch of fish would be a merely meager and inexperienced fishing expedition.

Inflated figures, exaggerated amounts, extraordinary claims never backed up by any kind of evidence or experience seem to be the ticket to admiration when it comes to assessing ministry, as if Jesus had the pews filled at the foot of the cross.

Maybe, the promise of Jesus realized in the extraordinary catch of fish is not in what we can do, and even what our potential future might look like, but in what God can do. Maybe the amazing catch of fish is not to command what the apostles should do as loyal followers of Jesus but to witness to what God has done and will always do. We have ample evidence of God’s abundance made possible and visible in our actions toward bringing about the reign of God. And yet we are more often than not looking to give credit to our own capabilities instead of God’s faithfulness.

This past week, I tweeted the following quote: “Stop waiting for Friday, for someone to fall in love with, for life. Happiness is achieved when you stop waiting for it and make the most of the moment you are in now.” To be clear, I am not suggesting that “Catching People” is a new plaque-worthy, bumper-sticker-worthy, mantra-worthy saying. The promises of Scripture are not, and never have been, succinct enough to encapsulate in a quotable quote or summarize in an easily memorized sentence.

No, this quote is a reminder, and an important one indeed, at least for me, that so much of where we locate abundant life is what will yet be. A reminder of our ongoing inability to see the abundance around us. A reminder of our tendency to explain away abundance as too good to be true, excessive, and undeserved.

In our cynicism and skepticism and pessimism how quickly we lose sight of what’s truly good news and what isn’t. Easily swayed by those who insist on proof rather than faith. Those who take the Gospel for granted instead of relying on its grace.

And we tend to limit the “catch” to numbers alone instead of engaging a wider imagination around the individuals in the net.

I have greatly appreciated the insight of my colleague and co-host of Sermon Brainwave, Matt Skinner, who notes that the larger theological trajectory of Luke-Acts always explains the acts of the apostles as first and foremost acts of God. That when we look at the acts of the apostles, the miraculous, the abundant, the transformative, are all God’s doing. Every incident of conversion, every incident of belief in Jesus, is attributed to God — a hindsight is 20/20 theological perspective, by the apostles themselves.

We would do well to remember that the extraordinary catch of fish happens in Jesus’ presence. These newly minted apostles don’t haul in the net of fish on their own.