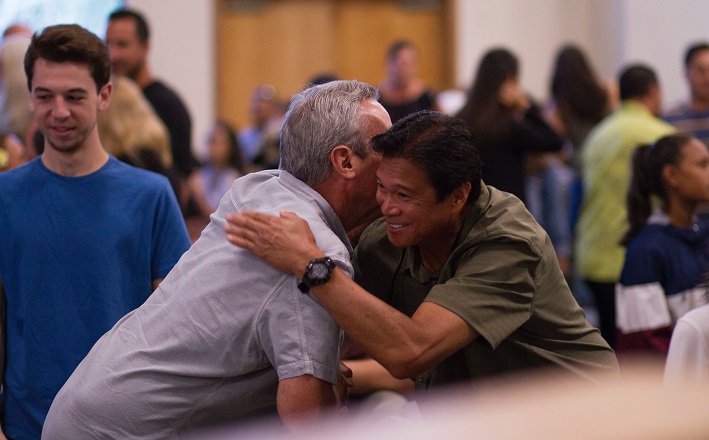 Photo by Erika Giraud on Unsplash; licensed under CC0.

In Luke 9, Samaritan villagers make it clear that Jerusalem-bound Jesus is unwelcome among them. James and John sense this is their moment to unleash some divine fury. Jesus’ calmer head prevails.

“Then they went on to another village.”

I assume there were mixed emotions as the group walked on, but Luke is silent on the details. Presumably the decision to deescalate and try someplace else is for everyone’s sake, not just to protect the unhospitable village but also to deliver James and John—the Sons of Thunder (Mark 3:17)—from their worst impulses.

But then the narrative delivers a jolt when Jesus tries to deter several would-be followers from obeying their much more humane instincts—a son eager to bury his father and a man who wants to say goodbye to his family. Who is Jesus protecting here? Now he’s the one who looks temperamental. His urgency and singular focus come across as cruelty. We might forgive these people if after encountering Jesus then they went on to another savior.

Working Preachers, can you relate to this passage and what it implies about being with Jesus? For one thing, pursue Christian ministry and strangers will denounce your vision! Also, coworkers will have terrible ideas and disguise them as piety, you won’t get much sleep, you’ll be underpaid, forget about pursuing hobbies, and your family will wonder why you aren’t around so much. But also, you have to journey with Jesus, a savior whose demands and criticisms sometimes border on unrealistic, too radical a break from what we think are the norms of decency.

My point is to remind us that biblical preaching requires us to contend with the Bible’s presentations of Jesus and his message in all their complexity and with all their fluctuations. All the congregants who hear this passage read on Sunday morning will sense that complexity. It’s your job to paint for them a portrait of Jesus, who rarely sits still in the studio we’ve constructed out of our theological assumptions and confessional rules. As a result, biblical descriptions of Christian faithfulness, identity, and calling often sound terrifying.

So it goes when a holy God wants to gets involved in everyday human affairs.

The preaching vocation comprises many parts; one of those parts is a teaching vocation. One thing we do in our sermons is help people gather around and interpret scripture with greater intelligence, energy, imagination, and love. Likewise, preaching includes a correcting vocation, in that we have to redirect a lot of mistaken presumptions that congregations (and ourselves) bring to the Bible and theology.

But sometimes preachers view their work as a protecting vocation, in that we preach as though people can’t handle the Bible’s weird, uncomfortable, ugly, or confusing parts. It’s when our narrative reads Then the preacher went on to another passage, where things would feel safer.

You shouldn’t try to protect people from the Bible’s depictions of Jesus.

Yes, I know that there are some terrible things said in the Bible and even more terrible things in the history of Christians’ use of the Bible. It’s not easy learning to negotiate the complexities. That’s not my focus today. Nor am I trying to claim that there’s something special about Luke 9:51-62 that you really need to preach. Instead, my admonition against being a protective preacher stems from the way this Lukan passage reminds me that we regularly encounter enigma and ambiguity when we read the Gospel’s portraits of Jesus. Each of us needs to examine our preaching habits from time to time to take care that we don’t develop homiletical patterns that entirely flatten those out or give people the impression that the Bible says things it doesn’t say.

As one reader has noted, “Jesus is both a fierce apocalyptic prophet who is preaching the death of the world … and a wise philosophical teacher who professes love for his neighbor and supplies advice for living.” That narrative tension is often perceived as a problem to solve or a conundrum to keep away from a congregation’s consciousness. But that same reader astutely recognizes that Jesus’ oscillation “between the comforting and the catastrophic” is characteristic of charismatic prophets, people whose very selves and teachings find ways “to reconcile a hard doctrine with a humane manner.”1

Don’t flatten him out, as James and John might have done, lest you flatten out your own preaching.

One reason why some preachers work so hard to proclaim Jesus as an anti-imperial agitator every Sunday is because there is so little New Testament material that points us in that direction.

One reason why some preachers talk incessantly about a clearly defined notion of family values is because there is so little New Testament material that promotes that vision.

Jesus operated on the fringes in so many ways. He confused different kinds of people. He’s still there, and he’s still doing it.

In a first-century society where there were a wide array of ways of being Jewish or even Samaritan (in terms of living out what it meant to live faithfully to the God of one’s ancestors), the Jesus of the Gospels comes across as remarkably unconcerned about identifying the one, singular, right way. Instead, he calls people to himself. He calls people to take on a new identity, one fully embodied in and defined by his very self.

And that, finally, takes us into the main aspect of the preaching vocation: it’s an incarnational vocation. When you preach, you’re not interpreting texts and creating community as much as you are, at the root, inviting people to experience Jesus, in all of his wild kindness and impertinence.

Fortunately, experiencing this charismatic prophet is about following imperfectly, and not understanding flawlessly.

That’s why our vocation is so dreadfully important. And difficult. And usually a source of great joy.

Working Preachers, this will be my final Dear Working Preacher column for several months. I have been granted a yearlong sabbatical from my ordinary work at Luther Seminary so I can research and write a commentary on the Acts of the Apostles, which is something I’ve yearned to do for many years. To keep my attention trained on that project, I am cutting back on other commitments. I’ll be back in this space just a little bit over the coming year, but I won’t be in the regular rotation. Happily, I’ll still be part of the Sermon Brainwave podcast every week. As always, I take inspiration from the hard, courageous, and faithful work you do in and out of pulpits. It’s an honor to be in partnership with you through this website and the connections we share in this peculiar vocation. May God bless your efforts and fuel your hope.