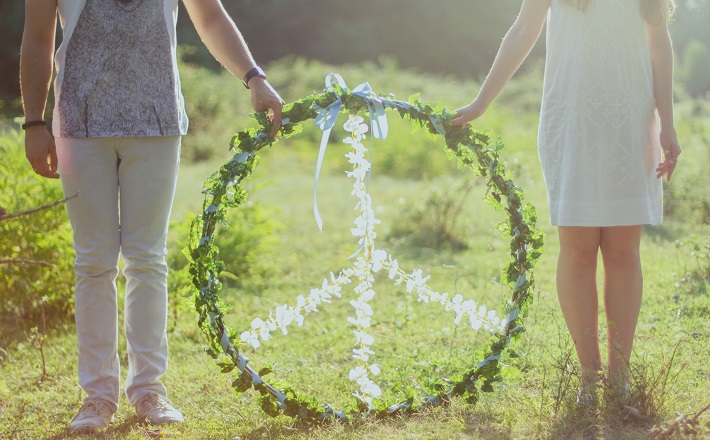 Full harmony seems so unlikely that the Psalmist has to turn to a series of similes in order to describe it. Both similes emphasize the abundance that accompanies unity. First, unity is like oil. It is not just any oil, but precious oil. The Hebrew word for “precious” is the same word translated as “good” in verse one. (This is also the word for “good” used repeatedly in Genesis 1.) Whether this is the oil used to anoint a high priest in a liturgical act or the oil ritually used on guests as a sign of hospitality, the point is abundance.

We are not talking here about the little dab of oil on the finger of the pastor making the sign of the cross on the forehead of the newly baptized. No, this anointing is extravagant. (I cannot help but recall the story of Mary and the costly nard in Mark 14). There is so much oil used that it runs down onto the beard of the anointed one, Aaron, whose beard ran down to the hem of his robe.2 That is a lot of oil. It is extravagant. Messy? Probably. So might unity be between divided peoples!

Oil is not the only thing running down. The second simile likens unity to the dew that runs down from Mt. Hermon in order to quench the thirsty land. Extravagantly, once again, the dew runs down from Mt. Hermon all the way to Zion. Impossible? Probably, since they are hundreds of miles apart. Even so, as Grogan states, the linking of Hermon and Zion means that, for Israel, “no limit was being set to the need for harmony.” 3

No limit suggests all have the potential to be considered “kindred.” There has been some disagreement over the reference to “kindred.” Is it literally (and only) blood siblings? Extended family? Is it those whom God has brought together? Is it those who profess belief in God? Ultimately, the psalm suggests there are no boundaries to “kindred.” The Psalmist proclaims the hopefulness of the harmonious living of the Northern Kingdom (Judah) and the Southern Kingdom (Israel); two lands turned into one people. Water has no bias and hosts anointing guests with oil before a meal (Luke 7:44-46) extends hospitality beyond borders.

Both liquids flowing in this Psalm (water and oil) spread beyond their points of origin. Living together in full harmony is good and pleasant because it is no longer scarce, it is limitless, it spreads beyond its point of origin. I began with listing a few prominent limits of harmony in the news today that inevitably are challenged by this Psalm. Preachers, can you think of others?

Not to be missed in this Psalm are both the liturgical elements and the movement. The oil itself signifies the liturgical act of anointing. This is underscored by mentioning Aaron, the high priest who resides in the temple of Jerusalem (Zion). The robes (plural), too, suggest liturgical vestments. These liturgical references are not surprising given that this is a song of ascent, which is a song that was sung by the people as they made their way to Jerusalem for a festival. And yet, this Psalm is not simply about one group of people making their pilgrimage to Zion in order to celebrate their union there.

The movement outward, the abundant and extravagant movement outward, is not to be missed. Good and pleasant things do not simply flow within neat boundaries. Unity is “on the move.” First, as mentioned, this is a song of ascent depicting people on the move. (It is curious that a song about going up has such a downward movement.) Second, the oil just keeps moving from the top of the head, to and through the beard down to the hem of the robe. Water making its trek from Hermon to Zion would have to be mighty voluminous. Even the words themselves highlight movement. “Running down” in verse 2 and “falling down” in verse 3 are from the same participle (yored). Yored appears three times in this short Psalm anticipating the blessing coming down from God.

Homiletically, there is no need to exhort (you must unite or else!). Instead, invite. Then again, perhaps this is simply a psalm of celebration when it is already happening. Preachers, point out those places in your community where harmony exists. This is Easter, a season in which the resurrection stirs us to celebrate even as it unites. Not even those who doubt (Thomas) are beyond the gushing of the oil and water.

You might also consider other similes you would use to describe the kind of unity to which the psalm refers. What are your images of “good” that describe the preciousness of unity where division prevails? We are an Easter people coming together on this second Sunday of Easter singing a reminder to all (even to ourselves) that living in unity has extravagant and abundant benefits far beyond measure. Even if we are not yet fully there, God willing, full harmony is a place toward which we are moving.