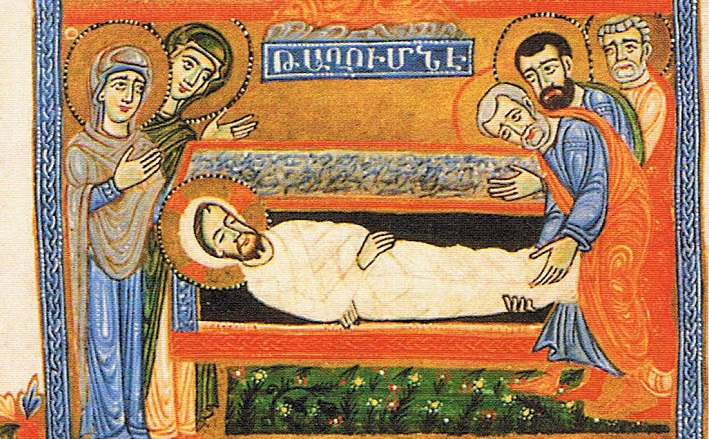 "Lamentation," detail from Armenian manuscript, from Art in the Christian Tradition, a project of the Vanderbilt Divinity Library, Nashville, Tenn. Original source.
March 25, 2016

Isaiah’s Servant Songs, of which this Good Friday text is the fourth and final, hold a particular place within the theology of the church. I do not mention this as a means of ranking texts one above or below another. Rather, I draw our attention to the place of these texts in the interpretation of the church because in and by these texts the early church understood who Jesus of Nazareth was and is. And, quite frankly, they remain guiding texts in how we continue to understand who Jesus of Nazareth was and is.

There are many well-known textual, historical, and interpretive challenges in and around the Servant Songs of Deutero-Isaiah.1 These are heuristically important, but not central to the preaching task for Good Friday. Perhaps the primary interpretive task when thinking about this particular text in relation to Good Friday is hanging out in this fourth Servant Song with the conviction that it is Christian Scripture.2

Such a conviction does not negate that it is also Jewish Scripture. Interpretation is not a zero sum game. Isaiah, like the rest of the Old Testament / Hebrew Bible, is inherited by both Judaism and Christianity.

That said, it is important to acknowledge and remember that we Christians have misused this (and many other!) texts in condemnation and persecution of Jews. At times during the history of the church, Good Friday has proved to be a particularly violent flashpoint for Christian persecution of Jews.3 It does the church no good to deny the anti-Jewish and even anti-Semitic misuse of Old Testament texts. It also does the church no good to condemn Isaiah for this misuse.4 In fact, turning directly into Isaiah may well be the route to take — preaching Christ and him crucified, normed by Isaiah as Christian scripture without moving towards anti-Judaism.

It is no wonder that early Christians heard the story of the crucifixion in the fourth Servant Song (Isaiah 52:13-53:12).

The parallels with the New Testament (NT) gospels’ stories of the crucifixion of Jesus are significant.5 Yet, rather than making this a matching game between Isaiah and the NT gospels, consider turning your homiletical gaze toward the theological claims that the Servant Song makes. If we as Christian interpreters allow that this Good Friday pericope “lives” within the horizon of God’s reconciliation of the cosmos to God’s self in the crucifixion of the incarnate Word, we have a place to start.

So, how does this text nudge us to think about the significance of the Servant’s suffering?

Repeatedly the song speaks of the Servant taking on griefs and sorrows (Isaiah 53:4), iniquities (53:6, 53:11), and sins (53:12), for the benefit of the hearer. As Luther says of Isaiah 53:4, “These words, OUR, US, FOR US, must be written in letters of gold.”6 The Servant is not suffering for the sake of suffering. The Servant’s suffering and death, which is also the judgment of God (53:10), is the revelation of God’s mercy. In our stead, Christ bore our sins.7

1 The interested are invited to explore Klaus Baltzer’s masterful survey of research and exegesis of the Servant, c.f. Deutero-Isaiah (Hermeneia; Minneapolis: Fortress, 2001) 19-24, passim.

2 Consider chewing on Brevard Child’s The Struggle to Understand Isaiah as Christian Scripture (Grand Rapids: Eerdmans, 2004), a survey of place of Isaiah in the history of the Church’s biblical interpretation.

3 Between the gospel readings which may include Matthew 27:25, wherein the crowd shouts, “His blood be on us and our children!” (RSV), and the Good Friday prayer calling for the conversion of the “perfidious Jews,” Christians were known to take the occasion to be an open door to violence against Jews. Cf. Heiko Oberman, The Roots of Anti-Semitism (James I. Porter, trans.; Philadelphia: Fortress, 1984) 28.

5 In addition to the 50+ references and allusions to Isaiah in Revelation, Sawyer’s visual of the prominence of Isaiah in the NT Gospels, Acts and Letters is striking, 26-28.

6 LW 17.221. Recall also the Nicene-Constantinopolitan Creed: For our sake he was crucified under Pontius Pilate.

Borne out of a gut-wrenching anguish, Psalm 22 is the cry of one who knows what it is to be bullied by his enemies, rejected by his community, and abandoned by God.

Hebrews has the most intricate Christology in the New Testament.
Print All Text Print All Commentary