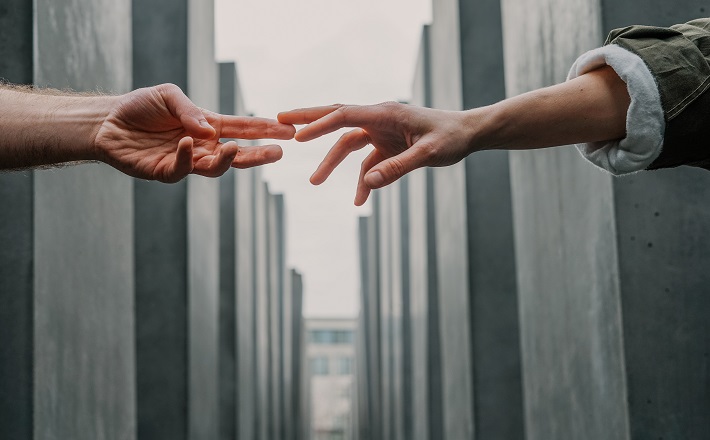 "If my kingdom were from this world, my followers would be fighting to keep me from being handed over." Photo by Toa Heftiba on Unsplash; licensed under CC0.
April 19, 2019

On Good Friday, as Christians meditate on the brutal suffering and death of Jesus, the poetry of Isaiah 53 offers poignant and puzzling reflections that illumine the character of God.

Isaiah 53 is one of four texts in the book of Isaiah that are often termed the “Servant Songs” (see also Isaiah 42:1-9; Isaiah 49:1-7; Isaiah 50:4-9). Throughout Second Isaiah, the references to the servant are shrouded in mystery. While scholars debate the place and function of these texts within the book, they have sparked rich reflection in the interpretative tradition.

The precise identity of this servant is unclear. The servant is named as God’s chosen one, in whom God delights and upon whom God’s spirit rests (Isaiah 42:1). The servant has been called by God before his birth on a mission to glorify God and restore Israel (49:1-5). Furthermore, the servant is a light to the nations through whom God’s salvation will reach the ends of the earth (Isaiah 49:6). For centuries, interpreters have debated the identity of this servant, whether Israel, a remnant of Israel, the prophet Isaiah, the Persian king Cyrus (see also Isaiah 45:1), or the crucified Jesus (Matthew 12:18-21; Luke 22:37). Yet the Servant Songs are inherently ambiguous about the identity of the servant, and the search for an irrefutable interpretation of the servant’s identity is not nearly the most interesting question about these texts.

Isaiah 53, like the other Servant Songs and the book of Isaiah as a whole, is poetry, and appreciation of its poetic form must be a central part of reading the text. With respect to the identity of the servant, for example, the poem resists a determinative identification of this figure. Rather, it calls upon the reader to meditate on the character of the servant and, by extension, the character of God.

The Hebrew text employs a series of wordplays across the poem that further highlight the servant’s paradoxical condition. His presence leaves the kings speechless, and they shut their mouths (52:15), while the servant does not open his own mouth (53:7). The servant bears the iniquity of the people, who are like sheep gone astray (53:6) while he is like the silent sheep led to slaughter (53:7). The people will see his marred appearance (52:13, from the root r-‘-h, “to see”) yet he will indeed live to see his offspring (53:10). Through such subtle language cues, the poem ties together these disparate images and underscores the surprising nature of this servant. He is marred, disfigured, even grotesque, and yet holds an inherent attraction and power such that the powerful are drawn to him and the culpable delivered by him.

The servant’s character reveals something of the surprising character of God, who is glorified by the wounded one and who allows the suffering of a single righteous servant to atone for the sins of many. The poem sparks a sense of reverent astonishment at this figure and this God, whose actions have implications for us. As the voice of the poem shifts from a singular first-person (“See, my servant shall prosper,” 52:13) to third-person description to first-person plural, it locates the actions of God and the servant as directly touching we who read: “he was wounded for our transgressions, crushed for our iniquities; upon him was the punishment that made us whole, and by his bruises we are healed” (53:5). The greatest power of this poem lies not in chasing the identity of the servant but in allowing the poetry to move us to humility and awe at the workings of God.

We should be clear that this text describes a figure in the past or in the near-term future; its mode of prophecy is not long-range prediction. Thus, the immediate referent of Isaiah 53 is not Jesus. Yet it is also clear that early Christians looked to this passage as a way to understand the surprising character of Jesus’ ministry and the God to whom his ministry bears witness.

Acts 8 recounts just such an exchange between Philip and the Ethiopian eunuch, who is reading Isaiah 53. The eunuch, like many interpreters before and after him, is struggling to understand the text. When Philip comes upon him, he asks if the eunuch understands what he is reading, to which he replies, “How can I unless I have someone to guide me?” He asks Philip if the servant refers to the prophet or to someone else. In response Philip began to speak, “and starting with this scripture, he proclaimed to him the good news about Jesus” (Acts 8:35).

There is an opportunity to exegete this text faithfully, mindful of the eunuch’s astute observation that readers — and the parishioners in every pew — will need a guide to understand it. As we have seen, the text is deliberately ambiguous, and this is part of its beauty. Yet starting with this text, which surely reveals to us an aspect of the character of God, we can proclaim the good, surprising, counterintuitive news about the God who suffered for our iniquities and was pierced for our transgressions.

It takes a certain amount of gumption to enter an unfamiliar space.