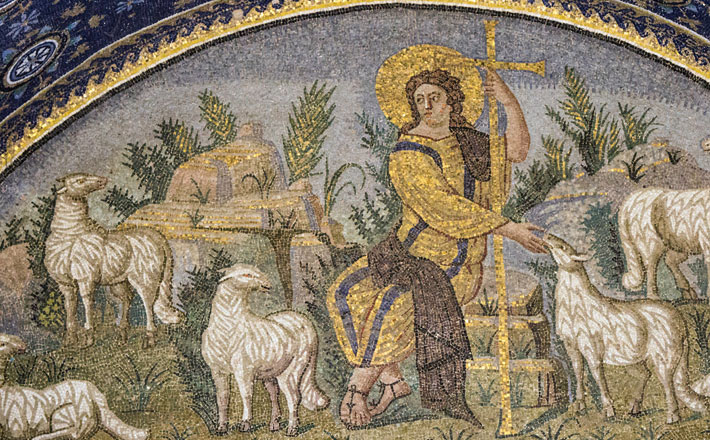 "Good Shepherd" 5th-century mosaic from the tomb of Galla Placidia in Ravenna. Image by Lawrence OP via Flickr; licensed under CC BY-NC-ND 2.0.
April 26, 2015

While it can have in memory (at least for me) a warm, gentle glow of safety and warmth about it, this discourse actually emerges out of a conflict with the religious authorities in John 9, and the conflict and related discourse are flanked by attempts to stone Jesus (John 8:59; 10:31).

John 10 begins in the middle of a quotation that has started at John 9:41. Jesus is continuing a conflict with the religious authorities, which they have started with the man born blind after Jesus has restored the man’s sight. When the authorities cast the man out, Jesus finds him and receives him as his own — his “sheep” in the rhetorical landscape of John 10. The man born blind receives not only physical sight but also spiritual insight, while Jesus tells the powerful opponents that in their insistence that they are able to see, they remain spiritually blind. He illustrates the conflict of John 9 in John 10 with the contrasting images of the true, good shepherd, on the one hand, and the thieves and bandits who oppose him on the other; the false shepherds, who do not enter the sheepfold by the gate but climb in by another way, do not have the best interests of the sheep at heart; they steal, kill, and destroy, while Jesus, who is metaphorically both the door to the sheepfold and the shepherd of the sheep, offers abundant life.

As our passage for this Sunday begins, we learn (and we hear it again and again in these verses) that the goodness of the true shepherd comes at a cost. While the hired hand, who does not care for the sheep because they are not his own, runs away when the wolves come, the shepherd does not. The good shepherd lays down his life. The phrase is repeated five times in these nine verses and suggests a division of the passage into three parts.

The first section distinguishes the good shepherd from the hired hands who run away when danger comes, leaving them in peril. The theme of the bad shepherds (the thieves and bandits of John 10:8) and the weak shepherds (the hired hands of vv. 12-13) is drawn, like the vine metaphor that we see next Sunday, from the imagery of Israel’s prophets; see, for example, Ezekiel 34. The true and best shepherd is, of course, the Lord of Psalm 23, another text for this Sunday; Jesus’ relationship to that great “I am” is evoked here by the “I am” statements of vv. 7, 9, 11, 14 and will be made explicit in John 10:30.

The thematic phrase of the passage is repeated in John 10:14 and begins what we might see as a second subsection. This one focuses on the identity of the sheep, which is based on mutuality of knowledge with the shepherd. He knows his own (and loves them, 13:1). And they know him (as in 10:4), as the man born blind, the hero of John 9, comes to know him and to testify to who he is.

The “other sheep” of John 10:16 leave the door open to the readers/hearers of the Gospel and also warn against any kind of exclusive claim on the door-shepherd Jesus. Deciding who is in and who is out is really, this suggests, not the business of the sheep and is a mystery to them. We sheep-folk are told only to cleave to Jesus, to love, and to testify, as Jesus makes explicit in later chapters of John and in upcoming lectionary texts.

The third subsection of the passage (John 10:17-18) draws the Father’s love into the image. The mutuality of knowledge between the Father and the Son has been mirrored in the relationship between the shepherd and the sheep. Now that relationship is further defined as one of love, which will be linked to commandment-keeping here in v. 18 as it will be again in the passages of the next two weeks. The Son is again, v. 17, said to lay down his life, but now he will also take it up again. The thematic phrase is here repeated three times in quick succession. He lays it down in order to take it up. He lays it down of his own accord. He has the authority to lay it down and the authority to take it up. All of this is framed by references to the Father’s love and the Father’s command, so that the death and resurrection are drawn into the mystery of the unity of the Father and the Son (which will inspire homicidal rage in Jesus’ opponents when he proclaims it in v. 30); the laying down and taking up of life on the part of the good shepherd are an expression not only of immense love and faithfulness toward the sheep but also of love and faithfulness toward the Father-God from whose loving presence he has come to the broken, dangerous, beloved world.

Jesus’ sheep are drawn into the unity of love and mutuality of knowledge between the Father and Son. They will, like the Son, choose to abide in love, as we will hear in the next two weeks of lectionary texts, and it will be that for which Jesus prays in the prayer of John 17, in the week after that. Then there is a suggestion in John 21:15-19 that the sheep within the story, like Peter, and the sheep of the future (we included) might later, in light of the Son’s laying down and taking up, function as better hired hands, the ones missing from the imagery of John 10. Nurtured by the love of the Father and Son, these later hired hands will tend and feed Jesus’ sheep and be able to face the worst the wolf can do (John 21:18-19) in the assurance that they have been drawn into a love that stretches from before time into a future beyond time in the abiding presence of the shepherd-God.

When it comes to modern preachers, “boldness” may not inherently be a virtue.

Many of us can only hear the first line of the Psalm in the King James Version (KJV): “The Lord is my shepherd, I shall not want.

“And this is his commandment, that we should believe in the name of his Son Jesus Christ and love one another, just as he has commanded us” (1 John 3:23).
Print All Text Print All Commentary

What’s So Good About A Shepherd?