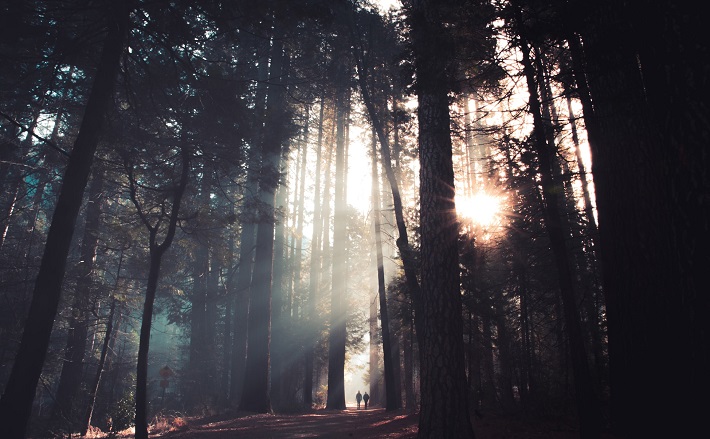 Indeed, the inscription above Jesus’ head reads “This is the King of the Jews.” But this was placed over his head as public irony, an act of public shaming for the entire Jewish people. Roman soldiers mock him; Jerusalem leaders ridicule him. This is no “king” in the traditional sense. How true that is!

The chapter begins with a series of trials, in which Jesus appears before Pilate, then Herod, and, finally, Pilate again. What the trials prove is Jesus’ innocence, a theme that is repeated (see Luke 23:4, 14-15, 22). Yet, the crowds and the Jerusalem leadership persist and, finally, Pilate “handed Jesus over as they wished” (23:25). Before arriving at the place called “The Skull,” one Simon of Cyrene is tapped to assist Jesus in the carrying of his crossbeam to the place of his crucifixion. The lectionary selection begins after this walk of shame.

As if a death among “criminals” was not sufficient, Luke describes the Jerusalem leaders “scoffing” at the so-called “Messiah” who was unable to save himself: what kind of messianic pretender could this be? Then, the narrative provides reactions from five groups:

The disagreement between the two criminals may be the most revealing segment of the story. It receives more narrative attention than the other reactions. In the other two synoptic Gospels, the two criminals each “revile” Jesus (see Mark 15:32; Matthew 27:44). Following the direction of the Jerusalem leaders in Luke’s account, only one criminal continues to ridicule Jesus wondering about Jesus’ messianic capabilities: “Save yourself and us!” (Luke 23:39). His request, of course, is as selfish as his life probably was: “don’t just save yourself; save also us.” The desire to turn the messianic identity into a useful resource for personal gain is as old as the biblical story itself. But Jesus says nothing to him in response.

The second criminal takes a different tack. Although his “rebuke” of his comrade may recall earlier scenes of violent exorcistic encounters (for example, Luke 4:35, 41; 9:42) in which Luke uses this verb, it may also be a simple practice of Luke 17:3: “If your brother or sister commits wrong, rebuke them; if they repent forgive them” (my translation). Unlike in Mark’s Gospel, Luke uses this intense verb in many instances of common human encounters (see Luke 9:21, 55; 18:15, 39; 19:39). Here, in Luke 23, the second unnamed man recognizes the distinction between their crimes and the one crucified in their midst: “this man has done nothing wrong” (23:41).

This prisoner’s announcement of Jesus’ innocence is unique to Luke’s Gospel. Here, in a more prominent way, Luke wishes to stress the crucifixion of innocent Jesus. Pilate “found in him no ground for the sentence of death” (Luke 23:22). Herod would agree with Pilate’s assessment (23:15). And, in our passage, the second criminal offers his own intuition on the situation: “this man has done nothing wrong” (23:41). When Jesus dies, the centurion’s confession sums up all the others in the chapter: “Certainly this man was innocent (23:47).

Finally, Luke explores the criminal’s one-on-one encounter with the innocent one, recognizing the true identity of Jesus as the messianic one: “remember me when you come into your kingdom” (Luke 23:42). If the words of verse 34 are not part of the original story—as many ancient manuscripts attest—then the ending comment is Jesus’ only spoken words in this entire (lectionary) passage, words that acknowledge Jesus’ real identity: “today, you will be with me in Paradise” (23:43).

Whatever else might be the meaning of the crucifixion in the first-century, crucifixion was a public performance in order to produce a public shaming. Even his clothes were, immediately, accounted for (via the casting of lots). With its inscription over Jesus’ head, Rome announces, “This is the King of the Jews.” The Jerusalem leaders would not be pleased with this part of the Roman-organized performance, since it was an embarrassment for all Jewish people. But crucifixion was Rome’s method of execution and this was their public show.

As the public drama continues in Luke’s version, Jesus is associated with “criminals,” but references to blood fail to appear (compare John 19:34). It was not about “blood” (or, gore) despite how the medieval church (and, some contemporary film producers) might have imagined the scene. Although Jesus received sufficient abuse throughout the trials, Luke concentrates his audience’s attention on the public shaming rather than the individual brutality he would have certainly received.

Perhaps, this is the best passage for Christ the King Sunday. It is a story of the crucified Christ. It is the story of how Rome treats defeated kings with public performances of humiliation. What they do not realize is that their action works into God’s story. Only those on the margin can testify to its truth. One of the criminals, rightfully condemned, recognizes his innocence and begs for mercy. One Roman centurion acknowledges the truth of what appears to be a loss as a victory. It is a story in which Jesus’ messianic identity is called into question. It is a story in which Christians throughout the ages call his identity into question. What kind of king will he be? Posing the question in this way is really another way of asking a more personal question: what kind of church should we be?

Might Jesus’ innocence (and, yet condemnation and death) speak to our contemporary situation in a new way? Does such a portrayal of unlawful condemnations speak to the American prison system that continually houses millions on lengthy sentences due to “crimes” of improper drug use?

The two criminals represent two “groups” of people, those who join the empire’s testimony against the innocent and those who identify with the innocent ones. Jesus, too, will identify with marginalized groups who are able to reflect critically on their situation in this American context and recognize the truth: “today you will be with me in Paradise.” Perhaps, this is the best passage for Christ the King Sunday.