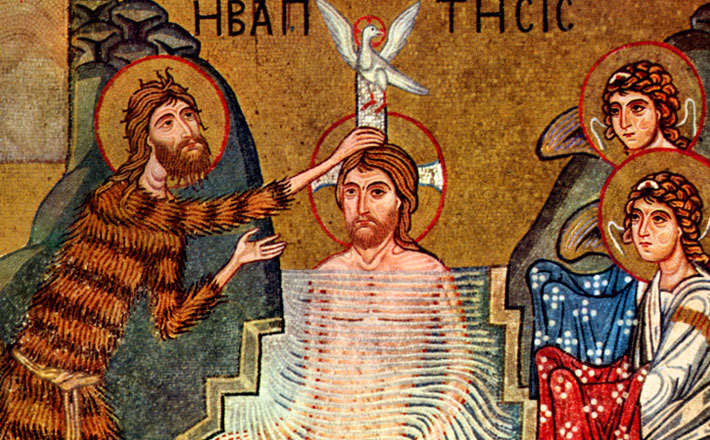 Baptism of Christ, Cappella Palatina, Palermo, Italy, from Art in the Christian Tradition, a project of the Vanderbilt Divinity Library, Nashville, Tenn.
January 10, 2021

Over this last year of uncertainty and anxiety, I have been binging feel-good videos unapologetically.

I particularly have been enjoying videos of elaborate wedding-engagements. Have you seen these? There is something about watching someone prepare for weeks and months for a certain day, hoping that it will be the start of a new, wonderful life, but not really knowing how things are going to go. I love watching folks prepare as well as they can, but then experience a momentous occasion in real time. That sense of hard work and preparation beforehand leading to the excitement, and nervousness, of asking another human being to commit to a different sort of relationship touches my heart every single time.

I see that twin notion of careful preparation and real-time excitement at plans unfolding in Genesis 1. For a myriad of reasons, I think “In the beginning God created …” is a misleading, unfortunate translation that obscures some of the romance and mystery of the first words of our Scripture. First, and this is a tiny bit technical, the first vowel of bereshit is a shva rather than a kamatz. That tells us two things: 1) there is no definite article “the” in the introductory phrase and 2) “beginning” is in construct with another word or phrase, e.g., “beginning of something.”

I usually argue for a translation that goes something like: “When God began to create the heavens and the earth ….” In other words, Genesis 1:1 is not speaking about the absolute beginning of all things, but a beginning of certain things. Accordingly, medieval Jewish commentators Rashi and Ibn Ezra both vociferously argued that creation ex nihilo is nowhere to be found in Genesis.1

We do not need to explain Hebrew grammar to know that God had clearly already been at work before the first words of Genesis 1, however. Even a cursory reading of the text reveals that Scripture does not describe how the ocean deep came to be, or how it is that there is some sort of spiritual atmosphere that blows about above the surface of the waves.

The earth is in a strange state of formless non- or pre-existence, but it still “is” somehow. These things are simply taken for granted as already existing in verse two. Genesis starts not with the creation of all matter, but with God making, transforming, moving, and separating what already exists so that all life will be possible. I get the sense that God has been readying the cosmos for some time before Genesis starts. Jewish lore tells of God practicing, experimenting with, and recycling 974 creations before settling upon one (ours!).2 I just love this image of God spending eons planning out everything before the first words of Scripture. Then Scripture opens with water, Spirit, formless earth, and a God who cannot wait to finally get started!

If this is an uncomfortable idea, remember that Jesus prepared and waited until “just the right time” to work salvation (Romans 5:6). We know from Jesus that God has prepared dwellings in God’s Kingdom from the founding of the world (Matthew 25:34). As we celebrate Jesus’ baptism this week, I think about all of the preparation of Jesus growing up, learning wisdom, and readying himself for his ministry. Stories mostly left out of Scripture, certainly in the Gospel according to Mark. God loves to prepare things in advance. Genesis 1 introduces this concept that will be carried throughout Scripture.

But after all that preparing, it was time to act decisively. Just as a lover finally stops planning and embarks on a new stage of relationship by using words to propose to a beloved, God used words to create a new relationship and new reality. God spoke light into existence. Then God immediately made a value judgment. The light, still unseparated from pre-existing darkness, was good. God did not make light become good. Rather God perceived that it was intrinsically good. God distinguished between light and darkness and then named both: Day and Night. Evening came first, and then morning. One day passed.

But why does any of this matter? I think Genesis 1:1-5 reveals something of God’s character and personality. There are ample reasons to think that God has been preparing for and looking forward to this exact moment of creation. God is excited to create life in all its varied forms. And when the moment comes, God notices that the first work of creation is good. When God perceived that the light was good, I have to think that God felt delight.

The good news is this: in the first verses of the Bible we are introduced to a God who has already been at work, creating things even before the story starts. And God continues to act in such a way that eventually plants, wild animals, and humans will come into being. It was not a foregone conclusion that God would like what God created, but God declared it good, and eventually very good. The God we serve plans and prepares good things. And the God we serve delights in creation. Most importantly, Genesis 1 reveals that God prepares and acts in ways that may never be fully revealed in order to cause things to happen at just the right time.

In this period of global uncertainty and anxiety that we continue to live through, wondering and fearing what may come next, seeing God’s thoughtful preparation and actions to ensure the thriving of life at the very beginning of Scripture is profoundly good news.

Director of Graduate Studies and Professor

The new bath has become the first sacrament.

Yahweh’s reign has concrete implications for life on earth.