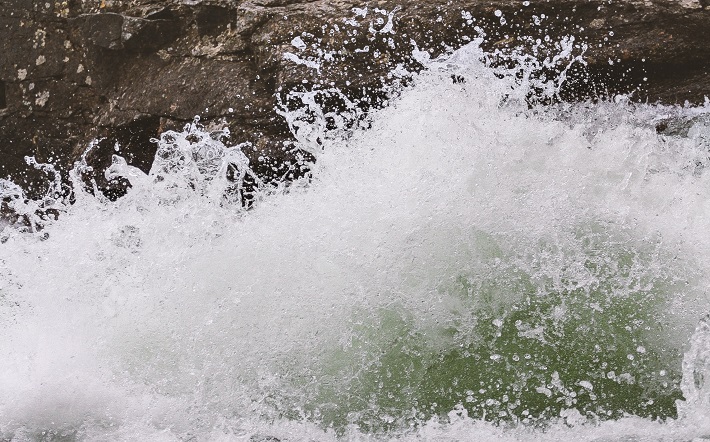 At the beginning of this new year, we are immersed in water.

That is true quite literally here in Minnesota, the land of 10,000 lakes, where snow blankets trees and fields and softens the edges of rooflines. But water also flows through our readings for this week, as we hear again the story of the Spirit of God who broods over the face of the waters at the beginning of creation and who descends on Jesus as he comes out of the waters of the Jordan.

The reading from Genesis 1 is perhaps too familiar to really hear. It can be translated something like this: “When God began to create the heavens and the earth, the earth was wild and waste, utter darkness covered the deep, and the Spirit of God brooded over the face of the waters.”1

This is a story not about creation-out-of-nothing but about creation out of a world that is wild and waste, formless and void (tohu va-vohu in Hebrew). In Genesis, the world as we know it is created out of formless matter and out of the watery abyss.

Now, to be sure, Genesis 1 does not inhabit the world of ancient Near Eastern creation myths, where the gods have to defeat chaos (in the form of the sea or sea dragon) in order to create the earth. There is only one God in Genesis, and that God creates everything, even the sea monsters themselves (Genesis 1:21). Nevertheless, there is in Genesis 1 “the deep” (tehom), the primordial ocean, which was to the ancient Israelites the epitome of chaos.

And one can understand why. The ancient Israelites are known for some great accomplishments, but sailors they were not. They preferred to remain with their feet firmly planted on land. And who can blame them? As a child of the landlocked Midwest, I too am fascinated and at the same time terrified by the ocean. It doesn’t help that I’m a poor swimmer, but even strong swimmers, I suspect, standing on the shore looking out over the vast, rolling sea, can understand why the ancient Israelites equated the ocean with chaos. It is not safe. It is far from safe.

But over these waters, says Genesis 1, broods the Spirit of God. The NRSV reads, “a wind from God swept over the face of the waters.” This is a fine translation, but “wind” and “spirit” are the same word in Hebrew (ruach), and the verb translated “swept” is used in Deuteronomy 32:11 to speak of a mother eagle hovering or brooding over her young ones.

The fourth-century church father Ephrem the Syrian picked up on this image of a brooding bird when he wrote of Genesis 1:2:

[The Holy Spirit] warmed the waters with a kind of vital warmth, even bringing them to a boil through intense heat in order to make them fertile. The action of a hen is similar. It sits on its eggs, making them fertile through the warmth of incubation.2

Ephrem’s image is startling—the Holy Spirit as a brooding hen—but it is compatible with the description of those same waters a few verses later:

Whales and walruses, sea monsters and squid—the waters teem with life and it is wild and varied and wonderfully free. These primordial waters (as we know not only from Scripture but also from evolutionary science) are the birthplace of life. And that life comes forth at the command of a God who creates it all out of sheer joy and delight. Annie Dillard is surely correct when she claims, “the creator loves pizzazz.”3

The Gospel reading, too, speaks of water and wildness. In Mark 1, we’re out in the wilderness of Judea with that wild and wooly prophet John; and after he baptizes Jesus, the heavens are not so much opened as torn apart while that same voice that says, “Let there be light” now declares, “You are my Son, the Beloved.”

And the Spirit who broods over the primordial waters is the same Spirit who descends on Jesus in the waters of the Jordan and names him “Beloved.” And then the Holy Spirit drives him out into the wild and wasteland (Mark 1:12), to begin his ministry of proclaiming the wildness of the kingdom of God come near.

Frederick Buechner writes that as a young man entering seminary, he was at a dinner party in New York and an older, wealthy, sophisticated woman spoke to him, a little too loudly, down the long table: “I hear you are entering the ministry,” she said, “Was it your own idea or were you poorly advised?”4

“Was it your own idea or were you poorly advised?” It is true, certainly, that the life of a minister (whether lay or ordained) is not what most people would call, “the good life.” It’s not making you wealthy. It involves long days, and sometimes phone calls in the wee hours. It involves rolling up your sleeves at times and doing dishes or arranging chairs because that’s what needs to be done. It involves being in places—nursing homes, hospitals—that many other people try to avoid.

And yet, there is also a certain adventure to this life of ministry, a certain wildness. You are often walking on holy ground, invited into the lives of your people at their worst moments and their best moments. And you are given the immense privilege and responsibility of interpreting how God is working in those moments, brooding over the wild waters, bringing forth new life.

We are immersed in water at the beginning of this new year. Water and wildness are our themes this week, but really, throughout our lives. And it starts in the waters of baptism. Water is a dangerous thing. Water can drown and destroy and wash away all that we cling to for security. Water, especially the water of baptism, is not safe. It is far from safe.

And yet, the God who calls forth life in all its many and varied forms from the primordial waters is the same God who calls us to new birth in the waters of baptism. Ephrem the Syrian, again:

Here, then, the Holy Spirit foreshadows the sacrament of holy baptism, prefiguring its arrival, so that the waters made fertile by the hovering of that same divine Spirit might give birth to the children of God.5

It is not safe. It is far from safe. But it is neither to a life of safety nor to a life of comfort that God calls us. The God who delights in the whale and the walrus, the sea lion and the squid, and all the wild and dangerous creatures in between, also delights in us. God calls us to new adventures in the waters of baptism. And in those waters, for the sake of Christ, God names us “Beloved.”

Thank you, dear Working Preacher, for answering Christ’s call to the adventure of ministry in this wild and beautiful world that God loves so much. May God give you joy in the journey.