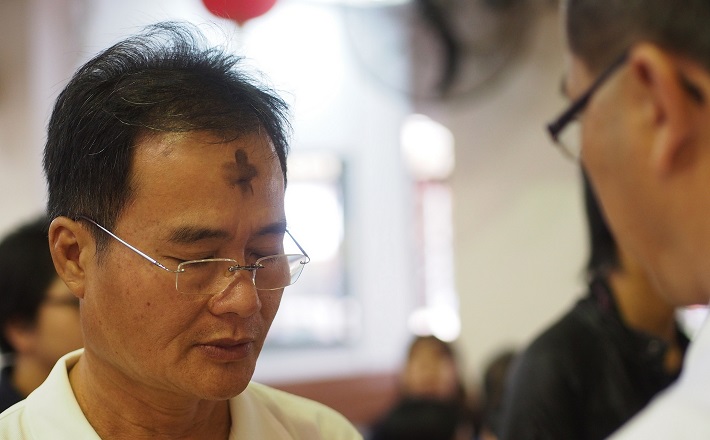 Lent is really a journey that takes all of us to a beautiful destination — resurrection morning — but before we can get there, we have to journey, and we have to journey with our sin, the sin that eventually caused Christ shame, torture, and death.

This particular leg of the journey is more like a restless night that is empty, lonely, and downright uncomfortable because we all know that “ … resurrection begins not with triumphantly toppled stones, empty tombs, and the masses agape in amazement, but before that. With death. With woundedness and mourning and betrayal, things done and undone, with understanding that dust and disaster and deceit are where we’ve landed.”1

Psalm 51 is a familiar picture of dust, disaster, and deceit at this point in the liturgical year. It falls in the typical category of a Psalmist voicing a lament or complaint to God. What is unusual about this Psalm, however, is that the complaint is lodged over and against the Psalmist’s own sinfulness — not someone else. Of the seven penitential Psalms (6, 32, 38, 51, 102, 130, 143), Psalms 38 and 51 are the only two that focus explicitly on confessing sin.2

A dramatic Psalm, names in the heading tell most readers familiar with biblical narratives all they need to know: David, Nathan, Bathsheba. Anyone who knows about the grouping of these three characters will add Uriah as a fourth actor and jump to conclusions that the sin behind Psalm 51’s confession was David’s murder and affair with Uriah’s wife, Bathsheba (1 Samuel 11-1 Kings 1). Although the heading itself may have been added at a later date, in the end the David and Bathsheba story is more about God’s grace and forgiveness and God’s willingness to offer second chances to David. Like the David and Bathsheba story, Psalm 51 is more about the grace of God than the failure of humanity, and this is good news to all of us who stand in a long line of sinners.

Psalm 51:1-17 can be dissected into four sections: verses 1-6 which address God’s character and human frailty, verses 7-12 which plead forgiveness and restoration, verses 13-15 which look expectantly toward reconciliation, and verses 16-17 which offer closing thoughts on sin, sacrifice, and repentance. In the opening, the psalmist immediately appeals to God whose character is steadfast love and abundant mercy (v.1), and admits to personal sin, transgression, iniquity, and evil (v.2-3). The sin the psalmist describes may be “willful rebellion,” “personal guilt,” or “injurious effects,” but its most significant characteristic is that the sin was not only against humanity but also against YHWH (v.4). Through the psalmist’s vulnerability, we are reminded that none of us can escape sin (v.5). It is not biological or hereditary, but we are born with its accompanying guilt. Yet, God desires that all of us be faithful, and any turn toward faithfulness — whether inward or outward — suggests that sin never gets the final word in God’s desires (v. 6).

Verses 7-12 include prayers for cleansing. “Purging” and “washing” may refer to ritual activity (v. 7), but they most likely imply that only by God’s work can the psalmist be transformed to hear joy and gladness that lead to rejoicing (v. 8). The centerpiece of the Psalm begins with verse 11, arguably the most often quoted portion of the Psalm. The verb “create” is a sparsely used verb in the Old Testament, and it is reserved for “the sovereign power God exercises in doing something impossible.”3 While “create” does not refer to the creation of the world, it does echo prayers where God’s transforming power was referenced with a situation where someone’s life depended on it (e.g.: Moses and Israel in Exodus 34) or where God’s creative work involved doing a new thing (e.g.: Isaiah 60-65). It is clear that the psalmist’s situation demands both (v. 11-12).

The suppliant begins to imagine life after restoration, and vows to change his personal ways. Here, “the reconciled will bear the message of reconciliation” (v. 13) no matter what penalty may be incurred as a result (v. 14).4 Furthermore, the transformation produced internally through contrition and forgiveness will produce an external response as the tongue, lips, and mouth voice the praise of YHWH (v. 15). Contrition and brokenness are both more important than ritual activity to YHWH, and the psalmist commits to make good and deliver as that which will be acceptable (vv. 16-17).

Preaching the Psalm on Ash Wednesday

It was Martin Luther who said of Psalm 51, “A knowledge of this psalm is necessary and useful in many ways. It contains instruction about the chief parts of our religion, about repentance, sin, grace, and justification, as well as about the worship we ought to render to God. These are divine and heavenly doctrines. Unless they are taught by the great Spirit, they cannot enter the heart of man.”5

The easy way for all of us to journey the next forty days would be to travel lightly without knowledge of this Psalm, ignoring and hiding the unpolished places of our lives. Thanks be to God that we aren’t allowed to do that. Not in Lent. This season teaches us that if we hide all of our imperfections, we cheapen the potential for personal and corporate renewal, restoration, and resurrection.

Is there good news to be found sitting and standing in the death, woundedness, mourning, and betrayal that comes with the dying of self on Ash Wednesday? It’s difficult to find, be sure, but Psalm 51 is one of those bold and courageous prayers that contains all the promise we need to begin the process of reconciliation, renewal, and restoration this season offers us.

Assistant Professor of Music and Worship