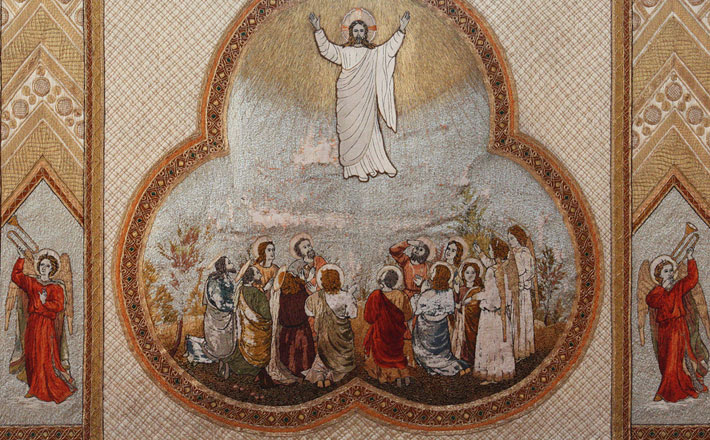 As I write this commentary, Ascension Day is still two months away, and bombs are falling in Ukraine. I pray for peace but doubt a ceasefire is near. I would be thankful to be wrong. Call it Lenten circumspection or pandemic wariness. Call it weariness of a world in perpetual turmoil or lack of faith.  By any name, Eastertide seems distant. Ascension seems more distant still.

But Jesus’ ascension in Acts is no text of glory. It is a text that stands with those in countries far from home, those whose witness has been costly, and those who do not see “convincing proofs” (verse 3) of resurrection. It is, in fact, a passage about a community of faith that relinquishes the “proof” of Christ’s risen body for the “promise” of a Spirit (verses 4-5) coming. One might question the wisdom of such a trade. I would welcome “convincing proofs” these days. Acts, however, is clear that proofs are not the point. Jesus’ body is neither physical evidence nor “phantasm.”1 Acts does not allow Jesus’ body to be conscripted by nationalism or commodified for gain. It is not dissected for its DNA. In its ascension, Jesus’ body resists human control. And in its place, his disciples are called to the work of waiting for a promise fulfilled. Promises require trust; they gain efficacy through relationship. And this is where Acts begins: in empty-handed dependence.

The promise the disciples are given is a promise of Spirit-generated power, but this is power of a very particular sort. “This power will have a purpose,” Matthew Skinner writes, “to make these ordinary people into Jesus’ witnesses across the Roman world.”2 Marvin McMickle’s memorable definition of a witness is striking in its simplicity and depth: a witness sees something, says something, and suffers something.3 The rest of Acts teases out the relation of the Spirit to each of these categories. Very little in Acts is as it seems. Men become blind to gain spiritual sight (9:8-9). Jailers are captives and prisoners free (Acts 16:27-30). Spirit-filled preachers are sometimes celebrated (2:41) and other times stoned (7:55-60). The power promised is not the power of persuasion—or even protection. It is the power of discernment and courage. It is a power that creates a new community and upends the expectations of a militarized, fearful world.

I read tonight of churches in Budapest standing vigil at train stations to welcome arriving refugees. In Warsaw, sanctuaries have been filled with mattresses to serve as shelters. In western Ukraine, pastors like Rev. Volodymyr Prokip are providing food and temporary shelter to those headed out of the country. “God is with those who are crying,” he says.4 Communities are being formed, not by bombs that fall from the sky, but by those praying in upper rooms and basement halls who witness to a different way.

That witness has a cost.

On the Sunday known as “Forgiveness Sunday,” Father Ioann Burdin, a Russian Orthodox priest, stood in Resurrection Church in Russia’s western Kostroma region and denounced the war that his country had begun. He was later arrested for “discrediting Russian armed forces.”5

Ascension Day is full of glorious theological truths. It is, in the words of Malcom Guites’s beautiful Ascension sonnet, when “earth became a part of Heaven’s story.”6 But Acts doesn’t yet know these wonders. Ascension Day, for Acts’s disciples, looks more like trust in the face of uncertainty. It looks more like prayerful commitment and costly witness. It looks a lot like today.

Much like we must wait to fully charge our devices, the disciples likewise had to wait to be clothed with power.