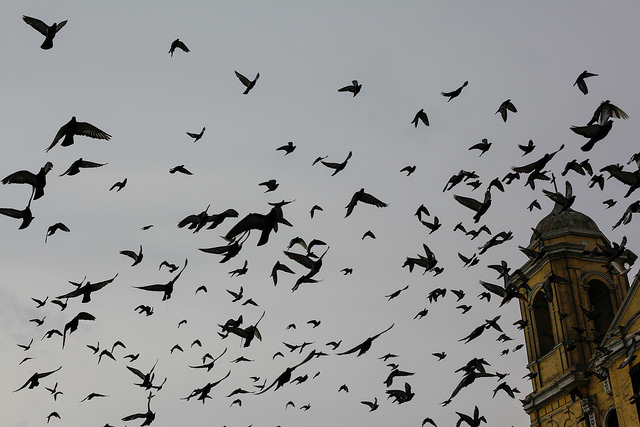 The Birds, Lima Downtownby Geraint Rowland, licensed under CC BY 2.0.

Preaching is little things carrying big things. It’s all about figuring out how to tell the story of Christ; this weighty promise on our transitory words. These days, preaching and prayer seem more difficult. Maybe it’s because the world seems so divided. It doesn’t matter how you turn the globe but it seems like there is big trouble everywhere: sectarian violence in the Middle East, the tensions between Russia and Ukraine, North Korea run by a little man in a bad suit with his hat trick to make his country’s people disappear, the drug and cartel wars in Central America, and children from Mexico who feel forced to flee across U.S. borders.

Even our own country with our divisions between liberal and conservative and Tea Party feels too big even for this Jesus we adore. Other generations have faced this, my mother once being a youthful witness to World War II, but the stakes seem higher these days with our moody and unstable climate heating up like a bar fight, too many having a hatred for the West and the passive-aggressive countries with their chemical, nuclear, and biological weapons. And this is a short list of my concerns.

Maybe that’s why Matthew’s gospel this year is so oddly comforting. The writer of Matthew was also dealing with overwhelming things like everyone around him being killed. It wasn’t so different from that scene in Gone With the Wind after Atlanta has been sacked where everyone is wrapped in bandages and missing limbs; the early Christian Jewish people were getting tortured and killed not only by the Roman government but also by their fellow Jews who believed they were betraying the faith.

God uses our flimsy, clumsy utterances and our preached words and prayers are lifted like birds forming shape in flight

Matthew’s audience was in the midst of divisions about as bad as they could be. They were facing warfare and death, such as crucifixion or having their guts eaten by pigs (look it up, but fair warning, it gets worse). Today if you tell someone you’re a disciple of Christ the only consequence is that no one wants to stand next to you in the line at the Post Office because you might be a cheery Christian chatterbox.

Our lives may not be at stake for our faith other people’s lives are. As I write this, Boko Haram militants in Nigeria have kidnapped another 60 women, girls, and young boys. And so although Matthew’s words seem foreign and hard and extreme to us, it only takes a small flight of compassion for us to imagine that his words are not that foreign to the rest of the world. We, and those in the chairs for worship, may want a year of comfort from Matthew, but we’re not going to get it.

And if our prayers of the community are honest, they won’t be sentimental chirps of mercy but rather tell the story of what it means to be a disciple in a big and fragile world. This means we might have to stretch ourselves as preachers, which means not preaching for individual comfort but preaching for a bigger hope. A bigger hope where we are not the headline players; rather others are.

I’m not a big fan of preaching politics from the pulpit. After all, grace reminds us that at least in the realm of the law, we might be wrong — although I’m pretty sure my politics are right in line with the will of God (wink). So, we speak cautiously and humbly for God. But we do know that Matthew’s Jesus, despite his weeping-and-gnashing-of-teeth discourses, has a big heart.

He likes those least-of-these folks, and bringing things like a cup of cold water to little ones and telling people he wants them to rest. After all, he is Jesus and he is one with the Father and even though the world is a muddled chaos he can tell us what he wants for us. In other words, there is another reality out there and even if we can’t see it in our world we can proclaim it because Jesus has given us a glimpse.

And it’s so odd. In the very preaching of this significant glimpse, this gospel, this word that strands all our pieties and dignities, something happens, it really does. We are gathered and drawn into a bigger hope. God uses our flimsy, clumsy utterances and our preached words and prayers are lifted like birds forming shape in flight, and the gulf that divides us from others narrows. The Holy Spirit binds us, homely disciples with eager yet ungainly prayers, and we are collected in the divine as our prayers are taken aloft. Soaring, ascending, silver and dark, there are no seams left to divide us.