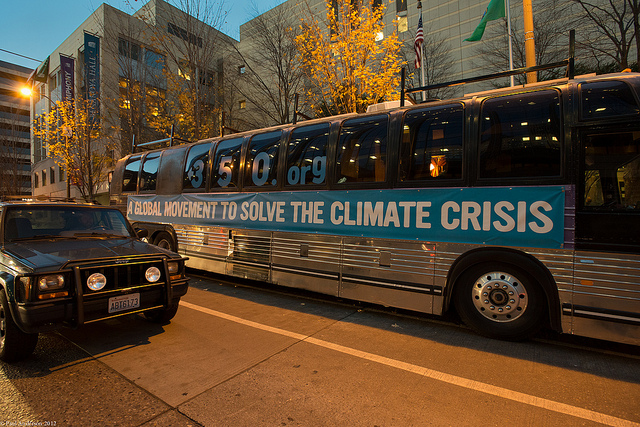 Bill McKibben and 350.org Do the Math in SeattleCreative Commons image by Paul Anderson (Posted by 350.org on flickr)

Environmental writer Bill McKibben has been working to bring climate change to the forefront of the U.S. agenda.

Immediately after Election Day 2012, he embarked on a 20-city “Do the Math” bus tour, raising support for renewable energy.  “Do the Math” refers to scientific evidence that raising the atmosphere’s carbon content beyond 350 ppm (parts per million) will result in increasingly extreme weather such we’ve already seen, culminating in an uninhabitable planet. Before the industrial era the number stood around 280 ppm. Today it is close to 400 ppm, melting polar ice, acidifying oceans, and changing storm and rainfall patterns.

McKibben and others hope President Obama will reject the extension of a pipeline proposed to run from the tar sands of western Canada, where energy-intensive methods are used to extract petroleum, and over the vast Ogallala Aquifer that underlies eight Great Plains states, risking contaminating the water supply for millions of people. This controversial Keystone Pipeline XL, climate scientists say, will mark “game over” for any hope to mitigate climate change.

At a “Forward on Climate” rally on the Washington Mall on a chilly Sunday in February, well over 40,000 U.S. and Canadian citizens listened as McKibben and other speakers described the present moment’s gravity. Lennox Yearwood, the energetic African-American preacher who has called climate change activism “the lunch counter moment of the twenty-first century,” compared this rally to the March on Washington led by Martin Luther King Jr. fifty years ago, noting that “while they were fighting for equality, we are fighting for existence.”

Before the rally, three friends and I visited the new King monument, and were inspired by words engraved first in hearts and now in stone: “The end we seek is a society at peace with itself, a society that can live with its conscience.” No one who remembers the civil rights era or knows its effects can think social change either impossible or insignificant.

This year April’s post-Easter Sundays lead up to Earth Day on April 22. Stories from the book of Acts describe fundamental, relatively rapid changes of belief and practice in the years after Jesus’ resurrection, as his disciples reinvented what it meant to follow Israel’s God, and who was included. These narratives of bold alterations in early Christianity’s course may offer precedent for today’s much-needed changes:

If we have ever wondered what we would have done as Peter or Paul, or as German Christians in the 1930s and 1940s, or in the Deep South during the 1960s, or if we have ever wondered if we too possess gumption to speak and act courageously, against the grain, upholding deeper convictions, this may indeed be our lunch counter moment.

The four weeks’ readings from Acts invite consideration that “the way we’ve always done it” doesn’t necessarily lead to a vital future, and that we might rethink the boundaries of our moral obligation — in this case, to our descendants, to those endangered by storm and drought, and to the earth’s nonhuman inhabitants.

The theme of shepherds and sheep prevails through many of the other readings, including one Psalm and most of the John and Revelation passages. As usual, the Psalms, especially 23 and 148, highlight creation themes:

The book of Revelation poses more challenges for ecological preaching, but some possibilities include these:

Finally, in the gospel of John: