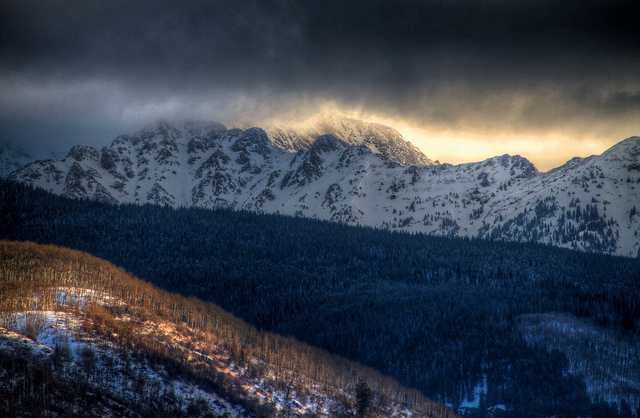 In the cold of earliest morning at Pendle Hill Quaker Center, I venture from my room to the Main House, where kitchen lights already shine welcome. The coffee tastes even better than it smells. Slipping back outside a few moments later, I see the trees more clearly, every winter twig outlined by the brightening sky. In this sunshine, the cold seems less bitter.

God’s cold has come — but in the northern hemisphere’s darkest days, it’s mostly light that shines throughout Scripture and lectionary, comforting those in gloom. Darkness flees into deepest shadow when radiance appears. Those of us living in cool zones benefit from the strange fact that Scripture, composed in a hotter climate, nevertheless loves light and warmth so much. God’s first act of creation on the Bible’s first page is light. Jesus’ presence in the world is imagined as light so bright that darkness cannot overcome it.

Even where light is not directly named, it pervades January’s lectionary. The returning exiles are radiant. Wisdom guides as a starry flame, and God’s voice flashes forth flames of fire. The mystery of God’s will is made known through insight. God’s eyes behold the psalmist’s unborn substance, woven in the earth’s depths. Nathaniel is told to “come and see,” but it is Jesus who sees right through him.

We know the need for dark and cold in the earth’s rhythms. Bulb plants need cold days before they bloom. Creatures need sleep before we wake, and darkness for comfortable slumber. Even nocturnal animals need the dark as cover for their activities. Yet it is the light that awakens and beckons us. It is the light by which we dress, the light through which we find renewal to plan our days.

The ancients long ago recognized the sun’s light and warmth as critical life forces. They used this visible knowledge to imagine God’s invisible power. But today, for people more cognizant of God than of the sun, we have to turn the metaphor back around. Scientists know now, though most of us forget, that the earth’s biosphere is an almost closed system. Apart from the occasional meteor, the only thing entering this system from outside is solar power. It is the source of all earthly energy, whether stored in living plants as food and cell tissue, or sequestered deep in the earth as fossil fuel, or acting in the present moment, moving winds, warming rocks, and enlivening animals.

The sun’s light was once the most convincing metaphor of God’s daily shining on us all. It is still, quite literally, the primary means by which God’s grace reaches us, lending sustenance and wellbeing. So in the cold, in winter darkness, we celebrate all the more the sun’s penetrating light, and encourage gratitude for its power every single day.