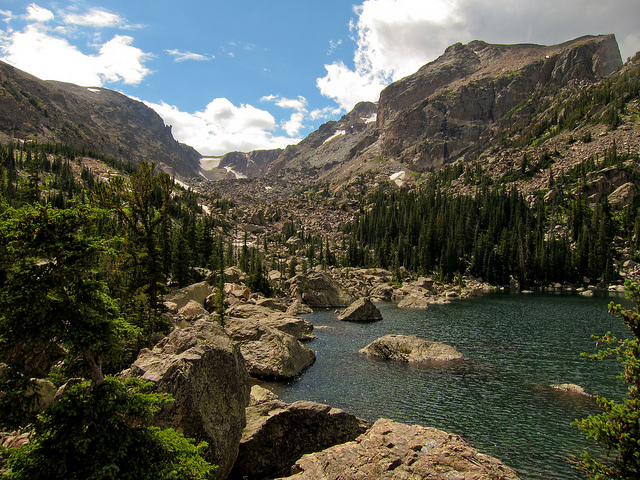 Editor’s Note: Each week in August WorkingPreacher.org will publish commentaries that correspond with the readings for Season of Creation 2014: Series A (The Spirit Series). A full listing of worship resources (including liturgies to accompany the readings) can be found online at http://seasonofcreation.com/worship-resources/readings/.

The wilderness — unknown, undeveloped, chaotic, threatening, often wondrous … and disappearing. Over the last two centuries, humanity has been on a campaign to dig up, dismantle, develop, and pave over most of the earth, so that, on one level, the wilderness seems to be receding. There are ever fewer places on earth untouched by humans.

Yet, as humans exert more and more “dominion” over more of the earth, we become ever more estranged from it. The habits that define our lives are detached from the habitat that supports us, and so the world seems less habitable. Bill McKibben proposes renaming the planet — “Eaarth” — because the planet we have known is now changing fundamentally.1 If on one scale wilderness is receding, on another it is creeping closer, ravaged and angry.

While we often associate wilderness with particular topographies — desert, mountain, outback, even forest or jungle — at a foundational level wilderness designates that which is not home. It is what we call realms that are unfamiliar, inhospitable, or threatening to us. This leaves open the possibility, however, that what to me is wilderness may be home to another.

In the Bible, wilderness is the space at the other end of the cosmic-geographical-theological spectrum from Eden, the temple, and the holy city. If the garden/temple is realm of earth where God dwells, the wilderness is the realm where the Creator’s work of ordering and making good has not yet come to completion.

It is noteworthy, then, that in biblical tradition God again and again calls God’s people to the wilderness to be formed and reformed. Exodus 13:17 suggests that when God called the people out of slavery, God did not lead them on the more direct route to the promised land (which might have led them into war with the Philistines), but through the wilderness, tested over a whole generation. So, too, when Jesus is baptized, he does not head for the nearest city to start his ministry. Instead the Spirit drives him out (Mark 1:12) into the wilderness to be tested as Israel had been. Testing is formation.

The four texts in this collection of readings represent distinctive perspectives on the experience of wilderness. Joel 1:8-10, 17-20 laments a world so devastated by plague (locusts), drought, and military conquest (cf. Joel 2:1-14) that there is nothing left for the priests to bring as offerings (1:9), and so no way to regain God’s favor.

The world has suddenly become a wilderness. At the end of this reading, the prophet announces that the day of the LORD is surely coming (1:20). But is this cause for fear or hope? Does the LORD come as savior or as judge (or both)? Not only has the basic fabric of life been shattered, but so, too, the people’s conviction of God’s character and intent.

Psalm 18:6-19 is a theophany that describes God’s deliverance of David from death and Sheol (Psalm 18:4-5), or, more prosaically, from his foes, especially Saul (cf. 2 Samuel 22). The Psalm mingles individual, communal, and cosmic referents interchangeably, as if the order of the whole world hangs on in the balance of David’s fate. God’s coming shakes the earth and causes mountains to tremble. God is present in smoke, cloud, fire, and darkness, and in lightning and thunder. In part, these images evoke a sense of primordial chaos, but even more clearly they recall God’s appearance on Mt. Sinai in the Exodus tradition.

God’s power crosses the boundaries between heaven (18:6, 9, 13 16), earth, and Sheol, here depicted as a raging, watery underworld (18:5, 15 “the channels of the sea”), which God exposes along with the “foundations of the world.” On the one hand, God’s coming creates a cosmic wilderness — uncontrollable, terrifying, and filled with darkness and smoke — yet God’s wild presence is also revelatory and, finally, the source of deliverance.

While Romans 8 does not mention wilderness explicitly, Paul’s assertion that both creation and humankind groan as they await redemption captures well the fundamental sense of wilderness as a place of struggle, alienation, suffering, and despair. Paul’s thought here presupposes the Genesis stories of the fall, which result in the foundational rupture of relationships between God, humankind, and the earth, casting not only humans but the rest of creation into a perpetual state of alienation and wilderness.

The most striking thing about the passage for modern readers is the clear sense that God intends the redemption not only of humans, but also of the whole creation. The redemption of each is tied inextricably to the other. Adam’s vocation was to serve and care for the garden (Genesis 2:5, 15). Can it be that the calling of the children of God (lit., “sons of God,” as Adam, Israel, and Jesus are each designated) is to reclaim this vocation, to serve God in turning the wilderness to garden?

In the Gospel lessons, the wilderness is again an ambivalent mix of threat and hope. It is, first, the location where John is baptizing. John’s ministry is an embodied challenge and alternative to the assumption that God and salvation are to be found in Jerusalem and the temple. Instead, God’s people must come out from the coercive commerce and false securities of the city and once again go into the wilderness to find redemption.

This is true even for Jesus, who, immediately after his baptism, is led (Matthew 4:1, cf. Mark 1:12 “driven”) by the Spirit into the wilderness to retake the tests Israel had struggled with on their long trek to the promised land and repeatedly thereafter. At Jesus’ baptism a door opens between heaven and earth. In the wilderness Jesus begins his conquest of the forces that have kept heaven and earth from being together as God intended.

Apparently God’s people cannot and should not avoid the wilderness. Whether geological, climatic, or spiritual, the wilderness is where God can be found most powerfully, as both judge and redeemer. It is where the reconciliation of earth and heaven begins.