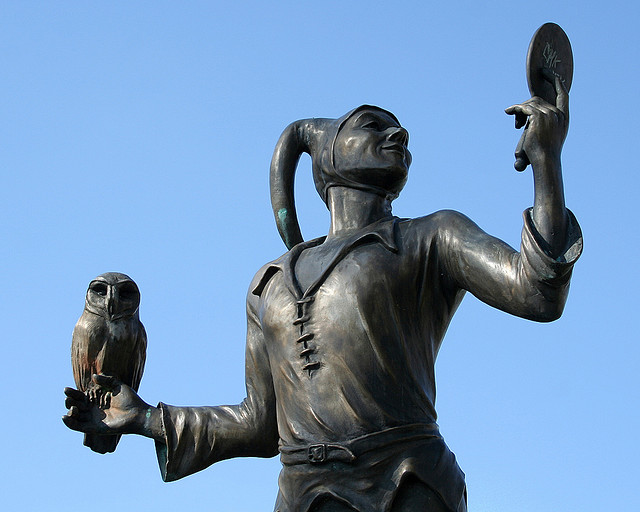 Till Eulenspiegel (Creative Commons image by M Kuhn on flickr)

Do you yearn to open up Scripture in a way that is both faithful to tradition and fresh in methodology?

Here’s one. But, pranks? Wise fool? As Hans Luther is said to have put it, “Was ist das?” What is this? We begin with literature.

Till Eulenspiegel is a fairly obscure, literary figure. People have heard of him — yet can’t quite rattle his story off the tops of their heads. Said to have been a real person born in early fourteenth century Saxony who traveled extensively throughout Europe before dying of the Black Plague in 1350, Eulenspiegel was known for his pranks and practical jokes which commented upon human arrogance and pridefulness. Often those made the butt of his jokes were people of high position in society, such as counts, clerics (!), university students, or simply those who laughed at him instead of with him.

Many of the many stories of Till’s foolishness involve his feigned misunderstanding of a common phrase, which leads to his triumph over a pompous antagonist. Though his interactions deal a painfully smart blow of come-uppance to those who, granted, so richly deserve it, Till acts without malice, if not innocently. He makes a wise point, using utter foolishness as his medium.

Believe it or not, Eulenspiegel is often my muse as I write sermons. That might be easier to understand if you knew that the name Eulenspiegel means literally “owl glass,” or “owl mirror.” Or, boiled down in true literary fashion, “wise reflection.” And Till’s merry pranks hold up a mirror to humanity and drolly reveal its foibles — just as the Law does to us, right before chasing us into the grace of God.

Indeed there’s something of an Eulenspiegel in Jesus of Nazareth. Not that Jesus went from town to town playing pranks on the self-important people of his day. No, wait. He did do that. Jesus left his scribal and pharisaical foils grumbling mad when, instead of falling into their traps, he deftly turned their loaded questions back on them. All so innocently and all so deliciously.

The disciples and the crowds, as well as the people Jesus encounters on his travels, also move the wise fool plot along by constantly missing the point of what Jesus is saying. That’s because he uses phrases and words in a new/old way. “You must be born from above” (How can I be born a second time?) Even the characters in his parables act Till-like. An unscrupulous, but shrewd, manager pads his forced retirement package and wins his master’s favor. The wicked tenants are destroyed after they kill the owner’s son, ironically, to get the inheritance he would have gladly given them.

And as for merry pranks? Well, what else would you call Jesus’ behavior with that figless fig tree? Or how about Jesus in the back of a storm-tossed fishing boat — sleeping (maybe with one eye open and chuckling)? Jesus writing in the sand as a blood-thirsty, self-righteous crowd surrounds an accused adulteress, and then drifts shamefully away. Yes, Jesus is a lot like old Till!

And so why not tap into Team Eulenspiegel from time to time when a text warrants it? And don’t worry for you more traditional sermon writers: the way to be a wise fool proclaiming the gospel corresponds to a rhetorical style called inductive reasoning. Or, as Jesus and his peers might have called it, arguing the lesser to the greater.

Inductive reasoning involves building a case from the bottom up. You cite several observed instances, then generalize them, and produce an all-encompassing assertion (Encarta). Or more simply put, you keep your eyes open and connect routine occurrences to a larger truth. Jesus uses this when he observes that the birds of the air and the flowers in the field do not work or worry about their next meal, yet God provides for them. Then comes the truth — if God cares for these creatures, how much more so does God care for us. Jesus holds up a mirror that reflects our lack of trust in God, by foolishly comparing us to sparrows and lilies.

Suppose you are working on a sermon focusing on the cross. Observation reveals two types of cross-bearers: ones who wear the cross as a fashion accessory and ones who bear the cross by living sacrificially. First make a few observations about the former with faux naïveté over-emphasizing its value to the argument. Counter that with some observed cross-bearing in your congregation, and a truth emerges from the comparison — the cross is a both a pattern for our lives as Christians, and a symbol of God’s sacrificial love for us. The wise fool strikes again!

That brings us to preaching pranks. Which could be defined as ways to distract the congregation while proclaiming the gospel. Some may call this “showboating,” but I would call it “meeting people where they are.” A preaching prank can be something as simple as an object referred to throughout the message. The more memorable the better. I once used sunglasses as a prop, calling them my gospel lenses. And I was surprised the next week by a shade-wearing choir seated behind me as I started the sermon!

A prank can be a break-away section of the sermon that illustrates by drama, or music, or multimedia. One Christmas Eve I projected a selection of humorous signs and then related them to the signs of the Messiah’s birth that the angels foretold to the shepherds.

Pranking is all about word play. For instance, approaching a text from a misunderstood aspect of it, or taking literally what is clearly metaphorical. Like agreeing with Peter that Jesus and he ought to stay on the mountain top, or saying that the rich put more into the temple coffers, so they must be more blessed than the poor who give only a little. Remember Gilda Radner on SNL with “Violins on TV”? Like that. Only, instead of “Never mind,” it’s “all who have ears — listen!”

You can go too far with pranks. So I advise testing your more outrageous ideas on your long-suffering spouse or teenager. My biggest goof was overestimating the yuck factor when I had one of our youth illustrate Jesus’ “come and see” by acting out the dinner table game “Looky” using mashed potatoes. (You don’t want to know.) People still remember the sermon though.

Clever wit and humor definitely had a place in the proclamation of the gospel for Jesus. And they belong in our modern-day sermon crafting toolboxes as well. But being a wise fool is more than getting laughs. It’s using language intelligently and memorably to reveal God’s grace — especially when that grace is less than apparent. And that’s what makes a sermon good.