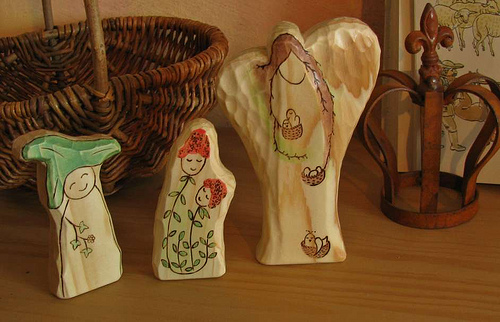 A worshipping community that has been singing the gorgeous Advent hymns for the last four weeks and holding back on the Christmas hymns will find its ears and hearts thrilled to soar at last in “Joy to the World” with the angels from the realms of glory announcing the birth in that little town of Bethlehem on a silent night.

Delayed gratification brings a special revelation: the people among whom we observe the weeks of Advent burst forth on December 24 with a particular tingle when the tunes are fresh and much anticipated.

Preaching with so much joy in the air, so much history, memory, anticipation, and the excitement of children is an immense challenge. It has to contend with yet-unopened gifts, the presence of those who come once or twice a year, Christmas cheer already imbibed, and even family tensions brought from home.

Christmas preaching, above all, invites theological wrestling because the point of this birth is simultaneously about past and the present: the birth into our world of God’s own self. The preacher’s problem is to say what Jesus’ birth means in a world that has heard the story and still not grasped the enormity of this divine embrace.

Christmas is not simply the time to celebrate that God sent a vision or a proclamation, but that God’s own self came into the material, the fabric, of creation. Creation is no longer a creature only of divine breath and word (“let there be…”), but because of God’s birth as human, the created world itself has become a means for knowing God.

In an essay on Christmas, Jennifer Hockenbery1 unearthed startling changes that Jesus’ birth brought upon human thinking and living. I offer here some of what we learn from Jesus’ birth with additional words about the imagery of the season and the pivotal day of Epiphany.

First, because of the Nativity, the ancient Greek notions of idea and matter residing in separate realms is broken open. Truth is no longer understood in the sense described in Plato’s Republic.2 Plato wrote that human life is lived as if in a cave where we are chained so that we do not see the source of light but only its shadow on the wall. Because of Christmas, Truth is no longer a shadow on the wall inside the cave. Instead, the light itself has come into our cave. Truth is not the idea behind the material image; the material itself is the truth. 3 This is not to foster the idea that material reality is God (what is called pantheism); rather, that in Christ, we see God.

Secondly, the ancient Chain of Being, depicting a hierarchy of created order with Truth on top and the material world on the bottom, has been up-ended by Christmas. The Infinite has come into the Finite. What is immeasurable, unfathomable, eternal, took on what is small and temporal. God became human. These familiar words, which may well make us marvel, can too easily become mundane. We benefit from focusing on the astonishing shift, the earthquake, that is the reality of incarnation. At Christmas we celebrate God’s having entered into our flesh and changed the way we live.

Thirdly, the incarnation honors flesh — specifically the body of woman, of Mary the Mother of Our Lord — thus overturning ancient prejudices against proximity to blood, birth, and death. Perhaps because human beings live in such awe of creation, we fence off what we don’t comprehend with laws regulating how far we must keep distance from it. Each age and nation has constructed its own barriers against the creative power.

Into that fear-driven reality, God was born of a woman. When God’s own Spirit honored Mary’s body, all women and the very life-blood was honored. “God announced to her that her womb was not dirty, that her blood was not sinful, that inside of her, in the place the priests and philosophers called the source of sin, God was going to live.”4 We are made to take stock of our prejudices. The incarnation calls human societies to make sure women (and all who are accorded less than adequate status) have rights equal to those regularly and normally given to men. Equal. Because Jesus is born. No higher authority can be found. Patriarchy is abolished.

However you schedule worship in these weeks, the Gospel readings repeat the images of a child, angels and shepherds, light, messengers of peace, the temple, and the guidance of a star. This tale which is in some ways made gentle by the presence of cattle, the story of two boys (Jesus and Samuel) increasing in wisdom, and sheep, is also undergirded by the stark and menacing conniving of a king and the poverty of a little family.

Why is Epiphany part of Christmas? All of the complexity of the Christmas story comes to a brilliant climax on the day of Epiphany when the identity of this child is clarified not only by a star but by the insidious clash of interests: the king wants him killed while the magi want to worship him. And who is this child? We live and move and have our being in the narrative concerning his birth given to us in this time of the church year.