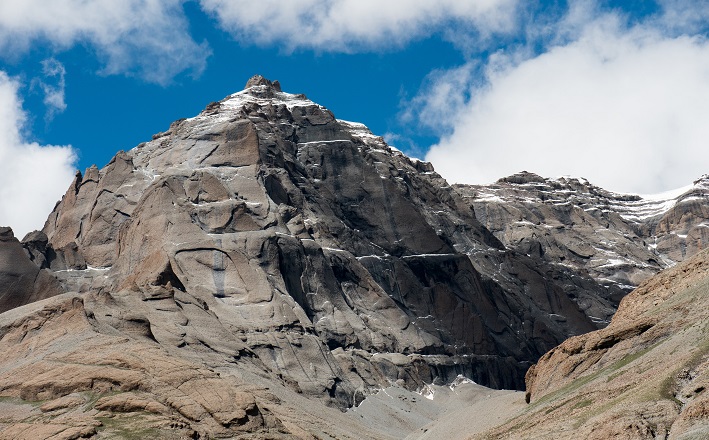 Photo by Raimond Klavins on Unsplash; licensed under CC0.

Editor’s Note: Working Preacher published commentaries that correspond with the readings for Season of Creation 2021: Series B (The Word Series). A full listing of worship resources (including liturgies to accompany the readings) can be found online at http://seasonofcreation.com/worship-resources/readings/.

Since ancient times, religious folks around the world have revered mountains as sacred “thin places,” from Mount Olympus, home of the Greek gods, to Mount Kailash in Tibet, dwelling place of the Hindu deity Shiva, to the Incan Macchu Picchu high in the Andes of South America. In the religious imagination of ancient Israelites, mountains likewise played a central role for revelation from and communion with God.

The great empires surrounding ancient Israel flourished in valley floodplains, particularly the Mesopotamian Tigris and Euphrates River valleys to the east and the Egyptian Nile River valley to the west. But Israel itself took root on the rocky spine of mountains stretching north to south on the western side of the Jordan River valley, called “hill country” in English translations of Scripture, but simply har, “mountain” in Hebrew. Near and far, majestic and scalable, mountains played an abundant role in the thinking of scriptural writers surrounded by highland vistas.

These writers tied Israel’s origins as a nation to holy mountains. On Mount Horeb, the mountain of God—also called Mount Sinai—Moses first heard God calling him to lead Israel out of slavery (Exodus 3:1-6). Later he brought the nation to receive God’s commands on the same mountain (Exodus 19-31). At the end of his journey, just before his death, it was from Mount Nebo on the east side of the Jordan River that Moses saw Israel’s destination (Deuteronomy 32:49-52). Thus Israel’s founding prophet’s own adventures were bounded by mountains fore and aft.

Much later, even though other mountains were taller, including the Mount of Olives directly to the east of Jerusalem, it was Mount Zion that was chosen for the site of Solomon’s temple, God’s holy mountain, the place where Judeans believed God’s name dwelled. Psalm 48 presents Mount Zion as “beautiful in elevation, the joy of all the earth” (verse 2), secure from advancing armies, terrifying to enemies, a symbol of divine faithfulness. Royal Zion theology, as the doctrine of Jerusalem’s God-granted security came to be called, is confidently expressed in Psalm 48:1-11.

When Jerusalem and its temple were shockingly destroyed in 587 BCE by the Babylonian empire, Royal Zion theology would seem to have come crashing down forever. Yet the book of Isaiah foresees restoration of Mount Zion’s holiness throughout, beginning in chapter 2, which envisions the nations traveling to seek divine instruction on this mountain.

In Isaiah 40, Mount Zion herself is instructed to rise up as a herald of God’s return to Jerusalem, a return described in Isaiah 52 as beautiful feet approaching over the mountain, witnessed by sentinels who sing for joy at God’s coming. And finally, Isaiah 65:17-25 announces “new heavens and a new earth” (or, as some note, “new skies and a new land”), a restored holy mountain on which none will be harmed, from which none will be removed, and where all will live to old age in security and plenitude. In other words, in the Hebrew Bible’s imagination, even a sacred mountain can be desecrated; but once desecrated, it can recover to once again shelter life.

For lovers of mountains who mourn over contemporary abuses, these are encouraging images. As eternal as mountains may seem to humans, we know that many ecological ills beset them, from mudslides caused by overlogging and wildfires to mining that poisons mountain streams, lays bare surfaces, and even removes peaks in search of cheap coal, to the disappearance of ancient and life-giving glaciers as temperatures rise. Such destructions may not be recoverable on the scale of human lifetimes, and they result in the diminishment of all. Yet, as Isaiah asserts, mountains can heal. They may never return to what they were before, but they may once again rise to display their majesty and support life.

The New Testament passages for this week are not specific to mountains. Both, however, highlight creation’s sustaining role for humans and all life. The well-known Romans 8:28-39 offers comfort in the midst of fear, reassuring that “neither death, nor life, nor angels, nor rulers, nor things present, nor things to come, nor powers, nor height, nor depth, nor anything else in all creation, will be able to separate us from the love of God in Christ Jesus our Lord,” a reassurance whose breadth can stave off the ecological despair that may threaten to overwhelm us today.

Likewise, the lesser known passage near the end of the shortest and earliest Gospel, Mark 16:14-18, though part of what scholars believe to be appended to the book by another hand, presents the risen Christ as telling his disciples, “Go into all the world and proclaim the good news to the whole creation” (or “to every creature”). While it may be tempting to superimpose similar passages onto this one, passages in which the audience is clearly human, the wording here in Mark is broader. It calls to mind the stories of Saint Francis preaching to the birds and other animal neighbors. Such a proclamation as this presumes that God’s message and intent benefit not humans alone, but all that God created.

In other words, what we proclaim ought to be good news not only to the human community but to the larger community of creation in which, by God’s grace, we dwell. This little passage might inspire us to ponder whether and to what extent our preaching, not just during the Season of Creation but throughout the year, is indeed good news for God’s creation.