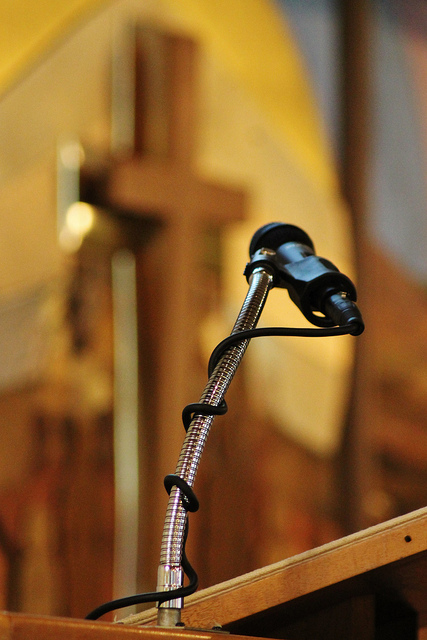 Last year Working Preacher gathered a talented group of clergy to discuss the interaction between preaching and liturgy.

I’m not sure when the conversation took the turn from liturgical language into the handling of church announcements, but the discussion had more energy than all the topics we discussed over lunch at Luther Seminary that day.

A great lament went up to God about the length, breadth, and often superficiality of the church announcements. Members of the group told stories of announcements gone wild, lasting longer than the sermon, careening off into advertisements for a daughter’s dance recital or a pitch for Girl Scout cookies. In some congregations, the announcements are the time when all the procrastinators, who didn’t submit their bulletin announcements on time, take the congregation hostage for last-minute information.

If they’re at the beginning of the service, people come late to miss them. If they’re in the middle, it breaks the liturgical flow, creating a STOP in the ritual action. If they’re at the end and are too long, people, already packing up to go, get irritated and don’t listen, anyway.

I won’t claim to have a solution on this dramatic topic. But I will suggest that, rather than think only of placement, we should think of the announcements themselves as a liturgical act. Rather than an interruption, is there a way to have them join the flow?

How does a welcome into worship include a welcome into the life of discipleship? Does baptism connect to our mission of service in the world? The gathering of gifts to the offering of time and talent? The sending rite, moving us from table to world? Is there language that we could include at the beginning and end of the announcements to connect them liturgically?

In one congregation, the announcements follow the peace and serve as a prelude to the offering. A member of the council comes forward, introduces themselves as a congregational leader, and invites the congregation to participate in a few mission opportunities that week.

The council member concludes, “As we offer ourselves in service, so we make our offering for the work of the church in this neighborhood and in the world.”

This congregation collects food during the offering as a regular part of the liturgy. This is explained, and then offertory music begins, and the work of offering takes place. The initial words of invitation and the conclusion are the same every week, shared by the different leaders, giving a sense of ritualized action. They also make an effort to cast what they’re doing in a larger context so that people understand the rite.

My theology teacher, Dr. Walter Bouman, always said that the time of the Prayers of Intercession is when the church does its business. Perhaps we should robustly pray for what the church is actually doing that week. Could we pray for the stewardship committee, the council, the child-care program on Wednesday nights? Of course, not crafting the prayers as announcements, adding time and place and the name of the person bringing snacks, but highlighting the work that the church is doing in prayer form. While not traditional announcements, it gives the assembly information about the actual work of the church.

I’ve heard of congregations that give the announcements as part of the sending. They’re done very efficiently and quickly, highlighting only those things which are key to the church’s mission statements and are directly service to the world. They avoid announcements about internal events and focus primarily on outward mission. They lead directly to the dismissal.

In my own context, the announcements come after the time with children, a natural break in the flow. Primarily, we think of this time as a welcome, an invitation to gather in community, highlighting just a few of the most significant events that are open to everyone, and then call for the community to gather around God’s word. The reader comes forward and the service continues.

Have you found a pattern that works, that connects to the liturgy, rather than stops it?

Bradley Schmeling’s regular Working Preacher column, “Designing the Mystery,” looks at how to plan worship and preaching that connects with the liturgy.