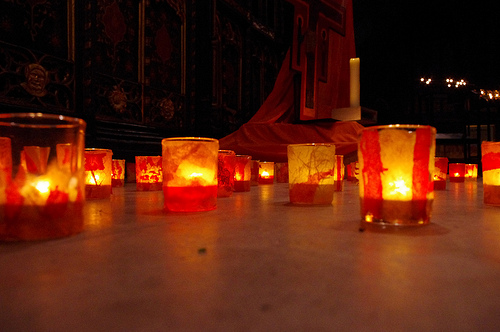 It might seem that an article about silence for a preaching website would be a waste of time.

But after a handful of experiences with the Taizé Community, I am beginning to wonder if silence isn’t exactly the waste of time preachers need.

I recently went to the Taizé Pilgrimage of Trust in Chicago, and the experience got me thinking about the relationship between preaching and contemplative silence. When I first visited the Taizé Community in the summer of 2010, I realized that during worship at Taizé, proclamation is a sermon-length silence begun shortly after the gospel is read. One commentator drawing a comparison between Taizé’s silence and preaching, wrote:

In a way, the silence operates much like a sermon would in our contemporary worship services. After the Word is read, the pastor usually explains, illustrates and applies the Word to our daily lives. In Taizé, however, there is no explanation for the texts in the prayer times. Rather, the text is allowed to speak for itself.1

Like many first-time pilgrims to Taizé, I wasn’t sure what to do with the silence at first. It didn’t seem like it would ever end. It seemed like a waste of time.

But after several silences, I discovered that the juxtaposition of gospel and silence became penetrating. In the words of French writer and theologian, Oliver Clément, “in that prayerful silence, the deep forces that exist in everyone but which are normally dormant begin to wake up.”2

After my most recent experience with Taizé, I began asking, what if silence-as-proclamation implies something that goes beyond the usual pragmatic justifications for silence in preaching circles. For instance, meditative silence may be good for sermon preparation and brief silences may be good rhetorical tools.

Crazy as it sounds, I’ve come to the conclusion that Taizé’s silence has something to teach preachers about preaching out loud. Maybe it’s not a technique or new sermon form, but something simpler. Perhaps it’s just a couple of nudges or habits of mind, something more suggestive than prescriptive.

In particular, I’ve concluded that 1) Taizé’s silence reminds us that for the gospel to be proclaimed we have to invite our hearers how to be listeners, and 2) such silences remind preachers that some things are beyond the grasp of words.

First, in modern America, it has become a trope to talk about how busy and noisy our lives are. Hidden in this oft-heard critique is the reality that we have lost the art of listening. So, it strikes me as thoroughly naive to imagine that — in general — our hearers on Sunday morning are great listeners.

Something about the silence of Taizé attenuates pilgrims to listen with expectancy. It teaches listening — listening to “God’s voice…[often] heard only in a whisper, in a breath of silence.”3

Additionally, this silence projects a trust — a trust that the Word will find its way to listeners’ hearts. Silence in this way creates a thirst for words of simplicity, words that are expansive rather than words that prematurely provide closure of meaning.

Clément writes, “At Taizé…through a discipline of silence…[pilgrims] are taught words that are not banal, not radio or television words, but words which are made to nourish the soul, and which will permeate their lives.”4

This begs the question, how can preaching be a qualitatively different kind of speech, one that can be distinguished from the noise, one that models trust? Moreover, Taizé’s silence confronts the preacher asking how we can craft sermons that open up, inviting the hearer into a posture of expectant listening rather than reducing a text to something imposed, something that can be applied or explained.

This silence stands as a subtle-yet-profound critique against the preacher’s desire to explain everything. There is a sense in which much of contemporary preaching attempts to provide a sort of handle on biblical texts — a way to grasp and instrumentalize. Silence, on the other hand, presses the preacher to discern how we might preach in ways that allow Words to get a handle on us.

Second, such silence witnesses to the reality that “when we try to express communion with God in words, our minds quickly come up short.”5 Rather than piling words on top of words, as if our sermons are a kind of verbal scaffolding ascending to God, Taizé’s silence gestures toward the limits of words in capturing the Divine. Silence reminds us that God’s Word captures us; our words do not capture God.

Silence reminds us — especially preachers — that words cannot grasp everything, implying that what preachers remain silent about may be just as important as what we say. There are limits to what can and should be said. Perhaps our proclamation would be deeper and more honest if we could bear witness to God who, at times, “leaves us speechless.”

Several weeks ago I was leading a retreat with a group of college students, trying to drive a point home during a break, when a student blurted out, “Don’t you ever shut up!” Fair question. It’s also a fair question for preachers in general.

Preachers often seem to have words for everything. Maybe this is not such a good thing. Carefully discerning the limits of language, especially in sermons, points to something outside us, something that we can’t manage or handle. These limits witness to God.

Of course I’m not suggesting that we should toss out the sermon and replace it with fifteen minutes of silence every week. Personally, I’m fond of preaching-as-proclamation.

Taizé is a unique context, and the point is not replication. Rather, I want to suggest that taking silence-as-proclamation seriously may provide a well-spring of resources for the preacher.

It might just BE the waste of time that many preachers need.