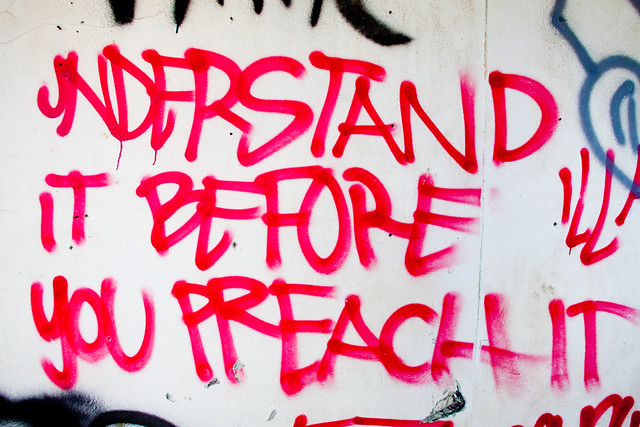 There are some tough texts coming up in the lectionary. I’m thinking especially of the Hosea 1 text for July 28th (listen to my podcast on this passage), where God calls the prophet Hosea to perform a prophetic act by marrying a prostitute and shamefully naming their children. It’s not necessarily a literal story. But even as an allegory, it makes us rightly uncomfortable for the way it portrays sexual ownership of women and a divine willingness to use children to shame others.

Tough texts like this show up in the lectionary every so often. They contain violence. They contain sexism. They contain content that makes pastors squirm and parishioners say things like, “I just don’t like the God of the Old Testament.”

And I have an odd request for you: preach the tough texts.

I know it’s a tall order. It’s maybe even an impossible request: you know your context better than I do. If a family has recently struggled with infidelity, conflict, or domestic violence, maybe you’d be better off skipping that particular Hosea reading.

But then again, maybe not.

I heard the staggering statistic recently that 1 in 3 women have experienced violence by an intimate partner. No less disturbing but much less discussed is the corresponding statistic that 1 in 4 men have been victims of such violence as well. That means that biblical texts referencing intimate partner violence will hit home for a third of the women and a quarter of the men in your congregation, statistically speaking. So maybe it’s treading on dangerous territory when you don’t know the full stories of the people in your pews.

But then again, maybe not.

There are three main reasons I am making this plea to you today.

If this issue is truly as prevalent as the above statistics convey, then it should be talked about at every pulpit in the nation. It doesn’t have to be a whole sermon; it doesn’t even have to be a whole minute. But a mention, an acknowledgment — perhaps even a lifeline — could make more difference than you know.
That’s Reason #1.

Reason #2 comes from an even more difficult place, believe it or not: violence towards domestic partners, especially women, is in our tradition. Worse, it’s embedded in our Holy Scriptures. Hosea, Jeremiah, Isaiah, Ezekiel — the lists goes on and on of prophets who lived through traumatic times. When they used imagery to communicate the word of the Lord to God’s people, they used graphic images to do so. Sometimes they were disturbing images. And sometimes, they were downright violent, notably violent against women (see, for example, Ezekiel 16).

And those right there are the passages that rarely make it into the lectionary. But, they remain in our Holy Scripture, the Word of the Lord, the Cradle of Christ, as Martin Luther called it. Being silent about them doesn’t solve the issue; all it does is make it more difficult for parishioners when they stumble across those passages or have them thrown at them unsuspecting.
We need to be honest about our heritage. We need to admit the damage that biblical metaphors have done to women. And the best place to start doing that is from the pulpit.
That’s Reason #2.

Reason #3 is perhaps the most freeing and, in my mind, the most compelling of them all: It makes for better preaching. Hosea is making a point in Hosea 1 about the utterly nonsensical actions of Israel in forsaking God — in other words, the things the Israelites are doing that are destroying them from the inside out. Hosea preaches a powerful message of the blind things that we do that ultimately devour our ability to live thriving lives. The metaphor may be broken, but the message certainly is not, and it may be one that your people are desperate to hear.

In addition, the metaphor of Israel as faithless wife is not the only metaphor in the book. In fact, it’s followed the very next week (August 4, 2019) by Hosea 11, one of the most tender portrayals of God in the whole Bible. God self-identifies as Israel’s mother, and we get a window into the divine inner struggle as God is torn apart by whether to approach her faithless children with wrath or to enfold them in mercy. (Spoiler alert: She chooses the latter.)

It’s a powerful text. It may be even more powerful for many women in your congregation who are mothers but have rarely — if ever — heard God discussed in that way.

But, you would be doing a disservice to the Scriptures and to your people if you preach Hosea 11 without preaching Hosea 1. Preaching both does justice to the complicated nature of our Holy Scriptures and of life, for that matter, both of which can both be full of awe and awful. Your people and the Bible deserve honesty about that.

1 U.S. Centers for Disease Control 2010 report: https://www.cdc.gov/violenceprevention/pdf/nisvs_executive_summary-a.pdf
2 See “How to Talk with Young People about ‘Adult Content’ in the Bible,” a 2014 article and accompanying podcast by Michael Chan on EntertheBible.org: http://www.enterthebible.org/blog.aspx?m=3783&post=3233