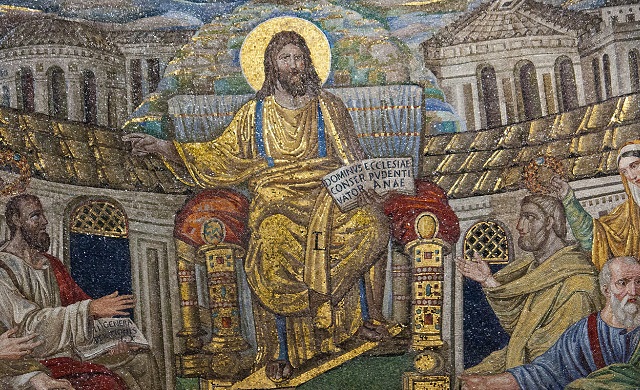 Preaching through the year of Matthew in the Revised Common Lectionary (RCL) presents both opportunities and challenges. First I’ll look at the dynamic aspects of Matthew’s Gospel in relation to the lectionary cycle, followed by special consideration of three aspects of Matthew that preachers will encounter throughout the year.

Studies of Matthew have often focused on the structure or architecture of the book. Many have noted its five large blocks of teaching material. More important for preachers, however, is to keep the dynamic quality of Matthew in mind. Over ninety percent of Mark’s Gospel is included in Matthew, but Matthew re-proclaims the message in a new context. At the time Matthew’s Gospel was written, Christian communities had existed for a couple generations, and community life seemed to fall short of what seemed promised by the kingdom of God. Matthew rekindles faith by re-proclaiming the Gospel in this changing and challenging context.

The contours of Matthew’s Gospel follow a dynamic movement. The story begins with Jesus’ genealogy, which outlines a story unfolding generation after generation. The Gospel culminates with the Great Commission in chapter 28, which anticipates the continued work of the risen Christ through the witness of his followers. That dynamic continues in Matthew’s time and in ours.

The Revised Common Lectionary does not neatly follow Matthew’s outline but begins with an apocalyptic scene in Matthew 24, then moves back to chapter 3, then chapter 11, and finally to chapter 1. From Christmas onward there is a more sequential reading of Matthew, but even then the readings shift to John during Lent and Easter, and the Great Commission appears on Trinity Sunday, before we pick up Matthew’s storyline again. So it is up to the preacher to keep the big picture in mind.

The readings from Matthew begin with the apocalyptic warning in 24:36-44, and similar warnings appear in parables and other passages. A warning is designed to bring change that will avert disaster and promote life and wellbeing. The context is that danger is real and hope is real. When a child chases a ball into the street and a car is coming, we warn, “Look out!” The danger is real and the goal is to bring change that preserves life.

In Matthew 24:36-44 the danger is not simply judgment but complacency. People seem indifferent to what is going on and in 24:47-49 that leads to harsh treatment of others. There is surprising hope in a God who is not content with the status quo, whose purpose is to gather people into the kingdom, pictured as the coming of summer and welcoming a king (24:31-33).

The passage compares the situation to the time of Noah, where people had filled the earth with violence. God warned Noah about the judgment coming through the flood, but God also called Noah to share in God’s redemptive purposes by building the ark to preserve both people and animals. The warning directs Noah toward hope, and the response is renewed attention and commitment to the redemptive purposes of God.

Similarly, the second reading for Advent concerns John the Baptist (Matthew 3:1-12). The warning to the “brood of vipers” about the “wrath to come” is jarring. During Advent we would rather focus on something festive. Yet the passage does not speak of wrath in a far-off apocalyptic scenario. It portrays wrath as that which cuts and burns even now. We experience it when we know that expectations are high and we do not measure up. The sense of falling short—whether in relationships, jobs, or some other way—does “burn.” We feel it.

The hope comes from a different fire, the Spirit’s fire, which kindles the flame of faith. The passages describes a purifying judgment, like threshing grain. Grain is always mixed, as are people. The grain has the kernel and the outer hull, which must be shaken loose. Threshing means tossing it all into the air again and again, so that the outer hull is removed and the previous grain can be gathered in. Similarly, Christ comes to shake and disturb, removing the protective hull, but claiming the precious grain—the person—for life with God.

Fulfillment as disclosing fullness of meaning

Matthew often uses the word “fulfill” when linking Old Testament texts to Jesus. People sometimes assume that the basic idea is that the Old Testament predicts something and in Christ it occurs. A more helpful angle is that fulfillment is disclosing fullness of meaning. There is a two-way movement. Matthew portrays Christ in light of the Old Testament, and he reads the Old Testament in light of Christ. We rightly recognize that Old Testament passages are meaningful in their own contexts, even as relating them to the story of Jesus opens up new insights.

Matthew 1:18-25 says that Jesus’ birth took place to “fulfill” Isaiah 7:14, which is quoted as, “Look, a virgin shall conceive and bear a son, and they shall name him Emmanuel,” which means, “God is with us.” If we reduce the passage to a simple prediction of the virgin birth, which now occurs, it raises a host of issues. For example, we have to base the prediction on the Greek translation of Isaiah, which reads “virgin,” rather than on the Hebrew text, which reads “young woman.” It also means ignoring the fact that Isaiah originally spoke about a child born in his own time.

If we take fulfillment as disclosing fullness of meaning, we can acknowledge that the passage originally spoke of a child born in Isaiah’s own time, when Israel faced the threat of war. The Emmanuel promise assured people that despite the threat, God was with them and would open up a future for them. Matthew recasts the promise so that it pertains to God’s power to give life where one would not expect life—the womb of a virgin. That promise also met Joseph in a context of threat—the threat of shame. Yet given the promise, Joseph is able to continue in relationship with Mary, confident that God was opening up a future. The promise would continue to expand, so that it included hope of redemption for all who are threatened by sin.

The Sermon on the Mount, which is read during Epiphany, also construes fulfillment as fullness of meaning. Jesus says that he came not to abolish the law and the prophets but to fulfill them (Matthew 5:17). The idea is not prediction and occurrence. Instead, Jesus shows us what he means by examples in which he acknowledges the basic meaning of the commandments but then shows us the fuller sense. The commandment, “You shall not murder,” has a very direct meaning in terms of not unlawfully taking the life of another person. But then Jesus points to the phenomenon of anger, which finds expression in murder and in hurtful and destructive speech (5:21-22). He is calling for a “righteousness” that goes beyond the letter of the law (5:20). The righteousness of which is speaks is not only negative (refraining from murder) but positive: making things right again. And he points to that fuller and positive sense in acts of reconciliation (5:23-25). That, for Matthew, is fullness of meaning.

Matthew addressed Christian communities one or two generations after the ministry of Jesus had ended. The readers were not necessarily in severe crisis, but they did encounter deeply discouraging situations. Preachers will readily see analogies for communities today. In such circumstances, the focus of good news is not necessarily forgiveness of sins but hope for the discouraged and despairing.

We find this already on Advent 3, where John the Baptist is in prison. He asks whether Jesus is the promised one or if people need to look for someone else (Matthew 11:2-11). Jesus responds by telling John about people being healed, the dead being raised, and the poor hearing good news. So we might wonder why John would need to ask. Yet he does. He might be a powerful prophet, but he is in prison with no release in sight. It does not look like the kingdom has arrived—at least not for him.

During Advent, people often do have raised expectations. Yet the realities that hold us captive remain real. Experience seems at odds with the promise. Yet Jesus continues proclaiming the promise in ways that are designed to hold people captive to hope, not despair. The hope is that by the grace of God there can be a future that is not confined to the dispiriting realities of the present.

The Beatitudes, which are read during Epiphany, develop that pattern even further (Matthew 5:1-12). The beatitudes name the deeply discouraging realities that people experience. The poor in spirit are those who are dispirited, empty, and discouraged. Those who grieve are burdened by the loss of people and ways of life that were dear to them. The meek are the vulnerable. Those who hunger and thirst for righteousness are keenly aware that things are not right in the present. Life can be very unfair, and they want the “righteousness” that is truly a “making right.”

The word “blessed” in Greek is makarios. To be blessed is to be valued by God, favored by God. The juxtaposition is profound. People are dispirited and grieving and they are blessed. Both are true. The beatitudes do not dismiss what people experience. Rather, they offer the assurance of grace even as people grieve—and must have the opportunity to grieve, because loss is real. And the beatitudes also extend the promise that grieving is real but not final. By the grace of God there can be a future that is not defined by the grief of the moment, but one in which the grace that brings comfort can be experienced.

Matthew’s Gospel re-proclaims the good news in new ways in changing contexts, and it provides a wealth of perspectives that invite contemporary preachers to do the same.