How to Preach to Mikey (and His Parents) 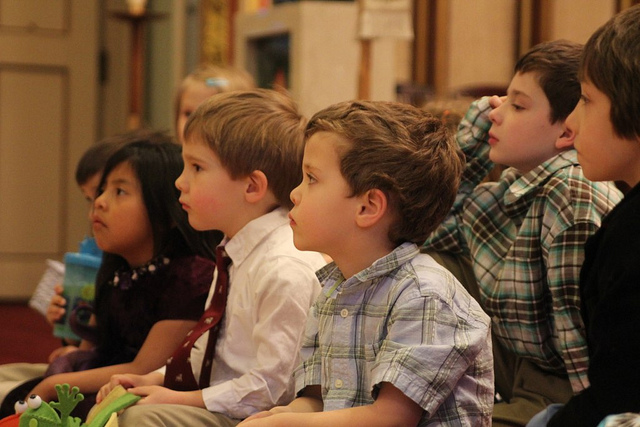 Working Preachers, does this sound familiar: you’re wheeling your cart through the grocery store when you see the nice young couple from church who sit with pained expressions as they try to keep their young kids behaving — their daughter SCREAMED through the sermon and they haven’t been back since. Your carts approach, they smile guiltily and say, “Hi, Pastor; I know we haven’t been to church lately — with trying to wrangle these two, we just don’t get anything out of the sermon…”

Recently, I had the chance to be one of those parents in the pew with my 3 ½ year-old and my 22-month-old. It was one of my rare Sunday vacations, and sure enough, during the sermon I alternated between finding more Cheerios, picking up the lost toy, sliding my 22-month-old OUT from under the pew, and, rarely, actually listening.

And truth be told: I didn’t get very much out of it.

Now, before we get sidetracked, let me state it clearly that I don’t truly “buy” that as an excuse for young families not to come to church. I’ve witnessed powerful acts of a village raising a child when a church rallies around a young family whose children are learning how to be in church. And ultimately, it’s not about what the parents get out of the service: it’s about God. I’m on board.

But after my recent experience of actually being one of those parents in the pew, I started to wonder: are there perhaps some practical tools that preachers could implement which could help those young parents “get more” out of the sermon? Could those same practical tools assist the whole congregation in staying engaged with the sermon when a 2-year-old is having a “Terrible Twos” moments? Is it possible those rhetorical tools could actually make the sermon more accessible even to the youngest members of the church while still allowing the content to be at a high theological level?

After some thinking, experimenting, and some good ol’ millennial digital crowd-sourcing, I’ve come up with a few suggestions on preaching so that Mikey, his parents, and the whole congregation might actually be able to hear you:

One of our goals is to make our sermons, as Leon Morris said of the book of John, “shallow enough for a child to wade and deep enough for an elephant to swim.” As Working Preachers, we’re usually pretty good at making room for elephants; here are just a couple of tips to offer our youngest Christians — and their parents — a bit of a Puddle Jumper along the way.