Preaching Acts in Easter (Year B) 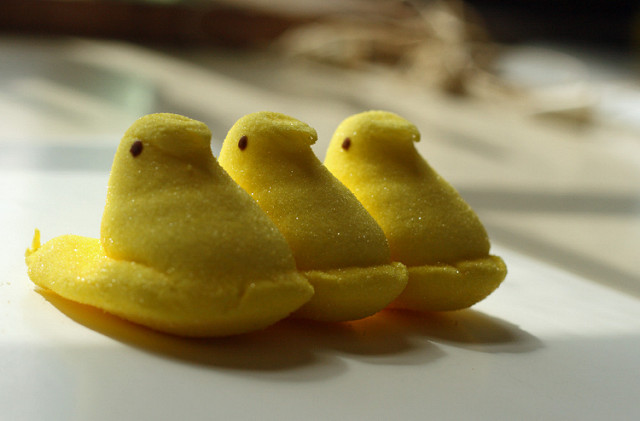 As reliable as lilies, bonnets, and chocolate bunnies, every year the Acts of the Apostles shows up during the Easter season. While some preachers reach excitedly for Acts like a friend who has been away for too long, others regard the book more like those marshmallow Peeps® by the cashier counter — tempting to look at, but a little weird.

Last year I wrote in Working Preacher that Acts has a way of expanding our imaginations. The story is big and bold because the book celebrates the new possibilities that spring into being as the people of God start coming to grips with the wonder of an empty tomb and the prophetic initiative of God’s Spirit. Acts is a book about daring — not necessarily heroic — communities of faith. They are daring because they, led by the Spirit, open themselves up to defying or surpassing the limits imposed by the status quo.

What do those aspects of Acts look like this year, in the lectionary’s Year B and the particular readings it assigns from Acts?

From Easter Sunday through Pentecost, all of the Year B texts from Acts give us glimpses of believers in action, seeking to be responsive in various ways to their understanding of what God has called them to do and to be in a post-Easter world. Jesus describes that calling in Acts 1:8 when he declares, “You will be my witnesses” not only in Jerusalem but eventually “to the ends of the earth.” If we view the Year B passages in light of the foundational commission in Acts 1:8, Jesus’ final words before his ascension, we might understand the passages as illustrating the variety of ways in which the people of God act as Jesus’ witnesses. The empty tomb of Easter eventually propels them to tell, through words and deeds, what they have seen and what they know. Acts shows us the different forms that this kind of testimony might take whenever communities of faith recognize that God has expanded the horizons and the all-too-familiar threats of death and empire have started to look less absolute.

In Acts, believers bear witness through more than preaching, although that activity receives much attention in the narrative as a whole and in the annual Easter Sunday reading: Peter’s short sermon in Cornelius’s house (Acts 10:34-43). Generosity and service also characterize the community of faith, as seen in Acts 4:32-35 (Easter 2), when people share their wealth not to “support the church” in some vague sense but to alleviate their neighbors’ needs (see Deuteronomy 15:4). Such patterns of mutual commitment among believers signal more than effusive goodwill; those practices express the community’s understanding of itself to be a clear, lived manifestation of the wholeness and dignity that Jesus himself confers upon people.

When Peter addresses a crowd in Solomon’s Portico in Acts 3:12-19 (Easter 3), he reminds us that, in telling what we know about Jesus, the church urges people to repent. In other words, if the Christian message is to include hopeful words about the restoration God will bring it must also speak frankly about people’s complicity in the kinds of violence and evil that send a righteous man to his crucifixion while allowing a murderer to walk free. To “repent,” as this passage understands it, entails acknowledging our culpability in the ways we, our systems, and our leaders mock God’s desires for human flourishing. Peter and all of Jesus’ followers urge the wider world to own up to its rebellion and injustice and to see another way: one in which God pledges to put a stop to both hostility and ignorance by bringing life out of death.

Peter continues to speak about God’s salvation in Acts 4:5-12 (Easter 4), when the Jerusalem priestly aristocracy demands to know what was going on in the temple in Acts 3. As he relates the healing of a man who could not walk to the salvation that Jesus brings, Peter does two things that exemplify the church’s work as a witnessing community: he interacts with scripture (Psalm 118:22) and he reiterates the holistic character of God’s salvation. Like Jesus in the Gospels, the church recognizes and attends to the connections that exist among physical, social, and spiritual well-being.

In the fantastic story of the Ethiopian Eunuch in Acts 8:26-40 (Easter 5), Philip, representing the larger church, observes and participates in the obliteration of conventional barriers that guard the divisions we employ to separate the groups we construct, whether the divisions are guarding insiders from outsiders, the familiar from the unusual, or hoped-for promises (which are safe) from their fulfillment (which can be unsettling). The Ethiopian, who defies so many stereotypes, moves from confused reader to insightful theologian in the span of a couple of verses. His insight comes in a confident question (“What is to prevent me from being baptized?”). The confidence demonstrates that he understands the Easter message as a declaration that God is indeed bringing new possibilities to places and people that might have once seemed “far away” (2:39) to some.

The giving and receiving of hospitality appears in Acts 10:44-48 (Easter 6). For Peter, the sudden arrival of the Holy Spirit settles the question of whether Cornelius and his household need to hear more preaching or fulfill additional requirements. The two groups — Jews and gentiles — who gathered together in Caesarea become one through an act of God. Baptized, Cornelius and his associated are welcomed with open arms. Likewise Peter and his companions stay as guests. Old assumptions about what it means to be clean or acceptable fall away. In opening itself up to divine leading and the Spirit’s presence, the church opens itself up to other people. As a result it is changed forever.

In a peculiar story of trusting a lottery to choose a replacement for Judas Iscariot in Acts 1:15-17, 21-26 (Easter 7) the community of believers can be said to tend to its own communal health and its need to identify new leaders. We might choose a different selection system and should certainly consider a wider range of candidates for the work of ministry, but nevertheless in this passage we see a community of 120 women and men that is aware of the gravity of the work to which Jesus has called it. This passage takes us back to the opening verses of Acts, and that community will make mistakes as the narrative rolls on in subsequent chapters. Its members will struggle to keep pace with where and to whom God leads them. But in Acts 1 they are already learning — all of them, not just the twelve who get to be called “apostles” — that they have work to do as they try to make it clear that all sorts of things are becoming possible in this post-Easter world.1

1 For more on Acts and how it shapes imaginations about God, the gospel, and the church’s ministry, see Matthew L. Skinner, Intrusive God, Disruptive Gospel: Encountering the Divine in the Book of Acts (Grand Rapids: Brazos, 2015).