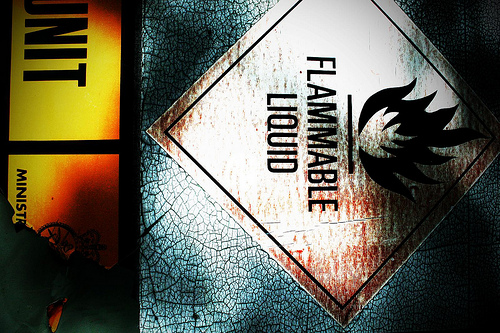 Some biblical passages, like some flammable materials, should probably carry a warning label: handle with care. This story – with its attendant questions of evil, culpability, and divine judgment and forbearance – is surely one of them. But if handled with equal measures of care and courage, it may yield a powerfully relevant sermon.

While we read this story in isolation, it doesn’t occur that way. In fact, we are entering an ongoing conversation midstream. Jesus is on the way to Jerusalem, teaching his disciples and the crowds as he goes. In chapter twelve he has told several potent parables on money and foolishness and always being prepared. He concludes by suggesting that those listening are not just missing the point of his stories, but missing the boat altogether: “You may be able to read the signs to predict the weather,” he says, “but you are utterly clueless about reading the signs of the times.”

Which may just precipitate this exchange, as a few of his listeners apparently object. Citing Pilate’s recent slaughter of some Galileans who had gone to Jerusalem to worship, some in the crowd strain to show their mastery of theology as well as meteorology. Or at least that’s the way Jesus reads it: “Do you think that because these Galileans suffered in this way they were worse sinners than all other Galileans?” he asks.

Before jumping to Jesus’ response, let’s linger with the question Jesus assumes they are asking. After all, it is one of the most common questions asked, then or now: Are the bad things that happen to us our fault? Do we deserve them? Are they, in fact, at least the consequence of, if not punishment for, our sinful deeds? We may ask that question in a relatively mundane, even superstitious way, when something relatively minor goes wrong and we wonder, “What did I do to deserve that?” Or we may echo this question in a much more profound, heart-wrenching way when calamity strikes. I’d be willing to bet that almost all of us have sat with someone at the hospital or in the funeral parlor who attributes grave illness or death to God as some form of punishment.

More often than not, we recognize that that moment is not the best time to correct their theology. As inadequate or unhelpful as it may appear to us, their sense of divine retribution lends them a sense of stability and order in a terribly confusing and chaotic time. Better imagine the calamity comes from a punishing God, they may feel, than believe it comes from nowhere and is a harbinger of a chaotic and even meaningless world.

Jesus, however, apparently hadn’t taken Clinical Pastor Education because he confronts their bad theology head on. “Do you think that because these Galileans suffered in this way they were worse sinners than all other Galileans? No, I tell you; but unless you repent, you will all perish as they did.” And, in case they miss his meaning, he adds his own story of recent calamity and repeats his point: tragedy is not a punishment for sin. Good news.

Because some calamity is a result of sin. What if the wall Jesus references was built by a fraudulent contractor (my guess is they had those back in the first century too)? There are all kinds of bad behaviors, in fact, that contribute to much of the misery in the world.

Because Jesus next line scares me. “But unless you repent, you will all perish as they did.” We don’t know, for sure, what precisely Jesus means by “as they did.” Does it mean that they – we! – will be struck dead by sudden calamity, or whether we will be separated from God, or whether we will just die at some unknown future point still mired in our sin? We don’t know. We do know, however, that Jesus’ words call into question some favorite Christian assumptions.

For those who lean far to the left, note that Jesus does not remove a sense of impending judgment. Which, I think, is a good thing, as the flip side of judgment is justice. God cares about how we live our lives and treat each other and will hold us accountable. For those who lean far to the right, note that Jesus doesn’t prescribe what the impending judgment amounts to, and I think that’s good news as well lest we presume to call God’s judgment too quickly onto others.

All that said, we are still left with a certain amount of ambiguity about precisely what Jesus means. Rather than try to resolve things too quickly, let’s turn for a moment to the parable he tells as an elaboration on the pronouncements he has just made. The scene is a familiar one not only to landowners but to anyone who has ever had even a vegetable garden. Sooner or later, you uproot the plants or trees that are not bearing fruit. So upon finding a fig tree that is alive and well yet bears no fruit, a landowner instructs his gardener to get rid of the tree. The gardener protests, asking for one more year, one more year in which to tend the tree by loosening the soil and spreading manure around it. But if it does not respond, the gardener agrees, then, yes, cut it down.

It’s fairly common to assume that the landowner is God and the gardener Jesus. But nowhere in Luke do we find a picture of an angry God that needs to be placated by a merciful Jesus. Rather, Jesus’ portrays God as a father who scans the horizon day in and day out waiting for his wayward son to come home and as a woman who after sweeping her house all night looking for a lost coin throws a party costing even more to celebrate that she found it. Given this slightly different picture of God’s reaction to sin, I wonder if we wouldn’t do better to imagine that God is this peculiar gardener, the one so partial to unyielding fig trees. God, that is, isn’t beneath loosening the soil around us and even spreading manure in the hope that we may bear fruit. Why? Because God loves us and wants the best for us.

And there’s just no “sort-of” about that good news.

So why do bad things happen to good, and sometimes not-so-good, people? Jesus doesn’t say and neither can we. Sometimes misfortune is of our own making and sometimes it is tragically unlucky. But Jesus, son of the all-loving God, isn’t beneath using such occasions to invite us to wake up – or in this case, turn around (repent!) – so that we might look differently at our life and world. Jesus isn’t beneath taking the daily news of his day or ours and using it to jar us into recognizing that life is a gift, that God is seeking us out, and that there is so much good we can do with the time we are given. We do not know how long that time is or how it will come to a close, but we do know it is a gift, not to be squandered by rather spent in the pursuit of good things for God’s people.

So tell your people that, Working Preacher, that God is inviting us not to be daunted by the headlines we read but rather focused by them on the gifts and good work right in front of us. And tell them that God is digging around our roots, spreading manure in the hope that we’ll blossom and bear fruit. And tell them that God loves us, loves us, loves us, enough to hold us accountable for our faults and forgive us our sins as long as this life shall last.

This is no easy passage, Working Preacher, and you may go in a very different direction altogether, but know that each time you open up the flammable Word of God, the Holy Spirit is using your words and work to kindle faith in another. Thank you. Thank God for you.