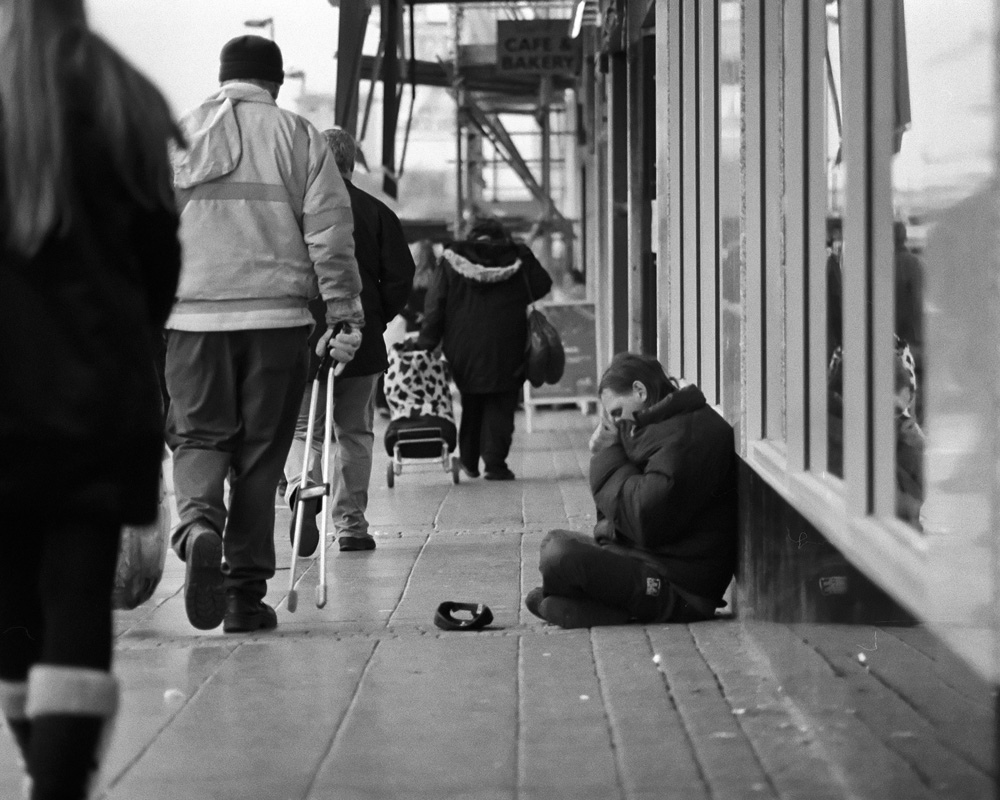 “You lack one thing.” There is great irony in Jesus’ statement, isn’t there? We can likely assume that given his wealth, his many possessions, the rich man lacks nothing. What could he possibly be without? What wouldn’t he be able to purchase, to acquire, to make happen in his life given what he clearly has? After all, wealth provides you with everything you could possibly imagine, right?

Better translated, however, Jesus says to the rich man, “you are lacking in one thing,” that is, the difference between a noun and a verb. What he lacks, therefore, is not something but a certain state of being, a way of being, an orientation in the world and toward the world by which one’s past, present, and future is bound to relationship — a relationship with Jesus, and therefore, identity known in and because of community.

Notice what surrounds Jesus’ response to the rich man, “you are lacking in one thing” — four important verbs that by themselves and on their own indicate just how and in what ways the rich man is deficient. Jesus “looked” at him and “loved” him. Jesus asks the rich man to “come” and then to “follow.”

Where the rich man has come up short is in the actions of looking and loving, of coming and following — all of which ask for attentiveness that turns toward the other. That demand looking beyond one’s self. That insist the answer to the truest treasure is not in the pearls you purchase for yourself, but in how your prosperity propels you to notice the people in your midst, the people in need, the people who are incapable of building up or contributing to the power you so desperately want and that which you hold on to, regardless of the consequences.

And so, as it turns out, what the rich man lacks is his everything. How his wealth has worked against connection. How he has revered his riches over relationships. How he has rejected community for the sake of acquiring more. What Jesus offers the rich man is, perhaps, a relationship perceivably out of his reach or that he has eschewed and then used his riches so as to fill the void. Jesus doesn’t stop at, “sell all of your possessions,” but “sell what you own and give the money to the poor.” A mandate to look outside of himself. A command to imagine that life’s worth can never be met by the self alone.

This is the danger of wealth — its lure toward a belief in utter self-sufficiency. Its ability to convince us that our siloistic decisions are justified or are worthy based solely on our own self-validation. Its sway toward a kind of power turned in on itself, for the sake of the self, and that fights to hold on to that power no matter what, no matter what vision and ideals are sacrificed in the process, no matter who is thrown under the bus.

We don’t have to look very far or very wide to see this dynamic at play in our world. The way in which holding on to wealth ends up an insular endeavor. And while we might try to convince ourselves that wealth doesn’t matter, that its perpetuation toward corruption would never touch us, that we could easily reject its enticement of a guaranteed worry-free life of ease, Jesus comes along and tells us the truth. Jesus is good at that. Telling us the truth about ourselves.

This is not just a lesson that wealth is inherently bad and that you should give more money to the poor. It is, rather, an insistence that wealth without a commitment to connection will pull you away from the relationship that Jesus wants for you, that God became flesh for you. That wealth without seeing the other, among other things, leads to narcissism. Wealth without loving the other exposes the absence of empathy. Wealth without the risk of answering an invitation to join something outside of yourself, to follow a path not known, not planned out, results in fear.

The point? It is not what Jesus asks us to give up but in what and in whom Jesus needs us to give in. That a letting go ends up being a leaning in. That yielding to an agency outside of capital might bring us power beyond that which we ever imagined. Because wealth without compassion leads to complacency. And wealth without a sense of possibility leads to a kind of apprehension that inevitably results in self-preservation.

We are lacking in one thing indeed. But hear Jesus’ promise, a promise hard to hear in “take up your cross,” in “sell all of your possessions.” The promise of himself. A promise that leads to a life outside of yourself. And more than ever, perhaps, this is exactly what the world needs.

A Season for Truth Telling

What Are You Waiting For?

Find Refuge in the Face of Hostility