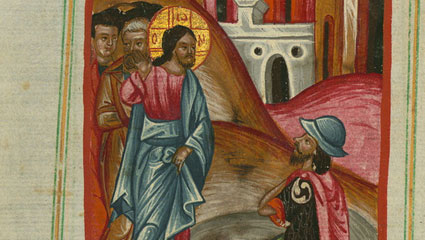 By and large, I’ve typically read the story of Jesus and the centurion as a tremendous story about the nature of faith. To the question, “What is faith?” this story offers a clear answer. I mean, here’s a guy who so trusts Jesus’ ability to heal that he sends a servant to tell Jesus to just say the word. That’s right, he tells Jesus not to even bother showing up, but simply to give a command. Why? Because based on his position as a centurion, he knows what authority is and he believes Jesus has it. Now that’s faith!

In her Working Preacher commentary this week, however, Jeannine Brown reminded me of just how unlikely a character this centurion is to demonstrate faith. He is, after all, a Roman centurion and we don’t typically look to legionnaires for examples of piety, particularly not when it comes to Jewish religious figures.

But beyond being unlikely, he is also – and this may be even more important – unexpected. This in two regards. First, Jesus himself is rather taken aback by the centurion’s confidence in him; indeed, Luke describes him as being amazed. “Not even in Israel have I found such faith,” Jesus says in response to the message sent from the centurion.

God regularly shows up where we don’t expect God to be and never, ever stops delighting in surprising us.

But I suspect it wasn’t only Jesus who was amazed. After all, Luke’s original readers hear this story thirty or forty years after the events narrated took place, and one thing that hadn’t changed across those decades was that Rome was still in charge, still occupying Israel, still enforcing its will upon Israelites of all ranks and stations. Which means that this centurion is, well, a centurion, one who – as he himself admits – is used to giving orders in the Roman army and having those orders obeyed. He is, then, one of those directly responsible for Israel’s oppression.

But I wonder if that’s not part of the reason this story is shared by several of the Evangelists in the first place. I mean, just because this man is in the Roman legion doesn’t mean that he is incapable of doing good? Clearly he already has. Indeed, the Jewish leaders in his town commend him to Jesus. Further, given that he was well acquainted with these leaders, should we be surprised that he has heard of Jesus and is therefore eager to beseech him on behalf of his servant?

All of which means he is more complex than perhaps many of his day or ours want to make him out. He is a Roman centurion and a man who does good for those in his community. He is part of the force occupying and oppressing Israel and he builds synagogues for the townspeople under his authority. This passage reminds us that we should never reduce someone to one attribute or judge someone based on one element of who they are.

Pope Francis reminded us of that this week as well. During a homily at mass last Wednesday at the Vatican, the Pope said that all people are redeemed by Christ’s sacrifice and invited his hearers to meet all people, whether they believe or not, at the place of doing good works. The fact that he included atheists among those who are redeemed by Christ and invited to do good works shocked many. But perhaps what we should be surprised at is not that unlikely and unexpected people demonstrate faith and do good works, but that we consider them unlikely and unexpected in the first place.

After all, Jesus commends the faith of this Roman centurion – and here’s the mind-blowing element of the story – even though we have no particularly good reason to believe he becomes a follower of Jesus. I mean, he does not ask to follow Jesus or confess him as the Messiah or even seem particularly interested in meeting him. He simply sees in Jesus authority that he recognizes and, quite frankly, needs. Maybe he becomes a disciple, maybe not. Neither Jesus nor Luke seem particularly interested. Instead, Jesus praises his astounding faith and Luke records it.

Which brings to me an observation and question regarding this week’s sermon, Working Preacher. First the observation: I’m willing to bet that almost every person who will hear your sermon this week knows and loves someone who isn’t going to church, or isn’t particularly strong in their faith, or isn’t a Christian at all. Perhaps this week’s sermon can be for them, inviting them to imagine that this person is also beloved of God, that this person is also being used by God to do good things, that this person may demonstrate faith that even Jesus would commend. Untold numbers of our people love family members and friends whose relationship to the church is sketchy at best and about the only thing they hear about these folks is from the most conservative quarters of the church saying that if these folks don’t believe they’ll go to hell. Perhaps this Sunday we could offer a different voice, a voice that merely points to this interaction between Jesus and the centurion and invites a comparison with some of the people we know that we love but do not believe as we do.

And now for the question: Might we pray for these folks this Sunday? Pray a prayer of thanksgiving that they are in our lives, pray that God would use them to do God’s will in the world (even if they wouldn’t call it that), and pray that we would have an the grace and courage to commend their good works and share with them our gratitude for them and our faith that God loves and uses them?

And could we pray one more prayer as well? Could we also pray that we might be less surprised that God uses people we have decided are unexpected or unlikely to do wonderful things? Could we pray that God would open our hearts and eyes to see that God’s love, will, and work extends far beyond the confines of our church or faith and that the God who showed up in the man crucified on a cross regularly shows up where we don’t expect God to be and never, ever stops delighting in surprising us? Could we pray that, too?

I think if we can offer both these prayers we may reach a broad swath of our people with a message of hope, faith and, finally, really good news.

However you may approach these readings and sermon, Working Preacher, know that I regularly give thanks for the good God is doing through you. Keep it up – it matters more now than ever.