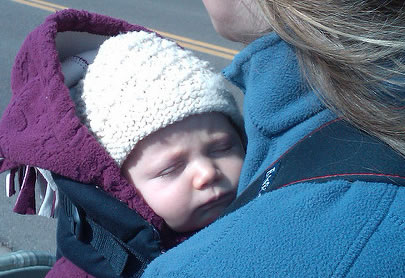 We moved my mom into a nursing home last week. If you are a regular reader of this column, you know that she has Parkinson’s. She also has been diagnosed with aortic valve stenosis, which she has chosen not to treat and I don’t blame her. Why have a heart that works when the rest of your body doesn’t?

In addition to all of the difficulties with such a transition is, of course, what to do with one’s possessions. While we may believe that we have been able to keep our belongings to a minimal level over the course of our lifetime, when you have to downsize, suddenly you’ve become a hoarder and resemble far too closely the man in the story from Luke. My mother comes nowhere close to the TV show, but it is rather overwhelming to think about where all of her things are going to go — and to whom. And it causes you to wonder if you should start now — that is, sifting through your own belongings.

The first thing that came to my mind?  Would I keep my Baby Bjorn? I have yet to be able to part with it (and my boys are six months shy of being 15 and 17). I have let other parents borrow it, but I ask for it back. My first son lived in it, until he was over two-years-old. He was premature, he wanted to be as close to me as possible, and there was no way I was having him in a stroller with all kinds of strangers wanting to touch him (I know — also first-time mom stuff). My second son lasted less than year before he realized there was a whole great world out there and moved right from the Baby Bjorn to skateboarding, as far as I can remember.

That’s just the tip of the proverbial iceberg. I’ve saved all of their Christmas outfits, the Thomas the Tank Engine trains. The Lego table. Then there’s my parents’ Wedgewood tea set, a dress I wore when I was nineteen to a New Year’s Eve Ball with a guy with whom I had been in love since I was a year old, and the champagne cork from my celebration dinner when I successfully defended my dissertation.

It’s not at all easy. How do you choose what to keep, what to give up? And, what are the criteria? A family connection? A special memory? Or, do you just keep it all, and forever, and let others figure it out?

The rub about this story from Luke is that we do not think of our possessions as greed, but as meaningful. They matter. Deeply.

There is nothing wrong with that inherently, but notice that for the man in the story, determination of what matters has everything to do with himself — and absolutely nothing to do with anyone else. There’s the crux of the issue. Our criterion for possessions, in the end, should not be about what we amass, but what we have that has meaning — and meaning should be determined by the presence of someone else. The Baby Bjorn only means something because I carried my sons in it. My parents’ tea set only matters because they bought it together when they lived in Europe. My New Year’s Eve dress means something because that guy was my first crush. The cork matters (and yes, I have it in a little plastic display box in my office) because my doctor mother took me out to dinner to celebrate my successful defense, champagne included.

But, this is not some sort of morality tale about adjudicating what to keep in storage and what to sell at the next garage sale. We need to listen carefully to Jesus’ last verse — a warning about those who store up possessions for the self, and yet are not rich toward God.

I am not convinced this is a parable about selling all you have and giving the money to the church.

I am not convinced that this is giving away all of your possessions and devoting yourself completely to God.

I am also not convinced that possessions are inherently bad.

But, I am convinced that Jesus is asking where your heart is. What means what to the other in your life? And that, Dear Working Preachers, is a very important question.

What you have, what you keep, what defines you materially is a measure of your self and who God asks you to be. Notice that the man cannot think about anybody but himself. The first person pronouns, the address to his soul? All about an inward focus. When talk continually comes back to the self, when leaders present themselves as the “only one,” that is not just a savior complex — it is the kind of ego that is void of empathy and discloses the narcissism that lies beneath. That is the MO of too many of our leaders, both outside and inside the church. Lest we think the church, or its leaders, maintains an altruistic stance uniformly, we need only to point out that its possessions are only for a few.

Our selectivity when it comes to whom to invite to the Lord’s Supper, our decisions to baptize in only certain circumstances, our insistence on ordaining only fifty-percent of the population, our resolve that bigger is better, the more programs for the masses is better, are all examples of the church determining that what it owns will be distributed according to its own measures. When the church gives only to the select, the chosen, then the church perpetuates a hierarchical structure that leads from a place of dominance and competition rather than a place of decency and compassion. And, as a result, the church has determined to give up the possessions most meaningful. The ones you maybe really want to keep. The ones who really want to be there. The ones who are making a difference in someone else’s world – even only one other person. And that is the problem with the “barn guy,” as the commentator on our website calls him. He doesn’t get — at all — that the Kingdom of God is a communal reality — even if it means only one other person outside of your very self.

At its heart, this parable is about the other, which is so Luke, if you think about it. That even those items you hold close to your heart should not be kept there if they do not benefit at least one other person in your life.

For now, I think I will hang on to my Baby Bjorn. Maybe one day I can have a conversation with my oldest son and tell him what that rather simple (although, first figuring it out back then was crazy complicated) contraption meant to me — and to him. And then, perhaps, I can let it go. Because letting go of what you have has to be for the sake of what can be. And, according to Jesus, when it comes to letting go of what we hold on to way too tightly, what can be has the potential to usher in the glory of the Kingdom of God.