Sing to the LORD a New Song 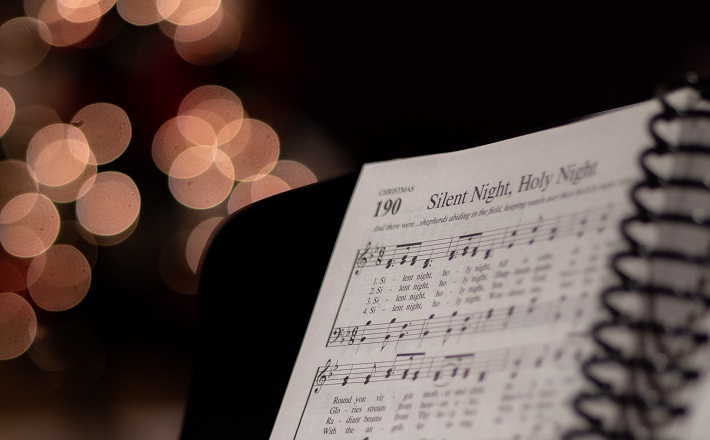 Photo by Aaron Burden on Unsplash; licensed under CC0.

It’s Christmas Eve, Working Preacher! The busy preparations and watchful waiting that have characterized the Advent season are drawing to a close, and we are finally ready to proclaim the birth of the Savior.

The lectionary suggests Psalm 96 for celebrations of the nativity, alongside the familiar scriptures of Isaiah 9 and Luke 2. As prophecy turns to fulfillment, as hope turns to praise, we are invited this Christmas Eve to sing a new song. But of all the church services at which to introduce new hymns, new Scripture passages, or new ideas, Christmas Eve would seem to be at the bottom of the heap. After all, so much of what we treasure about Christmas Eve is tradition, ritual, and continuity.

I am guilty of clinging hard to these expectations myself. I don’t know that a December 24 worship service counts as “Christmas Eve” in my mind unless at the end I’m holding a little white candle threaded through a paper disc, lifting the candle up during the final verse of “Silent Night,” and then blowing it out as the lights come back on and the pipe organ begins to play “Joy to the World.”

My spouse, a Working Preacher, has remarked that Christmas Eve sermons are among the most difficult for him to write. The texts are so known, so familiar, that pressure to find a “new angle” always seeps in—despite the distant echoes of theologians and preaching professors reminding us that the story is sufficient. When everything else is the same, how do you preach the text in ways that wake up sleepy ears? How do we sing to the LORD a new song, when the community has gathered to bask in the comfort of the old ones?

In Luke’s story of the nativity, as you know, there are lots of new songs: four canticles in the first two chapters of the book, often referred to by their Latin titles. Mary sings a new song, the Magnificat, which testifies to God’s mighty power to upend the oppressive hierarchies of the world. Zechariah’s song, the Benedictus, prophesies about the coming Savior and about Zechariah’s own son John, who will prepare the way of the Lord. When the angels appear to the shepherds in the field, they sing the Gloria. And when Simeon holds Jesus in his arms in the Temple, he sings the Nunc Dimittis, “Master, now you are dismissing your servant in peace” (Luke 2:29a).

All of these songs in Luke may be “new,” but they are not ex nihilo. They draw on long-standing prophetic traditions in the Hebrew Scriptures. The Magnificat echoes Hannah’s song from 1 Samuel 2. The Benedictus is thick with the language and tradition of the Old Testament, situating Jesus’ imminent arrival in terms of the God of Israel’s promises to Abraham, in the lineage of David, and with a metaphor straight out of the psalms: a “horn of salvation” (Luke 1:69; NRSV translates this as “a mighty savior”). The heavenly host joining the angels in their song also transports us back to the tradition of the LORD of hosts, commander of the armies of the heavens, which is particularly prominent in the Psalms but found throughout the Old Testament. For Simeon, the child Jesus is the culmination of ages of preparation and a lifetime of hope, an end as well as a beginning.

In an age when attention spans are shrinking and novelty is prized, it can be helpful to remember that Jesus the Messiah, for all of his newness, does not arrive out of nowhere. The good news of Jesus’ birth is part of the “old, old story”—or rather, old, old stories, and poems, and laws, and prophecies. In Bethlehem—as another old song goes—“The hopes and fears of all the years are met in thee tonight.”

After the shepherds witnessed the angels’ song and then saw the baby for themselves, they started telling the story: “and all who heard it were amazed at what the shepherds told them” (Luke 2:18). I think the shepherds remind us that telling the story is indeed sufficient. All who hear it will be amazed. And so, Working Preacher, as you put together your Christmas Eve sermon, take comfort in the tradition, ritual, and continuity. Remember you are one voice in the chorus of witnesses to God’s faithfulness through the ages. You don’t have to reinvent the melody, nor do you have to carry this tune by yourself! Singing to the Lord a new song can be as simple as adding your voice. The Spirit will do the rest.

Finally, Working Preacher, as the chaos of Christmas swirls around you, with services and pageants and livestreaming and family expectations and stresses of every kind, remember Mary. Mary did a lot of hard work in very unfavorable conditions. Then, while the world around her was in a frenzy, with glowing skies and singing angels and shouting shepherds, “Mary treasured all these words and pondered them in her heart” (Luke 2:19).

My hope for you this Christmas is that you are blessed with quiet moments to step back from the frenzy and treasure the joy of this day in your heart. Merry Christmas!