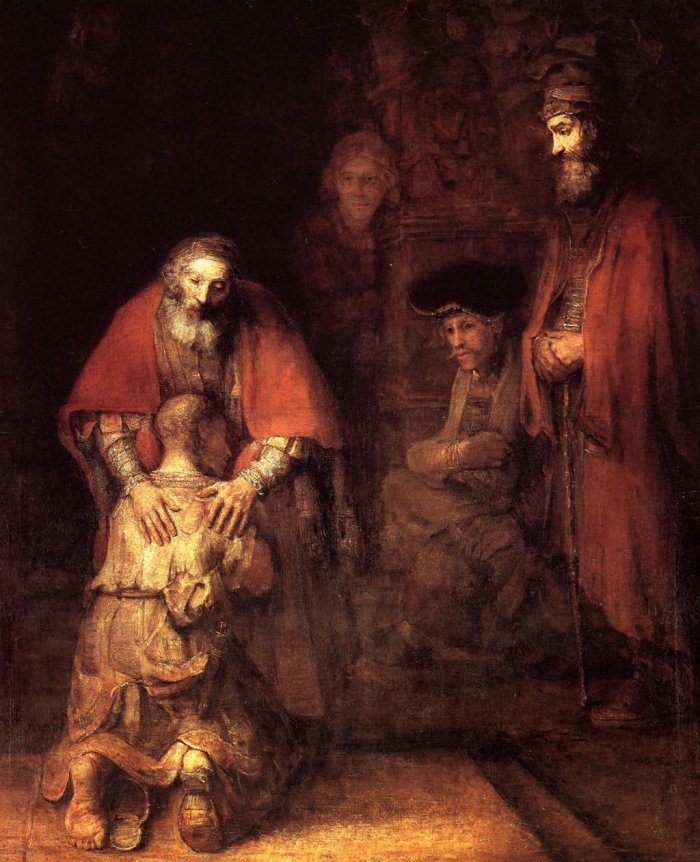 The Return of the Prodigal Son(Public domain image by Rembrandt van Rijn on ArtBible.info)

I’m not sure that there’s a more beloved story in the Bible than that of the Prodigal Son. Ralph Waldo Emerson called it the greatest story in the Bible…or out of it. Charles Dickens agreed. Along with the Good Samaritan, it is surely Jesus’ most famous parable. The question, of course, becomes how you preach such a famous and beloved tale.

The answer, I think, is to remember that it is, first and foremost, a story. You see, more often than not, we read Jesus’ parables as if they were Aesop’s fables, something from which we should derive a clear moral. But Jesus’ parables are stories, replete – unlike fables – with characters with whom you identify. Each of us has felt like the younger son – eager to get away, abashed by our mistakes, willing to do almost anything to get back to our old lives. Each of us has felt like the older brother as well – hardworking, diligent, and then resentful at the undeserved gain or unpunished wastefulness of another. And each of us has felt like the father in this story as well – desperate for a sign of a long-missed loved one, overjoyed by his or her unexpected return.

What we might do in preaching this story, then, is invite people to identify with one of these characters. Have them pick their favorite, perhaps ask them to retell the story from the point of view of that character. (And they should feel free, if it helps, to change the gender of the characters: a mother, two daughters, or a daughter and a son, etc.) They can do this kind of role playing in their imaginations, or by writing a few notes on a piece of paper or space provided in the bulletin. They could also talk about it with those around them. You might do the same, inviting some reflection and then choosing the character that strikes you as rife for exploration and offering your own first-person narrative.

Along the same lines, I think it would be pretty cool if a couple of people could take the role of one character and explain his or her “side” of the story. It probably wouldn’t be hard to solicit volunteers ahead of time and it wouldn’t take much direction. Again, these are characters we know, even have been.

I know this is different than most of our sermons, even most of our sermons on parables. But that’s the point. Parables don’t need to be explained, they need to be experienced so that they might in time be lived. Because the thing is, we do live this parable with all of its relational twists and turns regularly, and the more we can help our people see their lives and story in this story, they more likely they are to hear God’s earnest plea to them to come home (or into the party) and enjoy God’s great delight as they do.

In addition to inviting people to explore one character’s point of view, another possibility suggests itself, again keeping in mind that what we’re dealing with is not a moralistic fable or religious analogy but a heck of a good story. This time, think about focusing on just one major detail and go deep, inviting the congregation to enter the whole of the story through this one detail. I’ll suggest three possibilities briefly to illustrate what I mean, but there are plenty others that you may want to consider.

First, one of the things that strikes me in this story is the absolute foolishness of this father. In response to his son’s remarkably offensive request – asking for an inheritance ahead of time is akin to wishing your parents dead – this father goes ahead and gives it to him. Given that wealth is tied up in land, this isn’t about going to the bank but rather selling off tracts of real estate, herds, and more. And then, when his son has wasted all this away, he runs – something no self-respecting landowner would do – to meet his son, cuts off his lame apology, and restores him to his place in the family. Trust me, every single listen in the audience would have known that this kind of thing never happens, at least not in this world. Which is precisely the point. Jesus is introducing people to the relational logic of the kingdom of God that runs contrary to and way beyond the legal logic of the world. I’ve written more about this in one of my favorite and first Dear WP columns, so I’ll leave that here for now.

Another detail that consistently intrigues me is whether or not the younger son is truly repentant. Given the placement of this story in Lent, I think we’re invited by the lectionary committee to read it this way. But I’m not so sure. If you look at the story closely, what he “comes to his senses” about (v. 17) isn’t that he’s been a complete jerk but rather that even his father’s servants are better off than he. So is his repentant speech sincere, or just something he concocts to get himself back into his old man’s good graces? We just don’t know. Which raises a question: does it matter? Some people are probably truly repentant while others just come out of desperation. I’m not sure God cares because God is so overjoyed by their return. What would our congregational life look like if we took that seriously – our fellowship, our outreach, our evangelism, our youth and family ministry?

Finally, let’s not forget the older son. I mean, he’s right, isn’t he? In almost every possible way, he’s right – about his brother, about himself, about his ridiculously permissive and forgiving father. But, as I often tell my own firstborn son, sometimes we have to choose between being right and being in relationship. The elder son, too, ends up in a “distant country,” this one of his own making as he loses any connection to his brother, his father, or the others rejoicing in the new life his brother has been given. When might we, a preacher might ask, have to choose between being right and being in relationship? What makes that such a hard choice? Are there times that one of these choices is clearly better than the other?

None of these questions need be totally resolved in the sermon. That can be hard for us to do. We prefer closure – in our stories and in our sermons. But this story doesn’t provide that. It is deliberately open-ended. And that’s part of the point, too. The most important elements of life are rarely resolved but continue to pull us forward. Perhaps, just this once, our sermons can do that as well, resisting the temptation to wrap things up too neatly and inviting folks to keep thinking about this crazy family in relation to our crazy lives, all in light of God’s crazy love for all of us.

However you decide to preach this passage, Working Preacher, know that what you do matters. For it is as true as it is unbelievable that God rejoices more over the return of one lost soul than the ninety-nine righteous who never left. And your work helps announce that news. Blessings on your work and life.