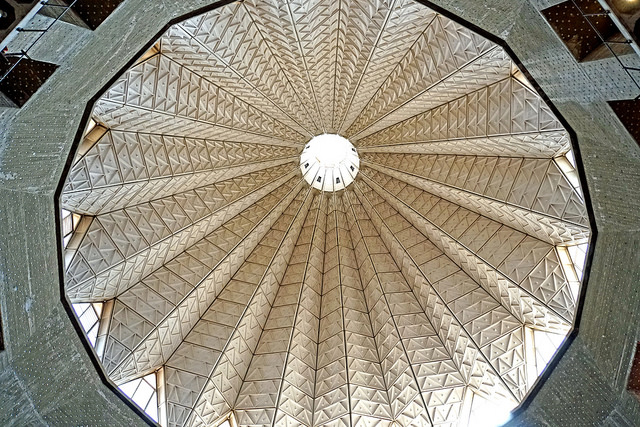 “Today this scripture has been fulfilled in your hearing.”

Or has it? Jesus seems convinced of it, at least. And to get a little Greek geeky on you, the verb “has been fulfilled” is in the perfect tense. That is, the Scripture has indeed been fulfilled in its hearing and the effect of such hearing is an ongoing reality. Or is it?

Because the rest of the hearing of Jesus’ sermon in Nazareth suggests that there has been little to no hearing, no effect at all. The captives being set free and the blind being able to see seems beyond the realm of possibility. Beyond the capability to believe. Bringing good news to the poor? Proclaiming release to the bound? To assert the year of the Lord’s favor? Yeah, right. That’s for next week’s sermon. Or a sermon never to be preached. After all, such sermons seem to lead to a cliffhanger, if you will. And no cliff any preacher wants to approach.

We read through the rest of Luke, even the end of Acts and assume so. After all, the man left in the ditch is seen and helped by the Samaritan. The son of the widow of Nain is raised to life. The prodigal son is welcomed home, even Zacchaeus is seen up in that tree. And gets a dinner party with Jesus.

Why? Because it’s our human propensity to leave Jesus’ sermon preached in his hometown as good news for those who first heard it; and leave it as the past teachings of an historical Jesus, for that time and place, with little to no demand on those of us who hear it anew, here and now. But, I do not think that was Jesus’ intention. “Has been fulfilled” is a promise to be sure. And yet, it is a promise for us to take on and fulfill. Otherwise, the ongoing reality of Jesus’ declaration of freedom risks the possibility of extinction. The possibility of eradication. The possibility of leaving Jesus’ promises in the past, which we are persistently prone to do.

On Facebook, I have been watching colleagues, friends, former students, and current students on trips to the Holy Land and I was reminded of my past trips, specifically, the Primacy of Peter, where Jesus, “could have, possibly, maybe, tradition says,” that Jesus appeared on the shores of the Sea of Galilee, prepared a meal for his disciples, and invited them to come and eat (John 21).

There is a plaque attached to the outside façade of the chapel that is built around the rock where Jesus hosted this last meal for his disciples. The plaque’s inscription is based on Luke 5:5, the calling of the first disciples in Luke, “Simon answered, ‘Master, we have worked all night long but have caught nothing. Yet if you say so, I will let down the nets.’” And so the plaque reads, “The deeds and miracles of Jesus are not actions of the past. Jesus is waiting for those still prepared to take risks at his word because they trust his power utterly.”

Next week, we will witness how prone people are to refuse emancipation to others, to deny seeing God in everyone. It’s beyond tragic. It is, at heart, an affront to the presence and purpose of the Kingdom of God and a clear rejection of Jesus’ sermon in Nazareth. People who truncate Jesus’ preaching. People who limit Jesus’ promise. People who think that Jesus is not for all but only for a select few. People who clearly have not read Luke 1-3.

Jesus needs us to keep on preaching his hometown sermon, now more than ever.